Blues unleash a bunch of fives! 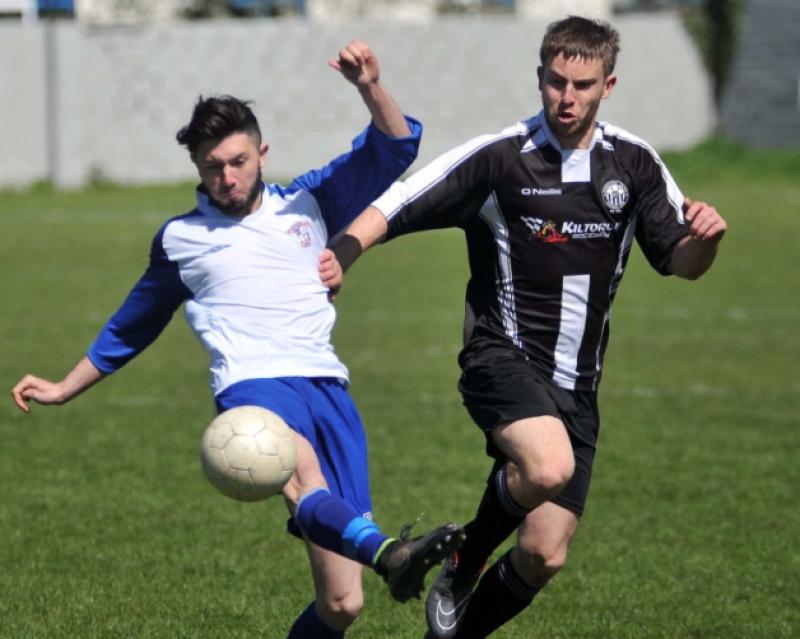 Freebooters A unleashed a bunch of fives as they secured the final place in the last eight of the McCalmont Cup.

Freebooters A unleashed a bunch of fives as they secured the final place in the last eight of the McCalmont Cup.

The reigning champions showed a ruthless touch as they - eventually - scored a convincing win over Stoneyford United in the last of the Cup quarter-finals on Sunday morning.

Patience, more than anything else, paid off as the Blues hit a late goal flurry and set up a meeting with St Ann’s.

United, who will be back on the Green next season after earning promotion to the Premier Division, almost caught their hosts out inside the opening minutes.

Stoneyford, who made a number of changes with a Divisional Cup final in mind, could have put a pep in their step when Simon O’Shea split the Blues defence and put Adam Fennelly through on goal, but his shot flashed just wide of the target.

It was a fright Freebooters heeded. Within seconds they responded in kind, David Rice delivering a killer pass that saw Ger Hayes speed through on goal. Left with only the ’keeper to beat the net beckoned but Hayes took too long over his shot, blasting it high and wide.

The hosts continued to look for a way through, but although they created chances the finishing touch was missing. Jason Hennessy could have opened the scoring when played through on 15 minutes but his shot was deflected wide. Cian Loy had a better chance, getting his head to Ger Hayes’ 26th minute corner, but couldn’t keep his effort on target.

The pressure finally told with eight minutes left in the half. Once again Ger Hayes was the provider from a corner kick, but this time he went low with his delivery, which the in-rushing Jason Hennessy swept home.

Much like the first half, Stoneyford came out swinging after the restart. Brian Donovan served notice, turning well before unleashing a solid shot, but Donal Brennan showed good hands to make a good save.

The visitors had a better chance on 50 minutes, when Brennan was rushed into making a clearance. The ball was seized by Simon O’Shea, who worked it back to Martin Murray, but he blasted his shot over the bar.

Freebooters came back into the game after that, but couldn’t increase their lead. Cian Loy had the best chance of all, losing his man and making space to get on Paddy Cahill’s excellent 58th minute cross, but he could only direct his header straight at netminder Brian O’Shea.

That miss might have looked costly, but the Blues - and Loy - made amends within 60 seconds. Racing on to Jason Hennessy’s timely pass, Loy did well to beat O’Shea at his near post with a wicked shot from the tightest of angles.

The goal acted like a breakthrough moment for ’Booters, who looked a different team in the final half hour. Their two-goal lead became three on 66 minutes via another set-piece - this time a Hennessy corner was deflected into his own net by Stoney’ defender John O’Shea.

The gap increased as the game moved into the final 15 minutes. Ger Hayes got the goal his performance deserved, slamming home a low shot across O’Shea after some neat footwork took him past several challenges on the edge of the box.

There was still time for Freebooters to finish with a flourish. Even though the game was in its final five minutes the hosts showed a strong work ethic. Kevin Ireland led the charge, recycling the ball from the corner and turning it into a clever pass back to Ger Hayes. He laid it off for sub Aaron Molloy, whose well-aimed shot inside the far left post saw the champs march on to the quarter-finals.