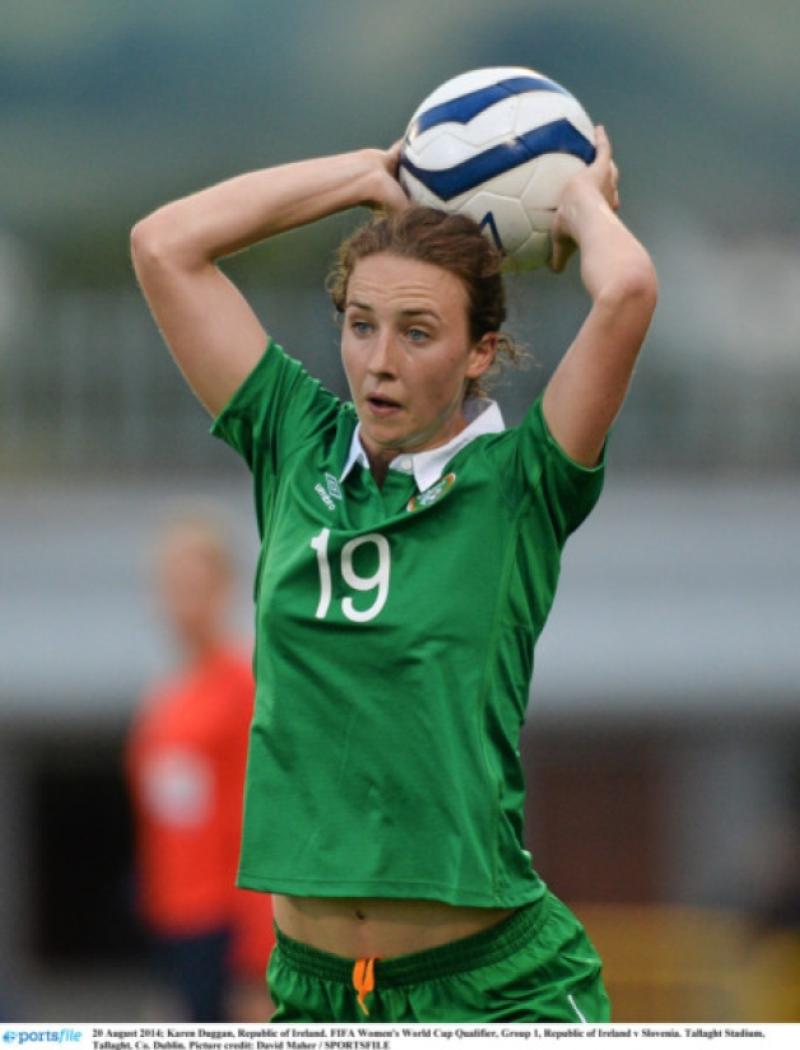 Their World Cup campaign may have ended in disappointment, but Karen Duggan is already looking forward to the Republic of Ireland’s next big challenge.

Their World Cup campaign may have ended in disappointment, but Karen Duggan is already looking forward to the Republic of Ireland’s next big challenge.

Piltown native Duggan, a member of the Republic of Ireland Women’s senior national team is already looking forward to the Euro 2017 qualifying campaign - even though it doesn’t start for another 12 months!

“We have got this experience now and we have got a young squad,” said Duggan, speaking in the aftermath of Ireland’s defeat to Germany.

“I think this campaign will bring us on leaps and bounds from where we are now. We will be more mature, fitter and stronger when the next campaign starts so it bodes well.”

It’s been a good campaign for Duggan, who was one of the players who benefited from the back-to-back defeats at home to Germany and Russia last Spring.

A fringe player, she was one of three changes to the Irish back four for the game against Croatia in June. Having shipped six goals in two games, Ireland went on a run of four clean sheets that was only ended by World No.2 and European champions Germany, who beat the Girls in Green 2-0 in Heidenheim.

“I came into the team after the Russia game and we managed to keep a few clean sheets so, personally, I am happy with that and the back four are pleased with the record we had,” she said.

“It’s not a bad record, although I would have liked to have kept the record up in that Germany game. It wasn’t to be, but we did keep a clean sheet in the second half.”

Those clean sheets and getting a run of games under her belt were the personal highlights for Duggan, who had to wait patiently for her chance to stake a claim for a place in Ireland’s starting XI.

“I have been waiting a while, just hoping for a break with the team, so I was delighted to get a few caps to my name,” she said.

“It’s nice to get a few consecutive games. It helps shake off the nerves and you feel a bit more confident because you gain confidence with each game you play.

“Hopefully I can keep getting a few games in and establish myself as a main payer in the squad.”

Looking back from a team point of view Duggan admits that there were highs and lows in the World Cup qualifying campaign.

There were some disappointing performances, but these were balanced by being beaten only once away from home. Sue Ronan’s team also kept six clean sheets in 10 games, finishing on 17 points.

Ireland went into the Germany game on the back of a 1-0 win away to Slovakia. That win, coupled with Germany’s 4-1 victory over Russia, meant Ireland went into the final qualifier away to the Germans with a chance of taking second place in Group One. That result extended their unbeaten run to four games and saw them go 407 minutes without conceding a goal.

”Only one away loss to an unbelievable German side is a good record,” reflected Duggan. “We set out to finish second but didn’t achieve that. However, we did get the highest points total that we’ve ever had, which is a good achievement so we have to be happy with that.”

While the home-based players will continue to train together each week at the National Sports Campus, the squad won’t come together as a group until the Winter training camp in January. Duggan admits they have plenty to keep them busy until then.

“Luckily enough we are still going to be busy with our clubs so it will help to keep us focused on football,” she said. “We are not going to be taking a massive break at all and we should be okay come the Cyprus Cup in March. We will start to build towards the Euro campaign from there.”

Duggan switched clubs during the summer, leaving Peamount United to join UCD Waves, the new addition to the Continental Tyres Women’s League. She is enjoying her new surroundings.

“We have couple of big games coming up over the next few weeks so they will be a good test to see where we are at,” she said.

“We are a new team and we are still trying to gel together. We have started very positively and it will be exciting to see where it will go.”