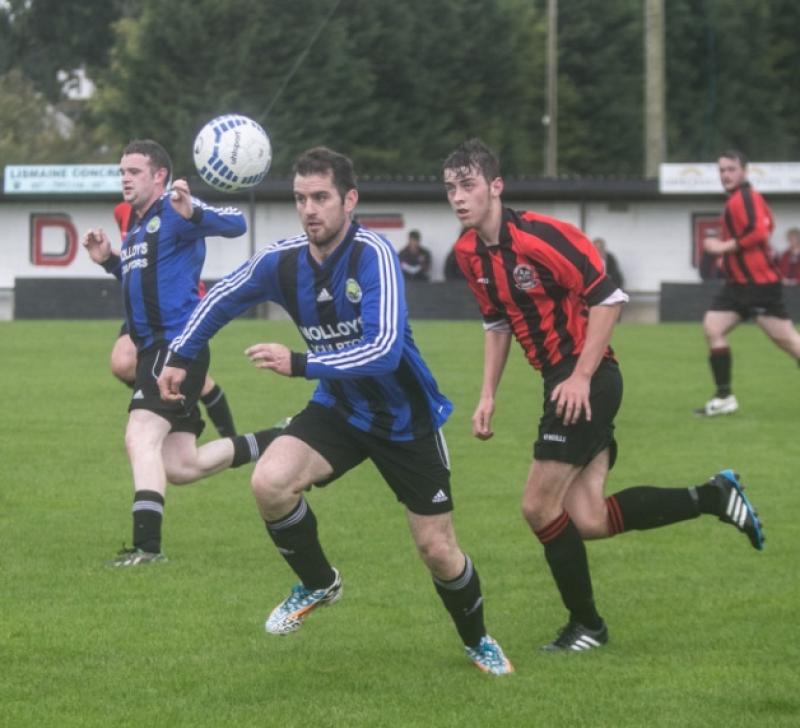 An impressive combination of patience and pressure paid off as Deen Celtic fought back in the opening game of their Division Two campaign.

An impressive combination of patience and pressure paid off as Deen Celtic fought back in the opening game of their Division Two campaign.

The Castlecomer side showed great perseverance, battling through an injury-plagued 90 minutes to earn a share of the points.

For long spells it looked like River Rangers, visitors to Castlecomer on Sunday, would take all three points after Darragh Murphy’s first half goal. They did well to repel everything Celtic threw at them but cracked 25 minutes from time.

Richie Lynch was the man of the moment for Celtic, darting between two Rangers defenders to pick off Ciaran Fahy’s dangerous diagonal cross from the left wing.

Lynch’s first touch killed the delivery. His second saw him take the ball away from goalkeeper Mitch Corrigan, before tapping home the equaliser with the all-important third touch.

Both sides were quick out of the blocks in the opening stages as if to try and quickly stamp their authority on the new season. Rangers were first to have a pop at the target, Gearoid Murphy driving a half-volley at goal from a Ben Hayes flick-on, but his fourth minute effort never troubled ‘keeper Richie Lynch.

Celtic took a little longer to show their teeth but, when they did, it almost led to the opening goal. Sparked by Johnny Dowling and John Doheny - they really impressed in the centre of Celtic’s midfield - a clever pass released Eoin Brennan down the right. Cutting into the box Brennan got his shot away as Mitch Corrigan raced from his line, but the ‘keeper did enough to make the midfielder loft his strike into the side netting.

The home side kept on the attack after that, but couldn’t make their efforts count. Robert Brennan flashed a 16th minute shot wide of the mark while Richie Lynch, after a superb turn to make space, was denied by Corrigan, who spread himself to save the 22nd minute effort.

The game took a turn for the worse for Celtic around the half hour mark. First they lost Peter McPhillips to injury, then got a scare as Graham Lawlor prevented them from falling behind just 60 seconds later, the defender doing well to hook Shane Murphy’s spinning header off the line.

They didn’t heed the warning, however, and paid the price in the 33rd minute. A long throw-in from Tom Collins caused all sorts of problems in the Deen defence as it soared towards the box.

Ben Hayes was quickest to react, stooping at the near post to flick the ball towards the centre of the goalmouth, where Darragh Murphy pounced to stab home.

The goal was areal blow for Celtic, but worse to follow. Another spell of Rangers pressure almost yielded a second goal, Paddy Dalton cutting inside the full-back to make shooting room.

The 43rd minute shot was blocked by Michael Moran but at a cost. The central defender was injured in the process - he would not come out for the second half.

The half ended on another miserable note for Celtic, who thought they had equalised on the stroke of the interval. Robert Brennan got the final touch to force sub Andrew Dowd’s cross home, but the cheers were cut short as the ‘strike’ was ruled out for offside.

Things went from bad to worse for Celtic after the restart, when the injury jinx completed its hat-trick inside six second half minutes.

The loss of Cian Young meant that all three of the Castlecomer changes were forced through injury - affecting two of the original back four - but despite this they never threw in the towel.

Shuffling their pack, Celtic pushed forward. They had strong claims for a penalty after Richie Lynch went over in the box after pouncing on a miscontrolled ball, but their shouts were waved away.

Undeterred, they kept looking for a way through. Sub Sean Feehan thought he had provided after the hour mark, when Robert Brennan’s clever flick gave him the perfect angle to strike from close range, but Corrigan got down smartly to his left post to push the ball to safety.

Their persistence paid off just six minutes later when Lynch finally found the net, but the hosts weren’t content to sit back and settle for a draw.

Pouring forward, Deen Celtic continued to search for a match-winner. A neat link-up between Johnny Dowling and Richie Lynch almost provided it on 76 minutes as the duo worked a quick corner on the left. When the ball came back to him Dowling unleashed a stinging drive, but Corrigan got his finger-tips to the shot to turn it over the bar.

Rangers had played second fiddle in the second half (they had Corrigan and Shane Murphy to thank for remaining on level terms) but they almost nicked another goal out of the blue nine minutes from time.

With Celtic on a constant surge for the winning goal, a lightning-quick move almost cost them the game. Darragh Murphy sparked panic when he flicked on a booming Corrigan kick-out nine minutes from time. The ball fell to Jason Dermody, who blasted the ball goalwards.

Goalkeeper Robbie Lynch managed to get something on the shot but the ball squirmed out of his grasp - much to the home side’s relief it looped skywards, clipping the top of the bar.

Back came Celtic, but try as they might there would be no winner. Richie Lynch went closest, pouncing when Corrigan pushed a Dowling free into his path, but he blasted his 85th minute shot over the bar.