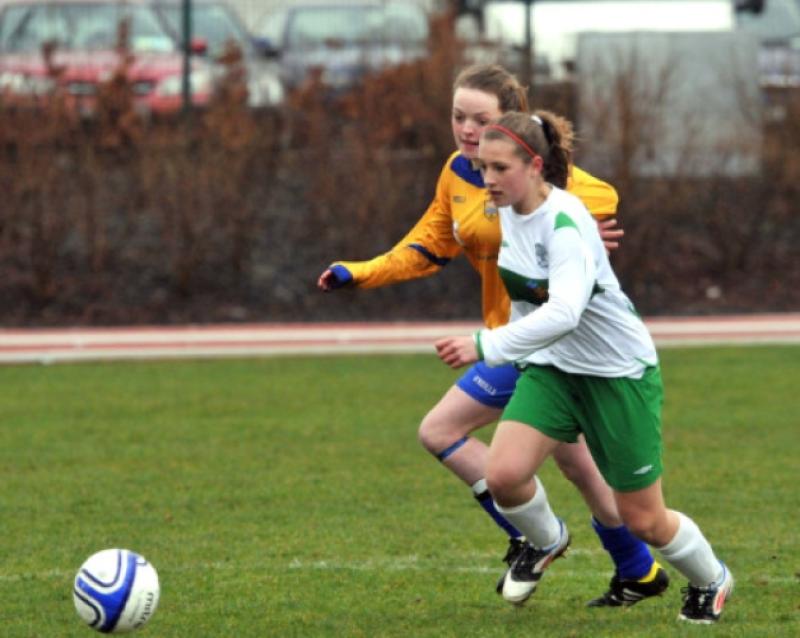 GREEN WAS the colour as Evergreen gave a five-star performance to land the Women’s Shield.

Despite the terrible conditions, the ’Green girls were dominant as they bettered Bridge United to secure the first title of the women’s season at a rain-soaked Scanlon Park.

The rain did little to dampen the enthusiasm of Barry O’Neill’s team, whose crisp passing and ability to make full use of the pitch helped them take a firm grip on the game from early on.

It didn’t take the city side long to exert their dominance, opening their account after just eight minutes. Laura Murphy gave the Girls in Green a dream start when she latched on to a looping ball from midfield, using her pace to beat the last two defenders before coolly slotting the ball inside the left post.

Evergreen smelled blood after that first strike. They maintained a strong presence in attack, a tactic which saw them keep Bridge on the back-foot. Olivia Nolan gave a clear sign of that intent, whipping in an 11th minute free which spread panic when it flashed across the box but the ball was just beyond the reach of striker Nicola Leonard.

The city side kept the pressure up, and were rewarded when it yielded a second goal just five minutes later. Midfielder Danielle Kelly did all of the legwork, seizing on a loose ball just inside the Bridge half, pausing only to shrug off a few tackles as she surged towards the box.

Evergreen did get a bit of a lucky break in the ensuing moments, as Bridge netminder Louise Doyle dashed from her line to cut out the danger. The keeper was quickest to the ball but saw her attempted clearance cannon off the outstretched leg of Kelly, who continued her run before finishing to an empty net.

Bridge were stunned by that quick brace, but regained their composure as they looked for a way back into the game. Tamara Agar almost pulled a goal back on 20 minutes when she seized on a slack Evergreen clearance and bore down on the goal, but Aoife Brassil made a timely block to save her side.

Undeterred United kept pushing on, going close to breaking their duck again on 34 minutes. In a sweeping move involving Agar and Lauren Barcoe that flowed into Evergreen territory, Bridge were presented with a chance to threaten when Joanne Barcoe was fouled just outside the left corner of the box, but Lauren Barcoe blasted her kick over the bar.

United looked to have turned the corner, but Evergreen took the wind from their sails when they hit back with a killer blow nine minutes from half-time. Skipper Sinead Corrigan did the damage after colleague Nicola Leonard won a Bridge kick-out, controlling the bouncing ball and showing her marker a clean pair of heels before smashing it home from distance.

Any hopes Bridge had of staging a second half were all but quashed within two minutes of the restart. Nicola Leonard was the heart of the move again, storming down the right flank before picking out Laura Murphy with a eagle-eyed pass to the centre.

With the Bridge back four in sixes and sevens, the striker saw her chance and took it. Nipping through a gap in the defence, Murphy steered home a sweet low shot that all but secured the spoils with plenty of time remaining.

Bridge might have been down, but they weren’t prepared to throw in the towel just yet. Spurred on by their supporters they hit back and enjoyed a good spell of possession.

Taking control of the ball led to chances for the Goresbridge girls. Lauren Barcoe went close with a shot that clipped the outside of the post on 49 minutes. Shauna Murphy went even closer, picking up a loose ball and letting fly from long range just before the hour mark, but Evergreen goalkeeper Kirsty Maher was relieved to see the ball clatter off the top of her crossbar.

However, they couldn’t stop a rampant Evergreen from rubber-stamping their emphatic victory 16 minutes from time. Sinead Corrigan played a big part in the goal, breaking through the centre and drawing the Bridge defence out of position to make the challenge. Corrigan had enough room to thread a quick pass through to Sonia Buggy, who sprang the offside trap and raced ahead to pick her spot.

There was some consolation for Bridge, who gave their support something to cheer about when Joanne Barcoe beat Kirsty Maher with a sweet looping shot in the closing minutes – but there was no denying who the winners were.