Brookville are ready for battle 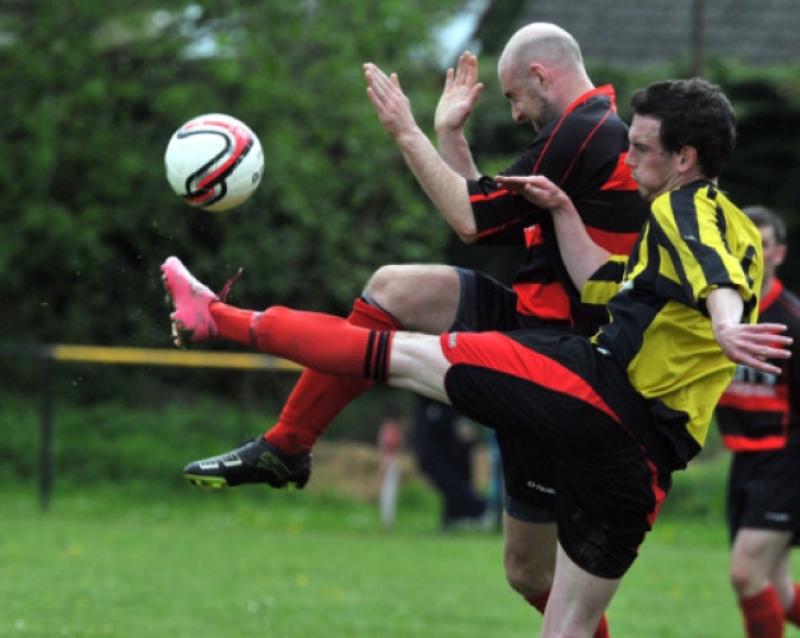 IT’S BEEN nothing short of a fairytale season for Brookville. However, Ballyragget’s finest are determined to make sure the last chapter has a happy ending.

IT’S BEEN nothing short of a fairytale season for Brookville. However, Ballyragget’s finest are determined to make sure the last chapter has a happy ending.

The Division Two club upset the odds, and made the rest of the Kilkenny & District League sit up and take notice, when they saw off champions Callan United to reach their first-ever McCalmont Cup final. This weekend they will and Newpark A will form a final pairing few would have predicted, but none could argue they are not there on merit.

“We’re delighted to be in the final,” manager Niall Bolger told the ’People. “However, the team deserves to be there because they’ve played well throughout the competition, especially in the last two rounds against Fort Rangers and Callan United.

“I don’t think they were fluke results,” he said of the quarter-final and semi-final games. “They were very competitive.”

It’s not just the last two games that show what Brookville are made of. Their route to the final was not without its difficulties, not least from the opening game.

Brookville have been the comeback kings of this season’s McCalmont Cup. In the first round they were 2-0 down to Freshford Town before sub Stephen Ruth came on to shoot his side back to level terms. Ruth then turned provider, setting up Anthony Butler to win the game in extra-time.

They faced a greater challenge when they trailed Lions B 3-1 with six minutes left to play in round two. A swift exit loomed, but a 90th minute penalty from Gary Hogan saw them complete an incredible comeback. Hogan, who scored the first goal before Ruth added the second, went on to cap a memorable day when he completed his hat-trick in extra-time. As a sign of his cool nature, all of his goals came from the spot.

The challenge was in no way smaller when they were drawn away to top flight Fort Rangers in the quarter-finals but by now Brookville had the bit between their teeth. John Doheny made it 1-0 to the visitors who, although pegged back, struck on the double through Alan Ruth and Doheny to stun the hosts.

The semi-final was another close call, but that 4-3 win over Callan United highlighted the battling spirit that has seen Brookville stamp their authority on the competition.

“There certainly is character there in the team,” said Bolger. “It was great to see as we haven’t had a good time of it in the league.

“Between lads being away with work and injuries we were chopping and changing the team a lot over the season. We also wound up playing a few games in the Winter months on pitches where the games were a pure lottery.

“The lads, a good footballing team, lost a few games and maybe we dropped our heads a little when the league was out of reach, but as soon we got near the Cup end of the season we got things back in order again,” the manager added. “The pitches getting better helped, as it suited the type of football the lads like to play.”

Brookville may have been underdogs in the quarter-final and semi-final, but they never let that tag affect them. “That’s the way it is for most underdogs,” Bolger offered. “They like to be that way - who likes to be the favourite going into any Cup game? With most of these games the further you go in a Cup competition the more it suits you to be the underdog.”

Brookville will be underdogs again for the final, but are all set to face Newpark. Having had the opportunity to watch their semi-final against Freebooters, Bolger knows what to expect from the city side at 3pm on Sunday.

“It will be a very good game,” he said. “Both teams really want to win this competition.”

Whichever side wins on Sunday, it will be their first time to get their hands on Kilkenny junior soccer’s top prize. For Brookville, this first final appearance is something to be cherished by the club and its proud community.

“I’m involved with the club a long time, and in all my years I can’t remember the team making the McCalmont Cup quarter-finals,” said Bolger. “To do what they have done this season is a huge achievement.

“Hopefully we will be able to go one step further,” he added. “The lads are happy to have made the final - but they don’t want to leave it at just that.”