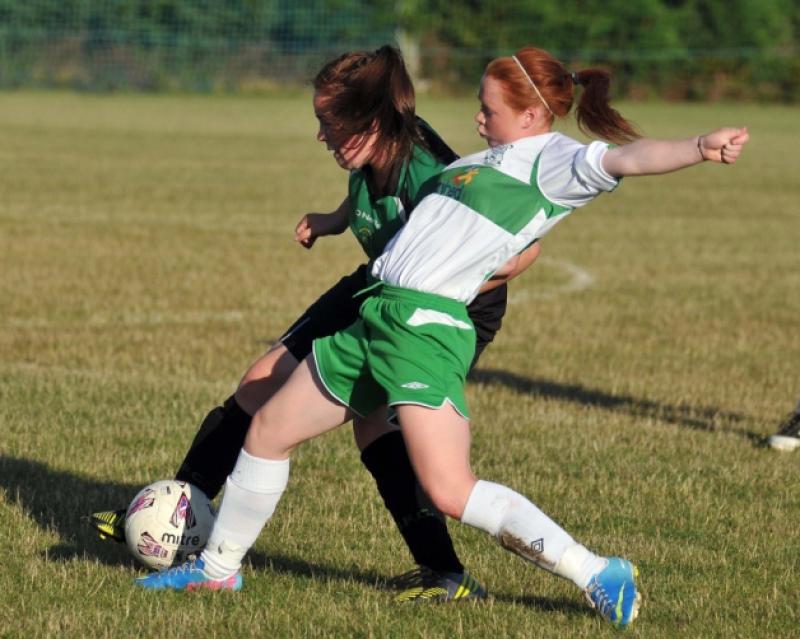 Two strikes from a brace of set pieces scuppered the Cup hopes of the Evergreen’s under-16 girls’ team.

Two strikes from a brace of set pieces scuppered the Cup hopes of the Evergreen’s under-16 girls’ team.

The city side were hit by a swift double whammy which saw Dublin outfit Peamount United advance at Evergreen’s expense to the semi-finals of the FAI Women’s Cup, writes Trevor Spillane.

The turning point came when a fired-up Evergreen, already in the lead thanks to Becky Walsh, charged forward in search of a second goal. Jenny Clifford sparked the move when she raced in to block down Shawna Bates’s clearance on the hour.

Breaking through with the ball at her feet, Clifford was left with just netminder Brooke Dunne between her and a second Evergreen goal. The strike was powerful, but her shot flashed over the bar.

Had Evergreen gone two up, they could have killed Peamount off. Instead, within three minutes they had been hauled back.

This was another blow for Evergreen as Peamount’s equaliser, when it came, had some good fortune attached to it. Barry O’Neill’s side seemed to have weathered the storm when they defended Chloe Murphy’s 63rd minute corner, but the visitors were awarded a penalty when Emma Byrne went down under the returning dropping ball.

The spot kick seemed harsh on the puzzled hosts, but Peamount made it count. Eleanor Ryan-Doyle stepped up and made it count, hammering a confident spot-kick past Niamh Delaney.

Worse was to follow for Evergreen as Peamount’s next attack yielded the winner. Delaney made a super save to turn Chloe Murphy’s menacing free-kick around the post, but could do nothing to prevent Jess Gargan’s corner from curling into the net.

It was a frustrating end to an evening which started so well for Evergreen. Although Peamount opened with a confident swagger (as any side boasting seven Irish internationals in their starting XI would) their stride was quickly checked as the hosts began to impose themselves on the game.

Much of the early running came from Jenny Clifford, who appeared to be everywhere as she closed down every Peamount opportunity, while Olivia Nolan and Laura Greene began to exert their dominance on the central midfield battle.

It took Evergreen time to turn possession into chances, but when they did they oh so nearly paid off. Becky Walsh went close to opening the scoring when she let fly with a raking shot towards the left side of the net on 21 minutes but Brooke Dunne got across the boot the ball off the line.

Evergreen gave the first sign they could cause an upset 13 minutes before half-time. Olivia Nolan sparked the move, controlling a dropping ball before teeing up Walsh on the left. She aimed for the far corner of the goal, but Dunne got down to make a smart save.

The danger wasn’t over, as the loose ball spilled into Laura Murphy’s path. She clipped a clever shot back across the goalmouth, but somehow Dunne stretched far enough to claw the ball back before it could cross the line.

Dunne was doing her best to frustrate the ’Green, and came to her side’s rescue in the final seconds of normal time. Awarded a free for a foul on Becky Walsh, Clifford stepped up and curled a belter of a shot from the left side of the D over the wall and towards the net, but somehow Dunne got a finger to the ball and tipped it on the bar.

The ’keeper could do nothing about Evergreen’s opener, which came 11 minutes into the second half. Chasing after a dropping ball, Becky Walsh showed great determination to get between the last two defenders and poke a low shot past the advancing Dunne.

Evergreen were full value for the lead. They had played impressively, with central defenders Orla Conlon and Kirsty Maher rising in stature as the game progressed.

At that stage it looked the high-flying city side would be the ones to reach the semi-finals - but that late Peamount rally clipped their wings.