Hot-shot Emmet gets Rangers back to winning ways! 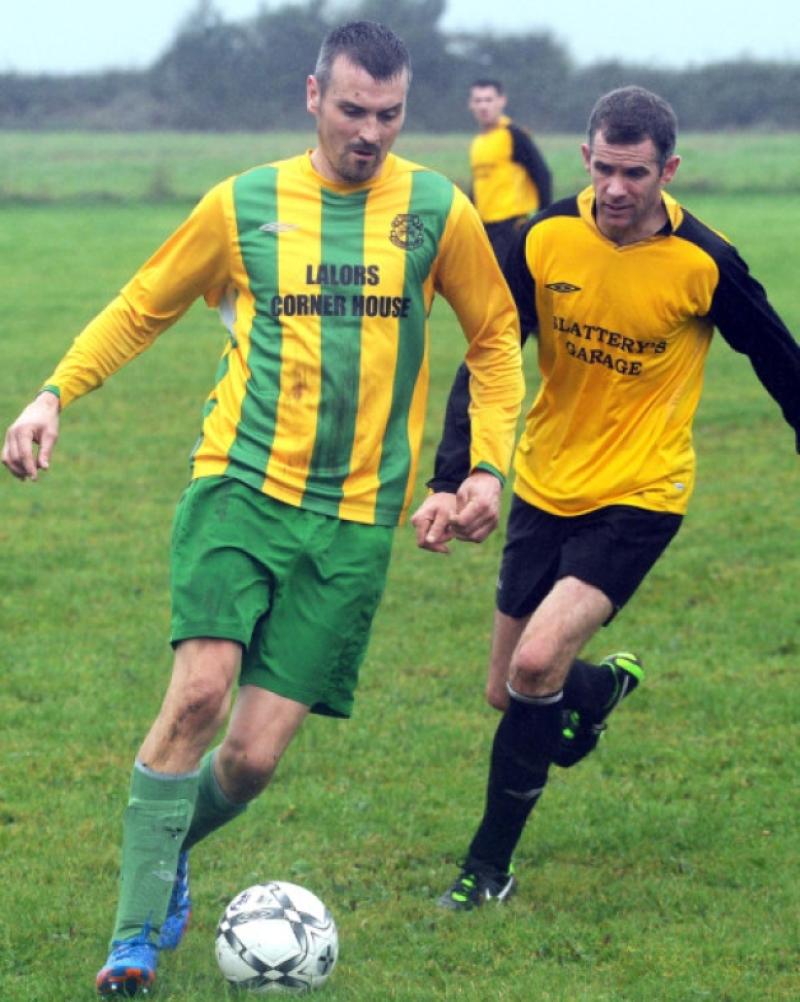 Emmet Nugent turned on the style as Fort Rangers finally got their first Premier Division win of the campaign and three precious points.

Emmet Nugent turned on the style as Fort Rangers finally got their first Premier Division win of the campaign and three precious points.

The young striker was the in-form player at Wallslough on Sunday, smashing in a hat-trick as Rangers showed great resilience to beat a new-look East End United A.

Scoring goals and creating chances hadn’t been a problem for Jim Cashin’s side. Leaking scores was their downfall, as they had conceded 17 in four outings.

With East End in a similar boat - they won their first game of the season, but lost the next three - the game took on the look of a real six-pointer for both sides.

It was no surprise that both teams started with a real sense of urgency, but it was Fort who pressed hardest for the opener.

They were quick off the mark too, Liam Forristal deflecting Wayne Dowling’s centred ball into the path of Aaron McDonald after just six minutes.

The young midfielder sped towards goal, leaving defenders in his wake, but Owen Ryan dashed from his line and managed to push the ball out to safety.

The danger wasn’t over, as Tony Moran fizzed in the resulting corner, but Emmet Nugent’s flick cleared the bar.

Fort kept moving forward, almost trying to batter their way through to goal. Emmet Nugent had their next chance, splitting East End with a run from inside how own half in the 17th minute, but Tommy Jordan raced back and managed to make a timely block.

At that stage it seemed a matter of when, not if, Fort would take the lead - so you can imagine the shock on their faces when East End went in front after 21 minutes.

The goal might have come against the run of play, but there was no denying it was well-worked.

Paul Murphy did well to get up highest and flick Richie Walsh’s free-kick down to Killian Phelan, who steadied himself and lashed the ball past Jim Nugent.

Fort were stunned by that goal, but quickly regained their composure to level matters on the half hour.

Tony Moran’s hard work paved the way to the equaliser, the midfielder battling well to retain possession before Emmet Nugent sprang McDonald free on the left. He kept his cool, pulling the ball back into the centre for the in-rushing Liam Forristal to slot past Owen Ryan.

Buoyed by that goal Fort went hunting for a second, but it was their opponents who almost found it. East End survived a sustained spell of pressure, almost making the perfect response when Jack McCarron picked up an attempted clearance outside the box.

McCarron saw his chance and took it, letting fly with a teasing 40th minute strike, but the ball curled just outside the post.

Just when it looked like the sides would go into the interval all square, Fort struck again. East End did well to repel shots from Nugent and McDonald, but were undone when Liam Forristal picked up the loose ball in midfield and cheekily lifted it over the top of the defence.

The ball fell straight to Emmet Nugent, who had time to control it before picking his spot.

Nugent continued to be a livewire well into the second half. He had the first chance when David Forristal headed a 47th minute kick-out into his path, but the striker flashed his shot over.

He made amends with his next opportunity, doubling Fort’s lead with 55 minutes on the clock. Again Nugent’s pace played a key role, as he sped past Danny Kinsella to pick up Aaron McDonald’s pass before he curled an unstoppable shot into the top right corner.

Rangers were rampant now, but East End were not about to throw in the towel. Liam Forristal went really close to netting his second of the game when he connected with a clearance and delivered a deft half-volley, but Owen Ryan made a super save, diving full stretch to his left to claw the ball round the post.

They had more work to do from the resulting corner, as Nugent whipped the ball towards the back post, but Kieran Dowling was on hand to head the ball off the line.

The let-off only postponed the inevitable, however, as Fort hit back for their fourth goal with 20 minutes to play.

Breaking from the back, Seamus McGrath cut out Wayne Dowling’s ball and surged forward, pausing only to set up Nugent to wrap up his hat-trick, despite the best efforts of Ryan.

Rather than give in, East End refused to wilt. Jack McCarron proved that with an excellent 72nd minute break, working the ball on for Killian Phelan to deliver an inch-perfect cross for Paul Murphy. Murphy’s header was a bullet, but Jim Nugent made a top-drawer save to deny the striker.

United ploughed on, getting a little reward for their efforts when sub John Hayes turned Tommy Jordan’s corner in at the near post, making it 4-2 with 10 to play.

That gave East End some hope, but they were undone when Jamie Monaghan was sent off for a foul on Emmet Nugent, Monaghan getting his marching orders for being the last man back.

Even more punishment almost followed when Tony Moran curled the resulting free-kick around the wall, but Owen Ryan made another fine save.