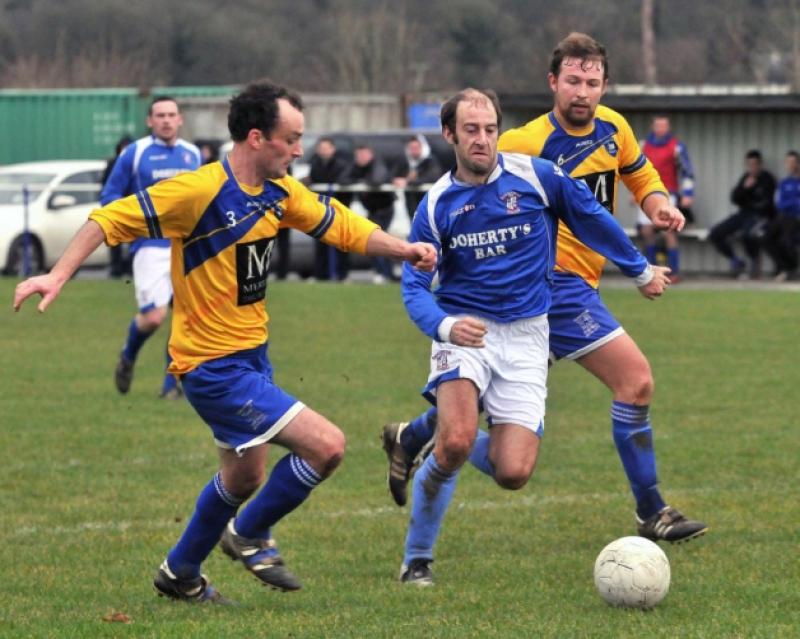 Christmas dinner will taste all the better after Freebooters A made sure they went into the festive season at the top of the Premier Division table.

Christmas dinner will taste all the better after Freebooters A made sure they went into the festive season at the top of the Premier Division table.

The Blues wrapped up their ninth win of the campaign in their last game before the festivities kick off, but they were far from gifted the points by Thomastown United A.

On a day when both sides battled against driving rain and dark skies, it was Greg Morton who lifted the Sunday afternoon gloom on the hour mark.

Helped by the strong wind Michael Lambert bombarded the United defence with a booming kick-out. Having been frustrated in his shooting attempts Aaron Molloy moved the ball on to Damien Raggett, who worked his way across the face of the box to find the right angle before releasing the ball.

When he did let it go, Raggett split Thomastown open with the perfect pass. His clever diagonal ball zipped straight to Morton, who steadied himself before drew netminder Rory Leadbetter off his line before beating him at his near post.

In a game where both sides craved the three points the action came thick and fast, with the visitors doing plenty of pressing. Right from the off they took the game to United, Aaron Molloy dashing on to James Kelly’s third minute pass before running at the Thomastown defence. Cutting in from the left Molloy fired off a shot that took a wicked deflection off Derek Brennan, wrong-footing netminder Leadbetter, but he was relieved to see the ball go wide of his left post.

The Blues showed a great injection of pace in their game throughout the 90 minutes, using it again to trouble the hosts on 12 minutes. This time Damien Raggett profited when United failed to deal with Cathal O’Leary’s long ball, but Leadbetter dealt with Raggett’s attempted chip.

Having weathered the early storm the elements played their part in Thomastown’s first crack at goal. William Flood was the provider, whipping in a 23rd minute corner which tested Michael Lambert. With Dean Broaders making a nuisance of himself in the six-yard box the Freebooters ‘keeper did well to connect with the ball, palming it away to safety via the crossbar.

The frame of the goal proved to be a real pest for both sides. Booters found this out just a few minutes later, going close after Raggett knocked an Eddie Clifford header down into Ger Hayes’s path.

Hayes found space to clip a shot with the outside of his right foot, sending the ball curling towards the bottom right corner of the net. His effort beat Leadbetter but not the post, the ball smacking off the upright before coming back to the netminder.

A see-saw game went back down the other end, with United going close to scoring themselves. Picking up Derek Brennan’s low free-kick, Andy Kavanagh left the Freebooters defence flat-footed with a teasing cross that picked out the in-rushing Dessie Walsh at the back post, but he could only guide his diving header against Lambert’s right post.

The Blues heeded that warning and wasted little time to open the scoring. The breakthrough came on the half hour, Jack Poyntz providing the assist when he headed a United free back from where it came.

The hosts were caught napping by the booming delivery and failed to prevent Raggett from latching on to the ball. Speeding into the box his first shot was saved by Leadbetter, but the striker was alive to the rebound, volleying it home.

The goal fired Freebooters up even further, but try as they might they couldn’t add to their advantage. James Kelly went close when teed up by O’Leary following a Molloy corner but he smashed his shot off-target.

Raggett went close to doubling his tally when he got his head to a Clifford cross (a move created by Jamie Lynch’s excellent 41st minute breakaway), but the final strike failed to trouble Leadbetter.

Thomastown did regain their composure before half-time, but it failed to provide a way back into the game. William Flood - one of three former Blues in the United ranks - went close when he let fly from distance out on the right, but Lambert was content to watch the ball spin wide.

The weather took a turn for the worse at the start of the second half, but ironically the wind and rain coincided with Thomastown’s brightest spell of the afternoon.

A stern team talk provided the perfect spur as, within five minutes, the hosts were level - and in some style.

Attacking with real force, Dean Broaders provided the ammunition with a great ball from the left. Steven Connolly moved it on to Andy Kavanagh, who showed incredible composure to flick the ball over the advancing defender before smashing an unstoppable volley past Lambert.

The goal was a shock to the system for Freebooters, but they responded in emphatic style. Damien Raggett tried his luck with a long range drive, Rory Leadbetter doing well to make a stop at his right post. Raggett - a real thorn in United’s side - went close again when he controlled a James Kelly cross on the corner of the six-yard box and lost his man with a neat swivel, but his shot was beaten away by a blanket defence.

’Booters were getting closer, and finally made the pressure count when Morton popped up to grab the winner on the hour. Thomastown were floored by that strike, but almost made the perfect reply after Dessie Walsh got on the end of vicious Derek Brennan free, but his powerful header spun away from the far corner.

The hosts pressed hard for a second equaliser, but Freebooters were in no mood to let their lead slip again. Dean Broaders must have thought he’d scored when he beat the netminder with an 83rd minute header, but Ger Hayes was on hand to hook the ball off the line.