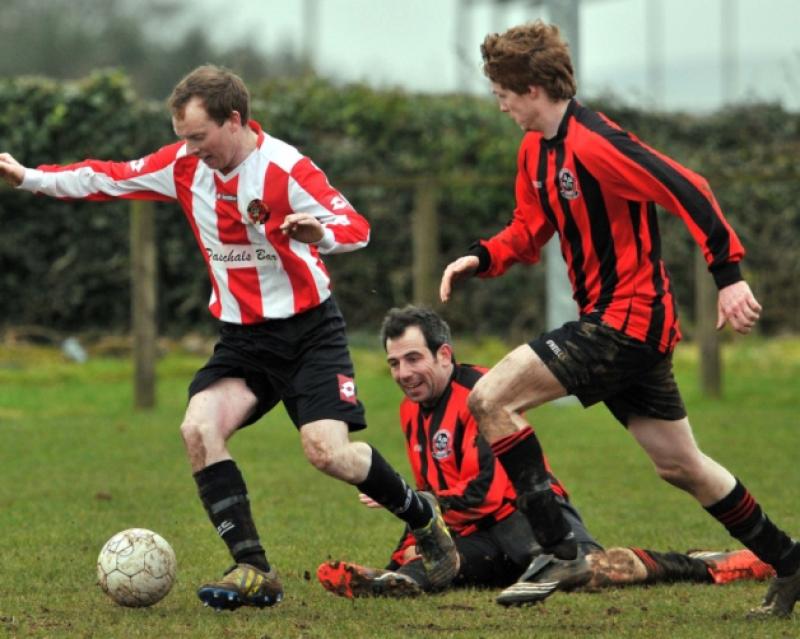 A little piece of inspiration from Richie Lynch saw Deen Celtic loosen Spa United’s grip on pole position in the race for the Division One league title.

A little piece of inspiration from Richie Lynch saw Deen Celtic loosen Spa United’s grip on pole position in the race for the Division One league title.

Lynch grabbed the only goal of the game as the Castlecomer side shook off the cobwebs in winning fashion, picking up all three points in Johnstown on Sunday, writes Trevor Spillane.

The visitors started with a strong wind blowing in their favour, but had to wait until eight minutes before half-time to make it count.

Picking up play on the right, David Lynch cut Spa open with a great raking diagonal ball to the opposite flank. Richie Lynch raced after possession, doing well to keep the ball in play. Turning towards the target, he whipped a high ball into the box which caught netminder Jason Ryan cold as it looped over the ’keeper’s hand and sailed into the top right corner.

Good fortune played its part in the goal, the wind putting a wicked spin on the ball, but it wasn’t achieved through pure luck. Deen were full value for the goal, having enjoyed the lion’s share of possession and chances, using that diagonal wind to peg the hosts back.

Despite not having played a league game for some time - Sunday’s match was their first local fixture in six weeks - Deen Celtic looked sharp from the off. With Jonathan Dowling and John Doheny dominating the middle they pressed and probed for an opening, but could so easily have found themselves behind inside the first quarter.

The visitors had stand-in goalkeeper Caleb Roche to thank for staying on level terms. With Robbie Lynch, Eoin Doyle and Eddie Brennan all missing through injury, bereavement and illness respectively, Roche stepped between the posts. He came to Celtic’s rescue on 18 minutes, making a great stop with his left leg to block Jason Moore’s point-blank shot after Stephen McCarthy’s corner fell at his feet.

While David Lynch went close with a free-kick that crashed into the Spa wall, Roche was called into action again soon after. Breaking from the right, Stephen Neary’s pass was turned into a defence-splitting ball by James Whelan for Mark Webster, who raced towards goal.

Left with Roche to beat Webster tried to chip the ’keeper but lost the one-on-one battle, giving James Sherwood time to race back and clear the danger.

Deen renewed their efforts after those scares, getting their reward when Richie Lynch broke the deadlock. They had a chance to double their lead on the stroke of half-time when David Lynch curled a menacing free into the box. Tom Dowling rose highest at the back and delivered a good header, but Jason Ryan was well placed to make the save.

The second half saw Spa up their efforts, but try as they might they couldn’t find a route to goal. Jason Moore had claims for a penalty waved away, while Caleb Roche did well to win a swirling free-kick while under pressure from Conor Tobin.

It was Deen Celtic who went closest to altering the scoreline. Neil Murtagh should have made it 2-0 when he escaped his marker and met Jonathan Dowling’s low cross with a cushioned sidefoot from inside the six-yard box, but he drilled his 57th minute shot straight at the grateful Jason Ryan.

John Doheny was next to have a pop at the target, springing the offside trap and racing through on 71 minutes, but his attempted chip went straight into Ryan’s arms.

With time running out Spa began to throw everything into attack, the tall defensive pairing of Jason Moore and Robert Burke leading the charge as they pushed their side forward. James Whelan also played his part in attack, but while his dangerous 80th minute free gave Deen a scare when it flashed into the box the ball was just beyond Conor Tobin’s reach.

Spa pressed and pressed until the end, going close in time added on when Moore got his head to a Whelan corner. For a split second the far side of the goal beckoned, but Deen heaved a sight of relief as the ball screamed wide of the mark.

With Spa going down 1-0 at home, Callan United used that slip-up to overtake their rivals and move into top spot in the table. They also dealt another promotion rival a blow as they beat Southend United 3-0 in Callan on Sunday morning.

Goals from Alan Costigan, Robbie Wall and Simon Burke did the trick for Callan, shooting them two points clear of Spa, with both sides having played 14 games apiece. Southend are still third, 10 points behind the leaders with three games in hand.

Incredibly, just nine points separate the seven sides outside the top two in this division. Freebooters B are bottom with eight points, four points behind a Stoneyford United side who beat the Blues 6-1.

Inspired by a Martin Murray hat-trick Stoney picked up their third victory of the campaign in style, James Moran, Conor Coffey and Kelvin Mguni also getting on the scoresheet for the winners.

The win - Stoneyford’s first since a 4-1 victory over Newpark B back in October - does little to improve United’s league position. They are still second from bottom, a point behind Deen Celtic, but Clover United and Tullaroan are now within their reach.