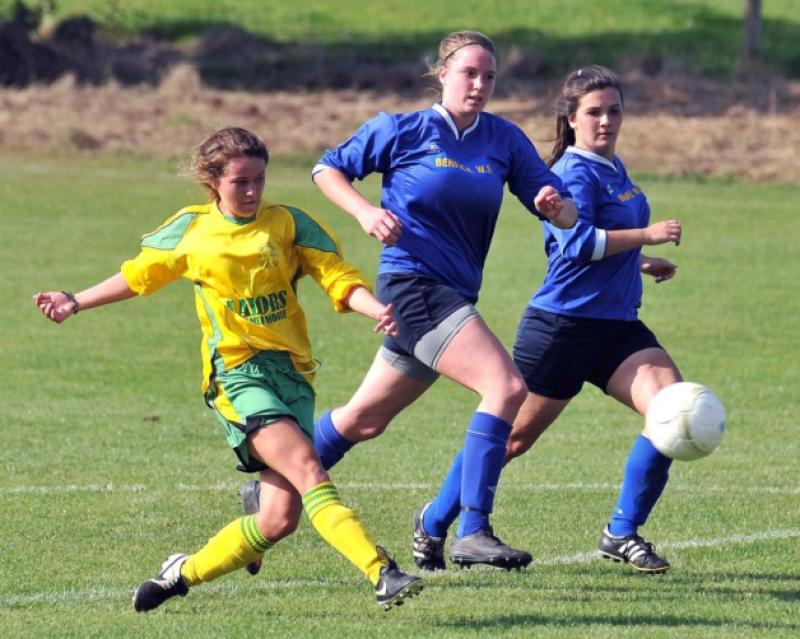 Kilkenny’s East End made a great start to life in the Wexford leagues when they hit a Waterford opponent with a bunch of fives on Sunday!

Kilkenny’s East End made a great start to life in the Wexford leagues when they hit a Waterford opponent with a bunch of fives on Sunday!

It was a real South-East mix when three of the regions counties linked up in Bennettsbridge for the opening game in the women’s league season.

East End, who made the move to the Wexford competition during the Summer, got their Premier Division campaign off to an impressive start as a mix of youth and experience blitzed their Waterford city opponents.

“Playing in a new league is challenging,” said United’s assistant manager Liam McEvoy. “You never know what you’re facing when you take on a whole new opposition, but it’s great that we made such a good start.”

It took United just eight minutes to replicate the form that saw them secure the domestic treble in Kilkenny last season. Nicola Foley provided the opening with a clever ball for Jenny Reddy to run on to. Reddy used her experience, drawing Sinead Flynn from her line before tucking the ball away into the far corner.

Benfica were bloodied by that quick strike, but were left seeing stars when East End hit a second punch three minutes later.

Racing to the left side of the box, Caoimhe Shiel picked up Laura Dooley’s cross and cleverly beat Flynn with a lofted diagonal shot that sailed over the ’keeper dropped into the top corner.

The Waterford side were stung by that early salvo, but showed they were no pushovers. Beserta Ajeti unlocked the East End defence with neat turn and shot, but Vivienne Holmes made a smart save before the follow-up from Andrea Holmes was blocked.

Ajeti was in the thick of things, hassling Holmes when the netminder tried to collect Becky Conroy’s 31st minute corner.

Winning the challenge, Ajeti turned the ball goalwards, but an East End defender managed to head it off the line.

East End suffered a blow when Dooley was forced off through injury, but Becky Walsh was well able to step up as an able replacement. Walsh had her first taste of the action when her powerful 43rd minute was well held by Flynn.

Her next involvement unlocked Benfica for a third time. Controlling the ball in the corner of the box, Walsh teed up Reddy to take possession and slam a daisy-cutter inside the left post.

East End started the second half in a similar fashion, but found the woodwork in their way. Ria Lawson hit the post with a 51st minute shot – the lively Zara Brennan clattered the bar from the rebound. A minute later, Caoimhe Shiel’s long-range strike beat Flynn, but again the bar saved Benfica.

The visitors must have thought their luck was changing, even more so when Becky Conroy fired home an impressive long range strike, but East End moved quickly to slam the door shut on a comeback.

Although they hit the woodwork again (the sixth time that afternoon) through Reddy, East End had better luck when the hard-working Walsh made it 4-1 in the 74th minute.

Watching Niamh Bolger’s long ball out of defence, Walsh sped past her marker and showed great composure to race to the edge of the box and tuck her shot past Flynn.

Although Andrea Holmes pulled another goal back soon after, there was no way East End were about to cough up the lead. Bolger made sure of it when, with eight minutes to play, she fired home a confident penalty to wrap up an emphatic opening day win.