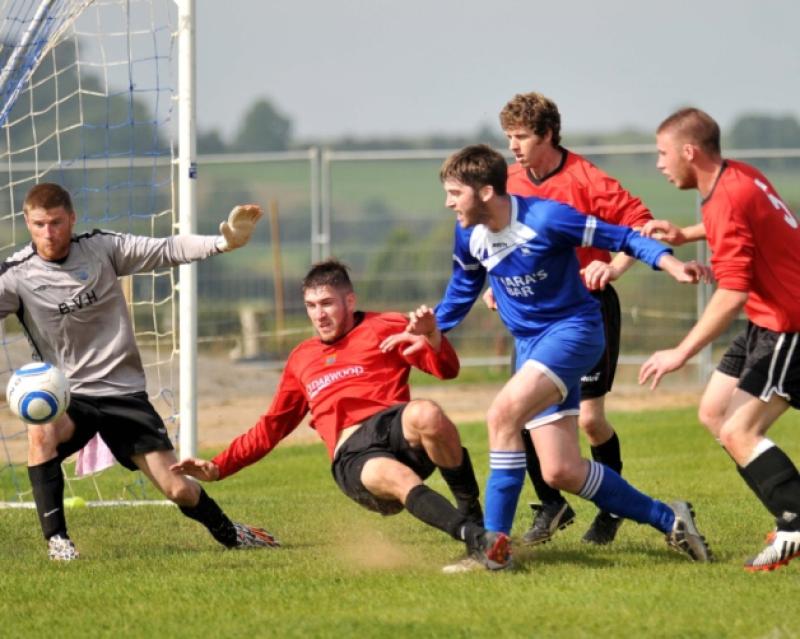 A healthy mixture of pace, power and nerve helped Thomastown United march into the second round of the Leinster Junior Cup.

A healthy mixture of pace, power and nerve helped Thomastown United march into the second round of the Leinster Junior Cup.

The Blues had to use all the elements of their game to get the better of New Ross Celtic in a South-East blockbuster on Sunday morning.

The biggest test for the hosts came not in the 90 minutes, but the injury-time that followed. Having endured five and a half minutes of constant New Ross pressure, United looked to have held out – but were left stunned when Celtic sub John St Ledger stole in at the back post to nod in a stoppage time equaliser.

Having worked flat out to hold their lead, United looked to have been flattened. They could have folded, but showed incredible resolve to get back on their feet and fight on.

Extra-time started with New Ross on the front foot, but Thomastown played a clever game and used the time to get their energy back. The tactic worked a treat; although the first half of extra-time largely forgettable, the hosts got their breath back.

The step up in pace didn’t come until the dying stages of the second half, but it proved to be worth waiting for.

Hitting top gear, Thomastown took the game by the scruff of the neck with a burst of chances, any of which could so easily have hit the net.

Showing strength and awareness to hold play up and then find the gap, Barry Whelan and Steven Connolly combined well before a quick one-two between Michael O’Neill and David Kavanagh split Celtic open. A defensive block denied O’Neill, while netminder Kevin Grangel had to look smart to stop Whelan’s follow-up shot.

However, the New Ross men weren’t safe yet. Kavanagh proved as much when, moving out to the edge of the box, he pounced on the ball as it spun loose.

Using a touch to flick the ball out from under his feet, he followed up with a powerful right foot strike that curled at the last second and nestled inside Grangel’s left hand post.

That was a knockout blow for New Ross. But, Thomastown had more in their arsenal...

While home sides are always keen to make a good start to cup ties Thomastown couldn’t have dreamt of how they’d begin the game. Little over 60 seconds had elapsed when the hosts found themselves with the chance to go in front after Michael O’Neill was fouled in the box. He got up to take the kick and made no mistake, driving his shot past Kevin Grangel.

The goal stung New Ross, who turned the game their way as they laid siege to the United goal. Led by Philip Drohan and Sean Culleton Celtic pushed hard for an equaliser but Thomastown netminder Paul Dunne frustrated the visitors.

Dunne did well to claw back Drohan’s dangerous low cross in the 12th minute. He went one better two minutes later, springing off his feet to get his fingertips to Eoin Rhodes’ shot which seemed destined for the top right corner of the net.

Led by the hard-working Andy Kavanagh United weathered the storm, fighting back to create some good chances of their own. Derek Brennan, an early sub for the injured Neil O’Meara, glanced an 18th minute header just shy of the far post.

Nathan Sherry also had a go, profiting after strike partner Steven Connolly intercepted a New Ross ball and laid it off for his colleague, but a heavy touch from Sherry gave Grangel time to race from his line and smother the danger.

The teams continued to play some fast-paced football, but couldn’t turn it into goals. United had the best opportunity to add to their tally when Mick O’Neill’s cross was forced back into the danger zone by Derek Kavanagh, but Connolly misjudged his 28th minute sidefoot shot.

That spurned chance could have come back to haunt Thomastown when New Ross roared into action in the second half.

Going at it from the off, Celtic almost carved out a 46th minute equaliser when Ben Duffy’s excellent diagonal ball split the hosts open. Eoin Rhodes ghosted in, sliding to connect with the cross, but he couldn’t steer his shot inside the post.

Thomastown reshuffled their pack, bringing Barry Whelan into the fray. He added some steel to their midfield and also helped out in attack, teeing up Sherry for a shot at the target following some good work by Connolly and Kavanagh, but Grangel made a solid save.

Whelan was heavily involved again in the 79th minute, going within a whisker of settling the tie after an O’Neill snapshot broke in the box. Fighting for the ball Whelan did well to win possession in tight quarters, but stabbed his shot outside the post.

It was United’s turn to feel left off the hook a few minutes later, when New Ross gave them a real fright. Junior Somers did the damage with a menacing cross, which Drohan met with a free header, but his effort clattered off the crossbar.

Although United survived that one, they weren’t as lucky when St Ledger nabbed the equaliser six minutes into stoppage time. However, rather than sink their hopes, United regrouped and regained the lead with Kavanagh’s 106th minute cracker.

There was still time for Thomastown to add a gloss to their high-powered finish. Awarded a free on the right side of the box, defender C.J. Browne showed a striker’s touch when he lashed home an unstoppable shot, silencing Celtic’s hopes with a stylish finish to an entertaining game.