United win on Whel’ of fortune 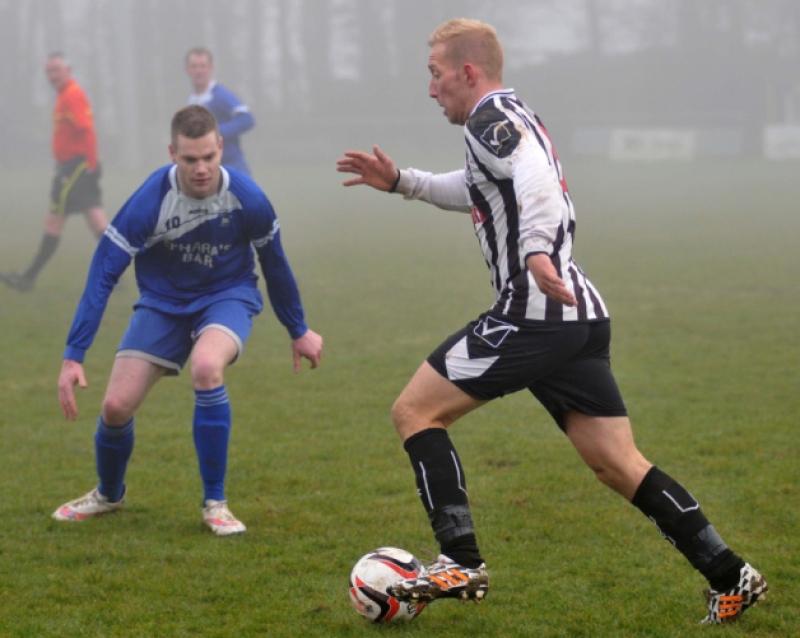 The race might have a few miles left in it, but Thomastown United are so close to the Premier Division title they can almost smell the trophy polish!

The race might have a few miles left in it, but Thomastown United are so close to the Premier Division title they can almost smell the trophy polish!

United took another massive step towards ending their long, long wait for the top flight spoils when they overcame some fierce pressure to beat a determined Newpark A.

When the season is over Thomastown will be able to look back on many memorable days from this campaign. A foggy February Sunday morning will certainly be there at the top.

Typically, games between a division’s top two sides are called a battle - even if they’re not. This one certainly fitted that bill. Newpark chased, harried and snarled after Thomastown at every turn, pushing for the win that would help them overtake the league leaders.

However, their charge was left stuck in neutral when the visitors plundered a precious winner.

Barry Whelan was the man of the moment, stealing in at the back post to ram the ball home after Sean Brennan’s half-blocked shot broke his way with 15 minutes to play.

Good as the goal was - exactly what the large number of United fans at Buckley Park thought - it was United’s overall performance which impressed most.

Given some of their results this season, Thomastown have gained something of a steely finish. This veneer was severely tested by Newpark, but not before they got a real shock.

Although the hosts were determined to go on the attack, it was the visitors who made the tactic work first. It took them just eight minutes to draw first blood, Steven Connolly knocking David Prendergast’s corner into the path of Sean Brennan, who couldn’t miss from close range.

The hosts were quick to hit back, largely thanks to a superbly played ball from Darren Hayes, but Ger Wall’s 11th minute cross was a fraction too far for David Grincell to get on the end of.

That attack was almost Newpark’s undoing as, within seconds, Thomastown went on a counter. Brennan did well to control the long kick-out and spring into the box, but Lukas Banaszkiewicz dashed from his line to close down the striker and get a strong right hand to his shot.

Newpark kept pouring forward at every turn, but found United to be a well-regimented side. C.J. Browne led a strong defence; in front of him Dessie Walsh was the midfield lynchpin, soaking up the Newpark pressure and holding the ball up until there was space to release it into.

Others had a big part to play in United holding on to their one-goal lead, not least Derek Brennan. The defender saved his side when Ben Ryan sent a looping shot over ’keeper Paul Dunne, who left his line to punch Michael Comerford’s 29th minute free-kick away.

For a split-second it looked like Ryan had found the equaliser, but Brennan was on hand to head the ball away from under the crossbar.

Newpark continued to press and press with their high-tempo style, but it was Thomastown who had the better chances. Again Banaszkiewicz came to his side’s rescue, dashing out to stop Connolly’s 42nd minute shot with an outstretched foot. Nathan Sherry also went close when played through on the right by Andy Kavanagh, but he blasted his stoppage time shot over.

The fog remained a constant in the second half; so too did the intensity from both teams. Andy Kavanagh tried his luck first, sending Banaszkiewicz scrambling with a low 53rd minute shot, but he dragged his effort just wide of the netminder’s right post.

It was Newpark’s turn to threaten after that. David Grincell was at the heart of the move, finding himself in a good position after some clever play from Ben Ryan, but he took a coat of paint off the frame of the goal when his 55th minute effort seared the top of the bar.

Such was the nature of the game it was no surprise to see the next opportunity come at the other end. Nathan Sherry had the chance to double his side’s lead when teed up on the right by Steven Connolly, but he couldn’t beat Banaszkiewicz with his low drive – a centred ball to Sean Brennan might have done the trick.

Just when it looked like Thomastown were riding out the Newpark storm, they were caught. The hosts, who had a ‘goal’ chalked off when Grincell netted from an offside position, got back on level terms after their striker sprang the offside trap and was felled in the box.

Henry O’Neill stepped up to take the 69th minute kick. There was plenty of pressure on his shoulders, but he made it look easy with a pile-driver to the bottom left corner.

It might have looked like Thomastown would have to settle for a point, but they weren’t done yet. Those battling qualities which yielded a late winner at home to Evergreen - and even later leveller against Freebooters - came to the fore again when Whelan popped up with his precious winner.

At this stage of the season the race to the league title seems to be in their hands. Can they stay the distance?