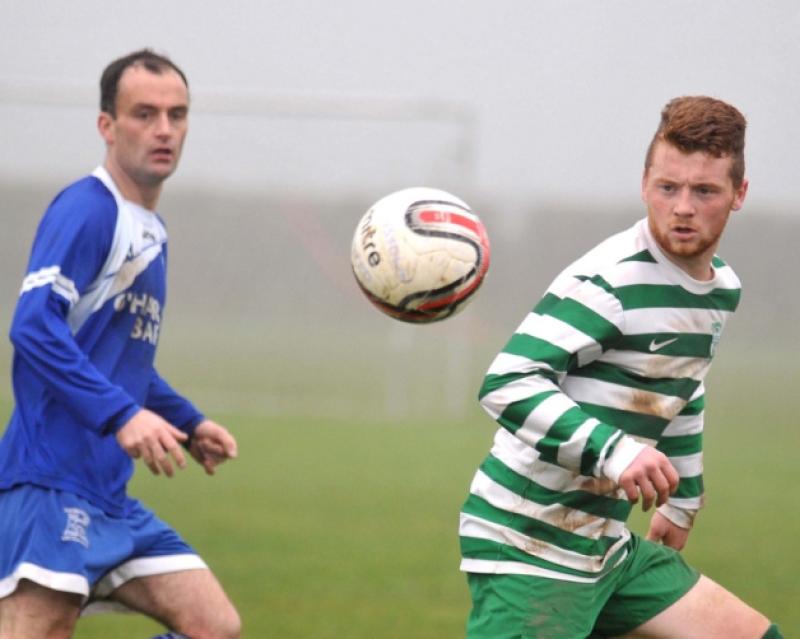 The Premier Division season still has plenty of mileage left in it, but have Thomastown United managed to stall Evergreen A’s drive for a sixth successive crown?

The Premier Division season still has plenty of mileage left in it, but have Thomastown United managed to stall Evergreen A’s drive for a sixth successive crown?

Steven Connolly was the man of the moment as the Blues got the better of the title contenders’ battle at a foggy United Park.

In a tense and tight game where it always looked like one goal could settle it, the striker bagged an 89th minute winner to catapult his side to the top of the table.

While the finish was a cool effort from Connolly, the goal owed much to the hard-working Michael O’Neill. A two-goal hero for the Oscar Traynor team last week, he showed incredible energy reserves to pick up play deep inside his own half and drive forward.

Breaking down the right O’Neill sped towards the box, doing well to win a crunching challenge with Niall Andrews, before looking up and unselfishly slipping the ball left to the waiting Connolly.

The large crowd at United Park held their collective breath as Connolly waited for the delivery. Connolly watched the ball come his way, then coolly picked his spot with a sweet sidefoot shot inside the far post.

On the balance of chances created it was no more than Thomastown deserved, but they wasted a number of opportunities to really put their stamp on the game.

A cautious first quarter, one in which each side sounded out the opposition, gave way to a more entertaining game as the teams began to sniff for goals. Michael O’Neill had a great chance to get his name on the scoresheet when he ghosted through the middle and on to Steven Connolly’s 24th minute flick-on, but he opted for a first time strike that flashed over when he had room to take a touch.

The pace picked up a notch on the half hour, when both sides had chances within seconds of each other. The hosts were first, Danny Monks pouncing on a moment of Evergreen hesitation after they were waiting for a free that never came.

Dashing down the right Monks found a gap to squeeze in a cross for Andy Kavanagh, who unleashed a thundering volley, but Tommy Earls was there to make a vital block.

United went close again from a second corner won off that chance. O’Neill’s inswinger fell in front of C.J. Browne, who tried to meet it with power, but he failed to make the proper connection.

Evergreen quickly turned defence into attack, and had strong claims for a penalty turned down. Latching on to the clearance, Conor English sped down the right and into the box, where he was taken down by United netminder Paul Dunne, but despite Evergreen’s protests no spot-kick was awarded.

Thomastown went on the front-foot after that scare, finishing out the half strongly - but they couldn’t find an opening goal. Browne started a great move with a strong break on the left, one that saw the ball moved across the pitch via Andy Kavanagh, Dessie Walsh and Danny Monks.

Robbie Kavanagh was the recipient on the right flank, whipping in a menacing 42nd minute cross, but it was a fraction too far for the outstretching Nathan Sherry to reach.

Still United pressed on, looking for a way through. Another inch-perfect Kavanagh cross picked out the incoming O’Neill at the back post, but he glanced his header wide of the far upright. In added time Steven Connolly linked up with Sherry, unlocking Evergreen with a neat one-two, but Earls got back to make another timely intervention before the striker could pull the trigger.

The second half started in cagier fashion for Thomastown, who had to sit deep and resist a long spell of Evergreen pressure. Most of the play stayed in the middle third however, as a United defence well-marshalled by C.J. Browne and Derek Brennan kept frustrating the city side.

Not all of Evergreen’s pressure was resisted, as the visitors did have some chances to nick the lead. David Grincell was at the heart of those efforts, getting his head to Conor English’s dipping 73rd minute free, but his glancing header flashed over.

Grincell had United in a panic again soon after. Sprinting on to Damien Kelly’s clever 75th minute ball, Grincell’s diagonal run took him across the path of Paul Dunne, but although he tried to get round the netminder Dunne got something on the ball to make a vital stop.

Although Thomastown hit back with a chance of their own, Steven Connolly rushing an 80th minute shot, the game turned their way when Dylan Whearty was red-carded for a second yellow with seven minutes to play.

The extra man advantage gave the hosts the spur to kick on in the closing stages. They did that, but only after Browne saved their skins when he looked lively to clear Jason Quan’s goal-bound shot.

The hosts began to sense they had a chance to take all three points and moved in that direction when Connolly struck with 60 seconds of normal time left. They couldn’t relax on their heels though, as sub Jamie Owens gave them a late scare when he angled a dangerous shot at the target, but to Thomastown’s relief the ball sailed over - and they went to the top of the table.