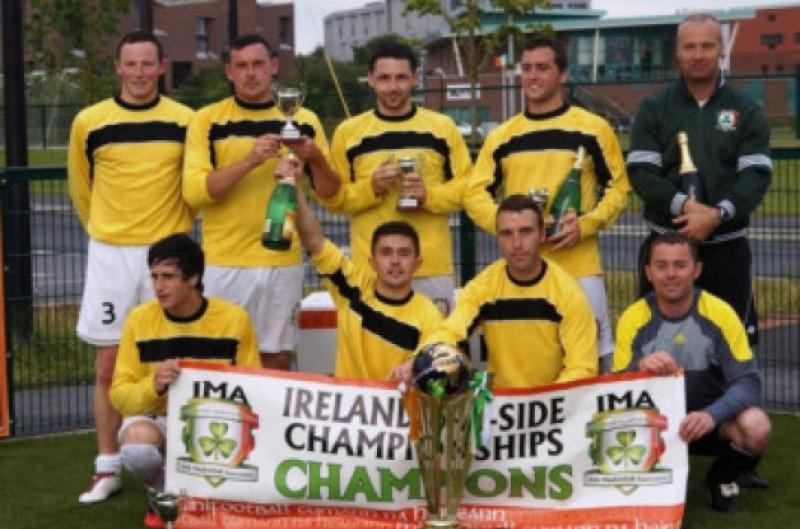 There was more national glory for Kilkenny after a talented group of local soccer players scored an All-Ireland success.

There was more national glory for Kilkenny after a talented group of local soccer players scored an All-Ireland success.

The boys in black and amber travelled to the University of Limerick for the Irish National six-a-side championships, sweeping all before them to take the title.

As well as being crowned champions, some of the players could go even further and represent Ireland at international level.

After battling through their group games, the Kilkenny side showed no mercy as they beat local rivals Waterford 5-1. They continued this form into the next round, seeing off Dublin on the same scoreline.

The high-scoring results proved enough to book a place in the final against Limerick. Showing incredible confidence, the Cats gave a classy display.

After taking an early lead confidence spread through the Kilkenny ranks, helping them shut out the home side and earn a 3-0 win and become the first ever winners of the competition.

The matches, which were played on the all-weather pitches at the University of Limerick, attracted plenty of spectators and guests, including the TD for Limerick City, Jan O’Sullivan, Minister For Housing.

“We have fantastic facilities at the University of Limerick,” she said. “It is a great opportunity for players to showcase their skills.”

In another Kilkenny connection, Irish national six-a-side team manager Lee Kill was an interested spectator at the finals.

Kill, who was named Kilkenny’s top referee in this year’s League honours, was in Limerick to run the rule over players who could earn a call-up to the national side.

Kill has just taken on the role of national manager, and will select a squad to represent Ireland at the MiniEuro tournament, which will be held in Eilat, Israel this November.

Kilkenny, who could yet have some players in that squad, did their chances no harm with a series of impressive performances that drew praise from all sectors.

“Kilkenny deserved to win the event,” said Declan Ford, president of the Irish Minifootball Association. “Their composure in the final was superb and the way they navigated their way through the knockout rounds was quite incredible.”