Callan keep up their Cup charge 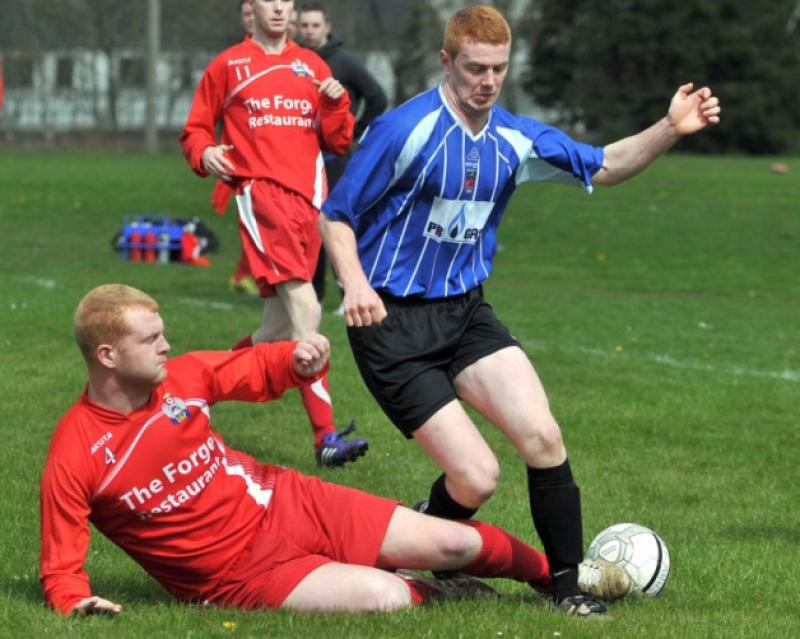 Promotion and the chance to add some silverware. It’s safe to say that Callan United B have had a memorable season, but it’s not over yet.

Promotion and the chance to add some silverware. It’s safe to say that Callan United B have had a memorable season, but it’s not over yet.

United kept themselves in the hunt for some silverware, and earned local bragging rights, when they got the better of cross-border rivals St Ann’s in their Division Three Cup clash.

John Paul Corcoran was at the heart of Callan’s charge, scoring one and setting up the other as they contained the threat of the Tipp Saints on the Fair Green.

Dangerous when standing over a dead ball, Corcoran showed his worth midway through the opening half. Standing over a free-kick on half-way, Corcoran whipped in a menacing ball from the right. His delivery flashed across the box, where Owen McGrath headed it back into the mix.

Goalkeeper Chris Hughes left his line to punch the ball clear, but was powerless to prevent McGrath from getting in a second header which looped into the net.

The goal came at the end of a promising first quarter for the hosts, who dominated proceedings. They served notice of their intent within minutes of kick-off, Michael Cooper getting his head to John Norris’s teasing corner, but his effort crashed off the St Ann’s crossbar.

Cooper was lively in the early stages for the hosts, going close again with a second snap at the target on eight minutes. This time Eoghan Scriven was the provider, firing in a great cross from the right.

Cooper did well to control the delivery, and made space for the shot, but his effort flew over the bar.

United were in top form, their blend of youth and experience combining well to trouble the Saints.

However, for all their efforts they couldn’t find a way past Chris Hughes, whose handling kept St Ann’s in the game. He saved his side with another great catch in the 19th minute, showing strong hands to deal with John Paul Corcoran’s troubling free-kick.

Hughes could do little however to prevent Callan from taking the lead a matter of minutes later. The goal saw United kick into overdrive, as they pressed to make their advantage count for more.

John Norris could have doubled their lead in the 26th minute when, following Mark Laffan’s unselfish set-up, he was left in space on the right of the box. Norris drilled a low shot across Hughes, but the ball flashed outside the far post.

Hughes was called into action again after that, coping well with Owen McGrath’s teasing 29th minute cross and John O’Neill’s 37th minute header, but still his side trailed.

Having relied on their goalkeeper for long enough the St Ann’s attack finally got in motion in the dying stages of the half. Mark Phelan almost found an equaliser two minutes before the break when he whipped in a left-footed free but the ball zipped outside the top right corner, much to Callan’s relief.

The visitors were first to threaten in the second half but, for all their efforts, they couldn’t find that precious equaliser. Ben Callaghan had a great chance to level matters when Martin Phelan squared Tommy Neary’s cross into his path, but he blasted his 65th minute shot wide of the mark.

That gave Callan a real fright, enough to power up their own efforts and build a goal threat. John Norris spread panic when he fired in a 69th minute corner, one which broke for Mark Laffan, but his thundering half-volley sizzled the top of the crossbar.

The game continued to bubble along, but both sides were left to play the last 20 minutes with ten men apiece after McGrath and Tommy Webster were sent off after tangling on the edge of the box.

The dismissals took the sting out of the game. Although Tommy Neary and Richie Tobin led the charge for St Ann’s Callan, with Eoghan Scriven, John Norris and Michael Hartley leading the way, kept a firm grip on the game.

It helped that they managed to finish with a flourish. Mark Laffan helped see to that, pouncing on a stray pass before racing into the box, where he was upended by John Broderick.

John Paul Corcoran came up from defence to take the resulting spot-kick. He made the trip worthwhile, drilling an unstoppable shot beyond Hughes to make sure Callan’s great campaign goes on.