Saints march on as ’Green go out 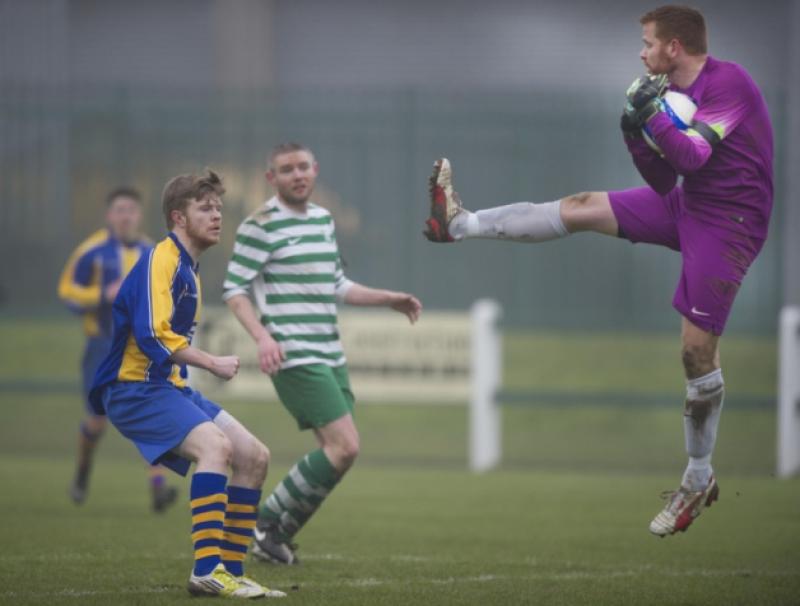 The FAI Junior Cup adventure is over for Evergreen, but the Kilkenny side proved their place in the last 16 was no fluke.

The FAI Junior Cup adventure is over for Evergreen, but the Kilkenny side proved their place in the last 16 was no fluke.

The city side travelled to Tipp Town to take on the reigning champions St Michael’s, pushing them all the way in a game tie at foggy Cooke Park.

In the end, two late goals helped the battle-hardened Saints got the better of their opponents, but they could have made life a lot easier on themselves altogether.

The game was only 30 seconds old when Mark McGrath was presented with a gilt-edged chance. Pouncing on a wayward back-pass the target seemed to open up for McGrath but he could only watch as his left foot shot went straight at visiting ’keeper Packie Holden.

The visitors eventually worked their way into the game. They began to create chances, mainly through Chris Whearty, who was a handful for the home side.

Michael’s, however, continued to enjoy the lion’s share of possession. Despite this, the hosts shunned numerous chances in the first half, with both James Walsh and McGrath spurning chances to give their side the advantage in this battle.

The Saints were almost left to rue their shyness in front of goal when Evergreen pounced on a mistake in the Saints defence.

Netminder Aaron Wall had to move smartly and race from his line to clear an under-hit back-pass, but both teams seemed content to go in with honours even at the break.

The stalemate continued into the second half, with St Michael’s continuing to hold the upper hand in the possession stakes.

After the resumption the game continued with the pattern of the first half. The home side worked quickly to get back on top, but were contained by a resolute Evergreen, who were content to soak up pressure and look for chinks in the homes side’s armour on the break.

This made for a tense game for the home fans, who were almost shocked on the hour mark. You could almost hear a pin being dropped when another mishit back-pass was not dealt with, presenting Chris Whearty with a golden chance on the edge of the box.

For a split-second it seemed that Whearty couldn’t believe his luck. He took a touch or two to get the ball under control, then unleashed a stinging shot that Aaron Wall did well to get his hands to.

The danger wasn’t fully over, as somehow Wall lost his grip on the ball and knocked it backwards. It looked as if the visitors would take the lead with a freak own goal, but Paul Breen had scrambled back to clear the ball off the line.

Stunned back into concentration by this near-miss, the home side upped their efforts and made the breakthrough 20 minutes from time.

Having threatened most through penetrating crosses, David Slattery created the chance when his deep delivery was gathered at the far post by Jimmy Carr. The Irish international beat his man and then Holden with a powerful six-yard shot.

While there was an audible sigh of relief from the home support, Evergreen took that goal as a sign to step up the pace. The visitors were now chasing the game and became ever more anxious as the clock wound down.

Evergreen had a chance to storm back on to level terms when they were awarded a free-kick close to the box five minutes from time. Damian Kelly went for goal, but his shot never troubled Aaron Wall as it sailed over the Michael’s crossbar.

Evergreen remained relentless in their pursuit of a goal. Searching for an equaliser they began to take more chances, a move which left some gaps at the back.

Michael’s held firm in the face of the late pressure, then exploited the extra space up top with a lightning-fast move to seal their place in the quarter-finals.

Lurking close to the Evergreen goal, David Slattery rushed in to pick off an attempted diagonal ball from Holden, who was trying to launch one last attack. It was a chance Slattery took with relish, hitting the net to send the Saints into the last eight. It was a cruel ending for Evergreen, but they’ll have a quick turnaround as they face St Kevin’s Boys in the Leinster Junior Cup this weekend.