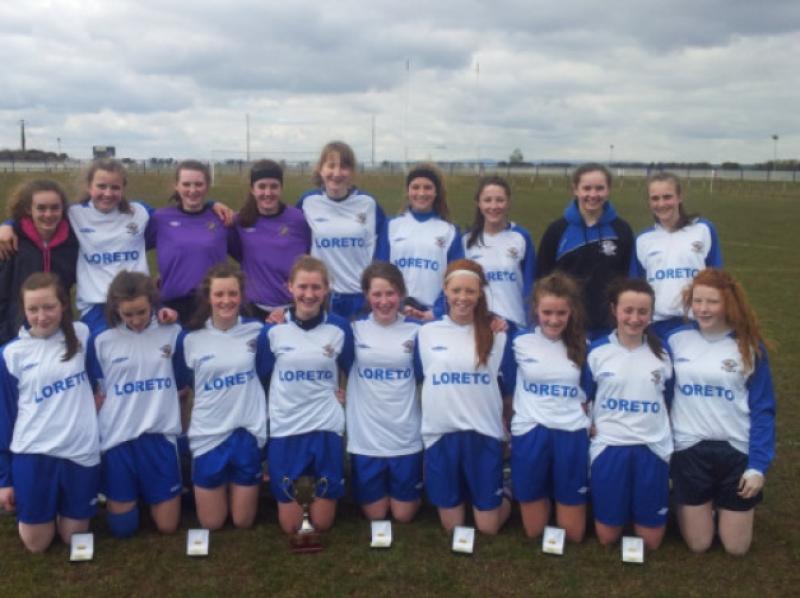 CAN a venue really be unlucky for a team? The Loreto wouldn’t be out of place to think that. The Kilkenny girls were left cursing their misfortune after their title hopes went up in smoke.

Twelve months ago, the Kilkenny school was edged out of the Minor Cup final by Blackwater CS at Waterford’s RSC. Little over a year later, the football hoodoo that the venue holds over them struck again as Presentation Thurles sent the Cats packing, this time at the semi-final stage.

Thurles began with a strong wind at their backs and used the elements to keep the Loreto pegged deep in their own half. The pressure paid off, as a stretched Kilkenny defence conceded a free on the left wing, close to the box.

Standing over the free, Sarah McKevitt saw her chance and took it. McKevitt let fly with a left-footed kick, pinging a diagonal ball over the Loreto defenders and into the top right corner of the net.

That was a blow for the Kilkenny girls, who were looking to build on their Leinster title success over Portlaoise’s Colaiste Chriost Ri (the Loreto won 2-1 thanks to goals from Niamh Deeley and Olivia Nolan).

They almost made the perfect start before conceding that strike, as Tara Clifford carved the Pres open with a clever ball out of defence after just two minutes. Niamh Deeley was on it in a flash, but her shot was straight at netminder Christine Coffey.

The early goal gave Thurles the confidence to attack, which they did in droves. Shonagh Cleary was the catalyst for several moves, including a 10th minute break which saw her outmuscle a defender and win the ball in the corner. Play was worked to Hazel McAuliffe, but her shot was hacked to safety to Aine Fennelly.

Just when it looked like the Kilkenny girls would keep the deficit at just one goal until the second half, when they would have the elements, disaster struck. Breaking down the right, Cleary delivered a 30th minute cross which bounced between the last defender and goalkeeper, giving striker Mary Burke enough time to stick a leg out and divert the ball home.

That goal left the Loreto reeling. Try as they might, they couldn’t bridge that two-goal gap. The Pres remained on the offensive, going close with a Cara O’Connor shot that flashed wide on 32 minutes, while Sarah McKevitt brought the best out of netminder Laura Tynan with a dangerous 33rd minute free-kick.

The Loreto refused to give in, however, playing their hearts out for the full hour. They had a great chance to pull a goal back – and, who knows, it could have led to a revival – when Niamh Deeley left Niamh O’Mahony trailing in her wake in a 39th minute footrace for possession. Driving through the middle, Deeley unleashed a low raking shot, but Christine Coffey made a good save with her feet.