Thomastown maintain pace in their charge for Premier title 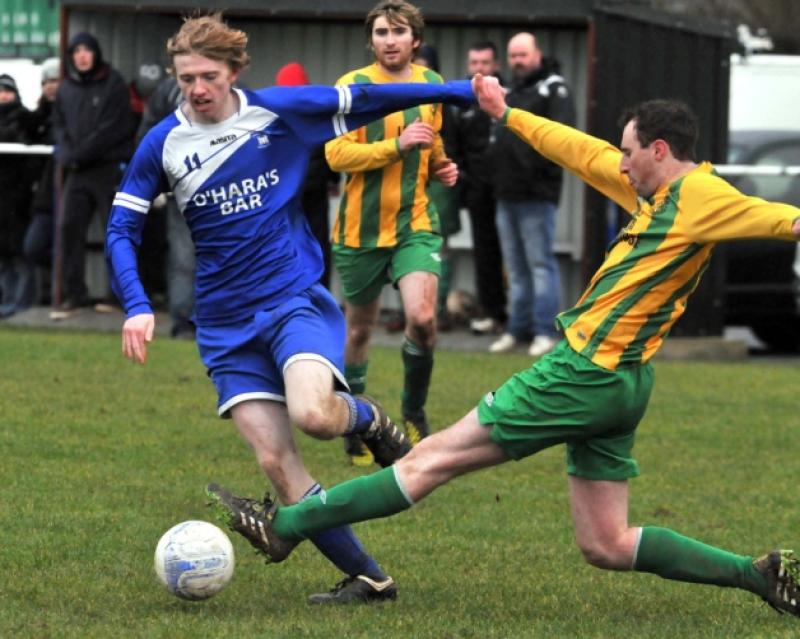 A fast start proved decisive as Thomastown United A kept up their relentless pace in the race for the Premier Division title.

A fast start proved decisive as Thomastown United A kept up their relentless pace in the race for the Premier Division title.

Just like in last week’s game, Steven Connolly was the man of the moment for Thomastown, striking what proved to be the only goal of the game.

Unlike last week, he didn’t wait 43 minutes to hit the net.

It took Connolly and Thomastown the small matter of four minutes to push their way in front. Collected by the breeze, Robert Skehan’s lofted ball from midfield took a troublesome bounce for the East End defence.

Connolly was on to it in a flash, muscling past Nicky Cleere and taking a hefty challenge from outrushing goalkeeper Patrick O’Neill before rolling the ball home.

Just as it was a dream start for Thomastown, it was a nightmare beginning for East End.

Just eight kilometres separate the two clubs, but there is a much bigger gap in terms of their top flight status. While Thomastown are chasing for the title (they are four points behind leaders Freebooters A with a game in hand), East End are locked in a three-way relegation battle with Fort Rangers and Lions A.

East End may not have won a game since November – in fact they’ve taken just one more point since that 4-3 win over the Lions on November 3 – but their confidence was far from flagging.

Dusting themselves off, they regrouped and took the game to their rivals.

Kevin Brennan showed great pace to pick up Ross Dowling’s pass and run at the goal. His speed took him past Derek Brennan, but Davy Wemyss slid in to get the ball away before the winger could pull the trigger.

The Bennettsbridge side pushed on again, with Lannon the architect of their next chance. Taking the ball from his own half he teed up Ross Dowling for the shot, but netminder Rory Leadbetter was equal to the strike.

East End kept the heat on United, forcing some more last-gasp defending soon after. Kevin Brennan was proving to be a handful and gave cause for concern when he picked up Eddie Fitzgerald’s long ball and unleashed a stinging shot, but Derek Brennan was there to make a timely block.

United had been under the cosh for long spells, but lifted the siege long enough to create some havoc of their own with 43 minutes on the clock.

Winning possession after an East End attack broke down William Flood broke down the right and chipped in a ball for Connolly to chase.

Played onside, the Thomastown striker did the hard part by beating Patrick O’Neill with a lob, but he couldn’t keep his shot on target.

United had the attacking impetus now and finished the half on a high. They could have doubled their lead 60 seconds later, when Kelvyn Skehan turned for goal and beat Patrick O’Neill with a venomous shot, but the ball cannoned off the left post.

Thomastown kept their purple patch going when, in the dying seconds, they went close again.

Moving the ball at pace, Robert Skehan, young full-back Danny Monks and Flood combined with a cutting move that split East End open. Mark Delahunty slid in to try and get on the end of Flood’s cross, but netminder Patrick O’Neill got there first to make a brave stop.

Thomastown maintained their momentum in the second half, driving forward in the early stages, but they couldn’t get the better of Patrick O’Neill. The ’keeper was kept busy, but did well to make good stops from testing shots by Mark Delahunty and William Flood.

It took East End a little longer to force their way back into the game, but when they did it was with menace.

Awarded a free after a foul on full-back Miceal Shiels, Brian Lannon gave United a scare when he drilled his shot past the wall. Rory Leadbetter saw the 57th minute effort late, but did well to smother the ball at the second attempt.

The drama was far from over, as East End won the resulting kick-out. Ross Dowling worked the ball back in to Michael O’Neill, who sped past the defence and left Leadbetter rooted to the spot with a crisp low shot, but the ball struck the post and rebounded int the grateful ’keeper’s arms.

The sides continued to press for goal-scoring chances, but they proved to be few and far between in the final quarter.

The final stages saw Thomastown maintain their lead, but they could have made life easier on themselves. Steven Connolly had a great chance to double his tally when, after some great work by Monks and sub Murty Broaders, he got on the end of Flood’s low 75th minute cross, but he could only sidefoot wide when he seemed certain to score.

East End kept plugging away, hitting back with one more chance to draw level soon after. Michael O’Neill showed great spirit to win a long kick-out, heading the ball down into Lannon’s path. He let fly from distance, but again Leadbetter wouldn’t be beaten.