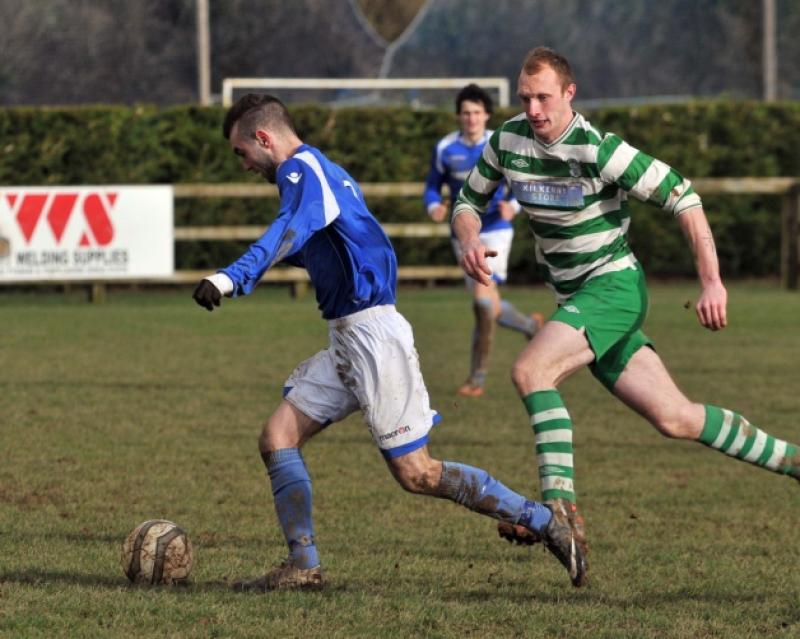 Evergreen A kept their sights trained firmly on the Maher Shield, but they had to battle two storms to safely get into the final four.

Evergreen A kept their sights trained firmly on the Maher Shield, but they had to battle two storms to safely get into the final four.

The ’Greens had to withstand some firm pressure from their city rivals Freebooters A to get into the semi-finals of the competition. On top of that, they also had to weather the weather!

In the end they did both on the Kells Road on Sunday, but it took a sparkling spell from two-goal hero Brian Jordan to help them through.

The match was everything the city derby promised it would be - two teams going at 90 miles an hour and giving their all in a bid to get one over their old rival.

The siege was lifted in the second half, but only after a thunderous hail storm forced the players off the field.

Sensing a chance to force the game their way, Evergreen picked up the pace when referee Nicky Marnell brought the teams back on. Within a matter of seconds they had the ball in the Freebooters net, Sean Barcoe and Jamie Owens teaming up to send Brian Jordan.

The striker skipped into the left side of the box, drawing goalkeeper Michael Lambert from his line before drilling a low shot inside the far post.

The goal brought a sense of relief for Evergreen, who had been under the cosh for most of the opening half. Backed by a very strong breeze it was no surprise to see Freebooters use the long ball as they tried to the peg their opponents deep in their own half.

The first time they got a hand from the elements, it almost paid off. Lambert’s booming 10th minute kick was caught by a gust of wind and billowed towards the goal. The ball bounced in front of Damien Raggett, but despite his best efforts he was inches away from connecting with it.

Play wasn’t all one-way though, as Evergreen played some neat ball along the ground to force their own way forward.

Robbie Quan sparked panic in the Freebooters ranks when, after 16 minutes, his clever ball held up in the wind and fell just right for Brian Jordan. Springing the offside trap, Jordan stole into the box and unleashed a stinging shot, but Lambert stayed big long enough to make a fine stop.

The hosts were at it again just 60 seconds later. Dashing down the wing, Chris Whearty created enough space to whip in a low cross. Jordan stepped over the ball, letting it run through for David Grincell to strike, but defender Jamie Lynch made a timely block.

The Blues had enough of those scares, pouring forward with an attack of their own. Young full-back Jamie Lynch got them going, driving at Evergreen with a forceful run which took him deep into enemy territory before he slipped the ball on to Nathan West. Showing keen awareness, West did well to pick out Jason Hennessy on the left. The winger did well to lift the ball beyond the out-rushing Pierce Dargan, but his shot hit the far post and bounced back out.

Evergreen went back on the offensive after that, continuing their search for the opener. Chris Whearty had a great chance to deliver just that when he raced on to Brian Jordan’s 39th minute cross but he shot first time, blasting the ball wide when he had room to take a touch.

The elements construed to deliver what could have been an eye-opening goal a minute later. Driving the ball downfield, Michael Lambert’s kick-out was caught by a gust of wind and bounced over the head of Evergreen netminder Dargan. For a second everyone froze, as the ball seemed destined for the back of the net, but Dargan scrambled back and pounced on the ball before it could cross the line.

Having weathered the storm for the opening 45 minutes, Evergreen almost snuck in front on the cusp of half-time. Pushing forward one last time, Jordan showed great strength to win an aerial battle and head the ball down into Sean Barcoe’s path. Barcoe had time to look at the target and pick his spot, but his shot went straight into Lambert’s chest.

The sides continued to play at pace in the second half, but with most of the action going through a crowded middle third there was little in the way of clearcut chances.

The enforced weather stoppage did more than halt the flow of the game; it seemed to check Freebooters’ stride. Once they got back on the field Evergreen wasted little time in taking the lead, Jordan netting that opener within about 60 seconds.

With the shackles now thrown off them Evergreen stepped up their efforts and tried hard to make the game safe. Chris Whearty had a great chance to blast in a second goal in three minutes when he let fly with a dipping, swerving shot from the right, but Lambert did well to fist the tricky effort clear.

Four minutes after giving his side the lead, Jordan doubled his and Evergreen’s tally.

There was an element of luck and carelessness in the goal - the luck came as Sean Barcoe fell while controlling a dropping ball, which then spilled into Brian Jordan’s path. The carelessness came from the Freebooters defence, who stood still as Jordan took a touch and slammed the ball into the roof of Lambert’s net from inside the box.

The goal was a hammer blow for the Blues, who tried hard to get back into the game but found little reward for their efforts. They had a strong shout for a spot kick when Ger Hayes was bundled over in the box as he tried to get on the end of a Cathal O’Neill free, but their 67th minute penalty claims were waved away.

As the half wore on Evergreen began to open up the midfield, getting on top and going the closest to adding to the scoreline. David Grincell had a glimpse of goal when he skilfully took down a high ball and launched it at the target, but Lambert got down smartly to tip the ball out for a corner.

They went even closer to wrapping up the game, and with it a place in the semi-finals, when Whearty sent the overlapping Tommy Earls free with a quick ball down the right flank. Seizing possession Earls delivered a peach of a cross, which zipped across the face of goal and straight to the incoming Ben Hickey. The Evergreen sub slid in to connect with the cross, but Lambert was there to make a brave stop.

Freebooters refused to throw in the towel, getting some reward as the game ticked into added time. Damien Raggett was in the right place to stab the ball home after Ger Hayes glanced on a Cathal O’Neill free, but last year’s beaten finalists couldn’t stop Evergreen from booking their place in the Shield’s final four.