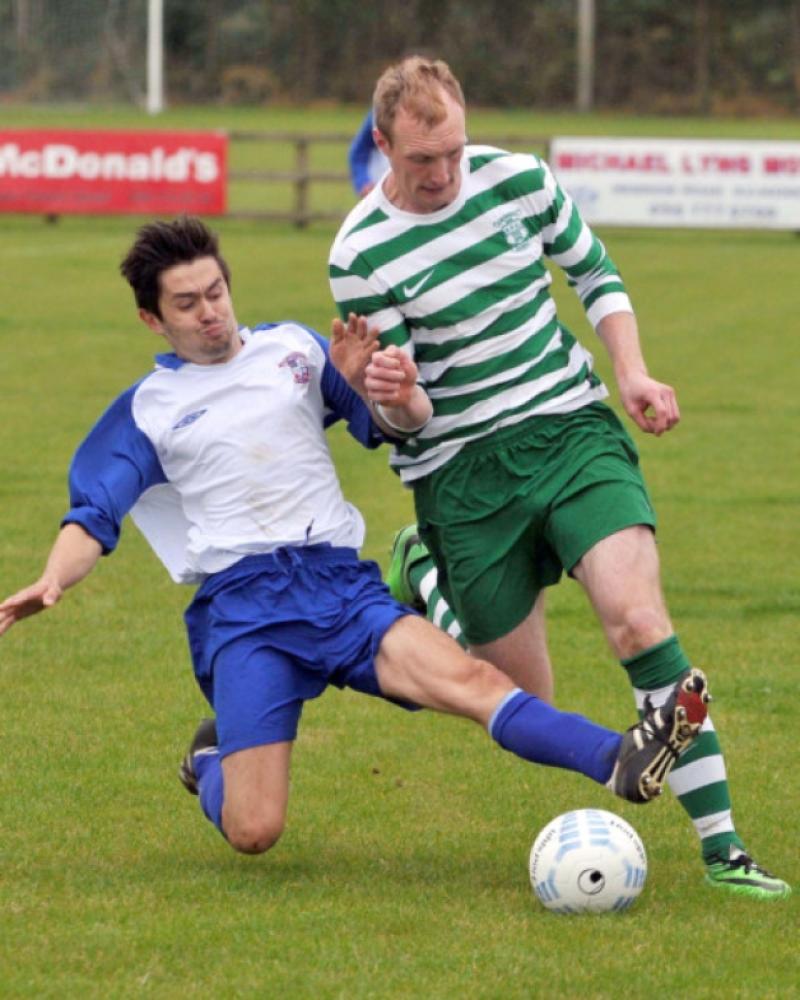 A game that started with a bang ended with a whimper, but Freebooters held their nerve to keep their biggest rivals at bay.

A game that started with a bang ended with a whimper, but Freebooters held their nerve to keep their biggest rivals at bay.

The opening weekend of this year’s Premier Division saw reigning champions Evergreen welcome Freebooters for what promised to be a cracker of a game.

After a hectic opening half, the intensity levels on the field seemed to drop as both sides struggled to find space. Evergreen chopped and changed but ’Booters stayed the same as they held their shape to see out a game they never looked like losing.

The Kells Road played host to this opening day encounter, and an icy wind circled the grounds throughout the morning.

Freebooters piled on the pressure from the first few minutes, giving the home side some indication of what was to come. With a few half chances at the start, they didn’t have to wait long for their reward.

A foul on Paul O’Brien handed the opportunity to Paddy Cahill to swing a dipping delivery into the box. The arcing ball confused the Evergreen defence as they struggled to clear the danger.

The ball was knocked around the six yard box before Geoffrey Brennan directed a shot at the bottom corner. ’Keeper Patrick Holden was left flat footed as the ball took a deflection on its way to the net.

That was just seven minutes into the game, and already Evergreen had folded under the early pressure. They tried to regain their composure after the restart, but didn’t seem to be able to link up as they so often do.

Aaron Molloy had been deployed in the space behind striker Damien Ragget, playing the role perfectly.

Set up as an attacker he also prevented Evergreen’s deep lying midfielder Damien Kelly from getting too much time on the ball, thwarting his attempts at setting up any Evergreen attacks.

Ben Hickey was Evergreen’s brightest spark. His relentless energy and tricky had the ’Booters defence in trouble at times.

Skipping past two players, Hickey attempted a shot from the edge of the box. While his effort was saved, ’Booters knew they had a thorn in their side to deal with.

In a tough battle Sean Barcoe went close but saw his thumping header fly over the crossbar midway through the first half. It looked as if it wasn’t going to be Evergreen’s day.

Both teams struggled to get on top, with both sets of midfielders cancelling each other out. Freebooters had dominated at the heart of the defence, and it was again up to the fleet-footed Hickey to create something.

The winger drifted in from the right hand side and received possession on the edge of the box. Playing the ball between the legs of his marker, he skipped past a second challenge before cracking the ball off the post.

At the break the score was 1-0 to Freebooters. A few momentary lapses aside, the Blues had been the stronger team in the opening half.

The second half started much differently, as both teams seemed short of ideas. Eight minutes in and Hickey found himself being replaced by the similarly-styled Conor English.

The two sides struggled to keep the ball on the floor, with neither looking like grabbing a goal. Evergreen’s Vinny O’Brien came off worse in a tough challenge, the full-back having to be replaced by Robert Skehan. He slotted into midfield, Robbie Quan filling in at right full back.

Tommy Earls had the first chance of note in the 65th minute. Gradually making his way up the pitch the Evergreen defender attempted an effort from distance, forcing ’Booters ’keeper Michael Lambert into a fine save.

Sean Barcoe and Robbie Quan saw efforts go amiss in the final ten minutes, but Freebooters seemed content to sit back and work the ball slowly around the pitch.

Any time Evergreen pressed their opponents they simply soaked up the pressure before hitting them on the counter attack.

Aaron Molloy very nearly exposed the chink in the Evergreen armour when he raced up the left hand side of the pitch. When a lack of cover forced ’keeper Patrick Holden to commit Molloy skipped around him. The angle proved to tight however and the number nine saw his shot fly across the face of goal.