Tops of ’Town with junior title 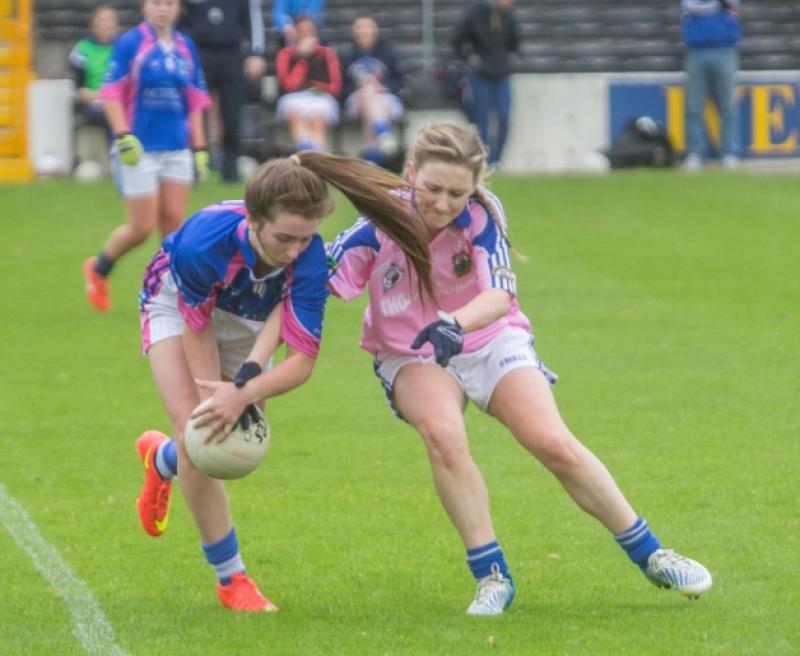 Ladies Gaelic football may be a growing game in Kilkenny, but the 2014 county junior final at Nowlan Park was a terrific advertisement for the sport.

Ladies Gaelic football may be a growing game in Kilkenny, but the 2014 county junior final at Nowlan Park was a terrific advertisement for the sport.

Thomastown, backboned by many of last year’s Three Friars team that won the Tipperary junior championship, beat Erin’s Own (Castlecomer), who had plenty of experience in former Railyard players.

First blood went to Thomastown when Joanne O’Hanrahan picked off a nice point. Shortly afterwards the exciting Katie Nolan levelled. Thomastown dominated but as has been the case in most games, the midfield and half forwards were slow to deliver the ball. Both teams were guilty of poor shooting before the game sprung to life in the 15th minute when ’Comer’s Maeve Walsh was fouled for a penalty. Tamara Agar blasted to the net.

Thomastown centre-back, Jessie Carroll, a successful product of the under-age structures, went on a 70 metre solo run. Just when it looked like she might lay off the ball she finished to the net with a superb strike. A minute later Katie Nolan pointed as Erin’s Own steadied up.

Mayo girl, Ann Prendergast equalised for Thomastown on 22 minutes. Jessie Carroll then made a superb block on Ailish O’Neill who had the goal at her mercy. Seconds later Mairéad Daly restored the ’Comer lead with a point.

In the 28th minute the game turned again. Sub Becky Walsh unleashed a screamer of shot to the back of the net to give Thomastown the lead, 2-2 to 1-3.

Ann Prendergast tapped over a point before Alice Farrell pulled one back to leave Thomastown 2-3 to 1-4 ahead at the break.

Both teams struggled for control in midfield after the turn and the forwards were starved of good possession. Nine minutes passed before there was a score from Alice Farrell, a point. Later Thomastown sub, Caoimhe Cullen pointed.

On 23 minutes there was another significant moment. An Erin’s Own player was sin binned for a jersey tug. Joanne O’Hanrahan pointed the free. Although a player down, ’Comer reacted well and Aoife Dunne pulled back a point (2-5 to 1-6).

It was the last score, but it wasn’t the end of the drama. Erin’s Own chased to the end. When Jenny Reddy led a break, it ended with an unfortunate collision. The game was delayed for several minutes as a Castlecomer player received attention. Nine minutes of injury time were played. It wasn’t enough for ’Comer.

Erin’s Own can be proud. With experienced players like Grainne Daly, Alice Farrell, Aoife Dunne joined by the exciting Katie Nolan and a well structure juvenile club, they are sure to be around for a long time.

Thomastown’s Jessie Carroll was judged the player of the match. Her reaction to the Erin’s Own goal and her drive and leadership in defence encouraged all around her. Aine Sheehy, Claire Kelly, Sheila Sheehy, Ann Prendergast and Jennifer Norris as well as the injured Sinead Whelan, along with young players like Becky Walsh, will ensure the adult game will thrive in Thomastown. County Chairman, Joe Fox presented the winners trophy to captain, Aine Sheehy.