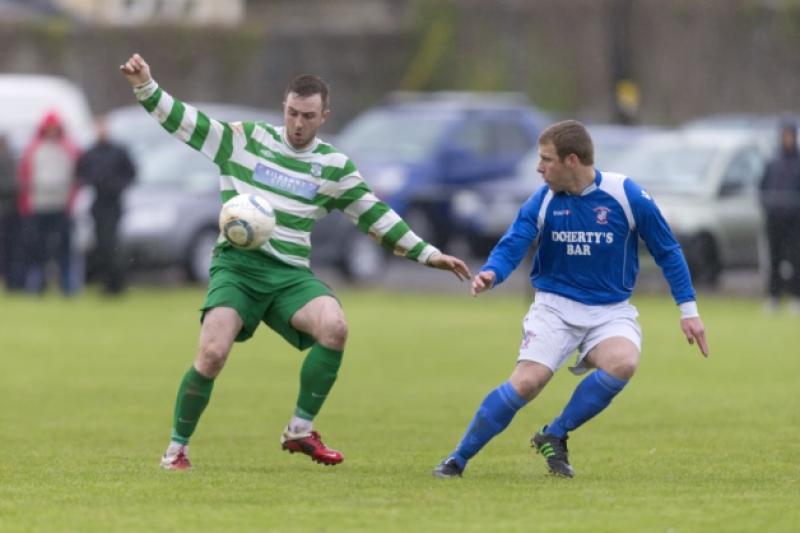 Evergreen sent out a loud warning of their FAI Junior Cup intentions as they put Spa United the sword on Sunday.

Evergreen sent out a loud warning of their FAI Junior Cup intentions as they put Spa United the sword on Sunday.

The city side showed their local rivals no mercy as they racked up a double-figure win in Johnstown and sailed into the next round.

A big part for their success was the performance from David Grincell. The striker had a morning to remember, helping himself to SIX goals on a day where almost everything he struck went in.

The visitors went on the hunt from the off, but found Chris Leahy tough to beat. The Spa netminder kept his side on level terms in the early stages, looking lively as he stopped great shots from Conor English and Grincell early on.

And, when Evergreen did beat the ’keeper, they found the goal-frame to be a stubborn opponent.

Oisin Corr thought he had given his side the lead when he flicked a near-post header past Leahy, but his 12th minute effort crashed off the underside of the bar and bounced out.

The growing pressure finally told in the 19th minute, when Evergreen took the lead. In an excellent move, sparked by Robbie Quan’s drive down the left, Conor English unlocked the Spa defence with a reverse pass for Grincell to run on to and cleverly dink the ball over the advancing Leahy.

Evergreen didn’t waste time looking for a way to double their lead. They did just that on the half hour, Grincell taking a quick free-kick that sent English flying down the left.

The winger knocked the ball back into the centre, a deflection sending it spinning perfectly into the path of Grincell, who calmly sidefooted it home.

Spa had been stunned by that second goal, but raised their game as they went looking for a way back into the tie. Jason Moore went closest when James Whelan flicked Mark Webster’s 33rd minute free into his path, but Packie Holden was well-placed to make the save.

That chance proved to be the last of the opening half - but the second more than made up for that.

Goal of the game

It didn’t take long for Evergreen to stretch their lead once the game resumed. They needed just four second half minutes to make it 3-0, doing so with the goal of the game.

It looked like Sean Barcoe had over-run an intended pass from Chris Whearty, but the midfielder kept control with a clever back-heel flick that took the ball over the head of the oncoming defender. Barcoe still had work to do but, looking up, saw Leahy had left his line. With the goalkeeper stranded in no-man’s-land, Barcoe applied a cool finish, chipping the ball into the net.

Rather than settle for the 3-0 scoreline, Evergreen pressed for more. Barcoe had a strong penalty claim waved away in the 56th minute while, 60 seconds later, Grincell was denied his hat-trick by a fine Leahy save.

However, the early goal trickle became a flood as the game ticked into the last half hour. Staying on the front foot, Grincell completed his hat-trick on the hour when he ghosted in at the back post to knock in a teasing English cross.

Three minutes later, Evergreen had another goal to celebrate, Ciaran Snype beating the offside trap as he took down Robbie Quan’s long ball and slipped it home. Sixty seconds later Grincell added another, using his head to nod Damien Kelly’s raking cross home at the back post.

Spa could have thrown in the towel at that stage, but in typical Johnstown fashion they refused to buckle.

Jason Moore went close to pulling a goal back when he got on the end of Gavin McCarthy’s cross, but his 69th minute header flashed just wide of the far post. Mark Webster went close soon after, teaming up well with James Whelan for a one-two, but Packie Holden comfortably held his shot.

There was still time for another goal burst, even with the game moving into the last 15 minutes.

Jamie Owens added his name to the ever-growing scoresheet after Grincell was barged in the back on the edge of the box. Stepping up to the 76th minute free, Owens made no mistake with a sweetly-struck shot that curled into the left side of the net.

Two minutes later, Barcoe bagged his second and Evergreen’s eighth goal. Awarded a penalty after Jason Moore was adjudged to have handled in the box - Spa were hit with a double whammy when Moore was dismissed for the offence - Barcoe made no mistake when he hammered the ball inside the left post.

The final say in the game went to Grincell. He added his fifth goal when he latched on to a Barcoe pass and coolly slotted it home, then completed the double hat-trick in injury-time, sliding in at the back post to turn sub Mark Connick’s dangerous cross into an incredible tenth goal.