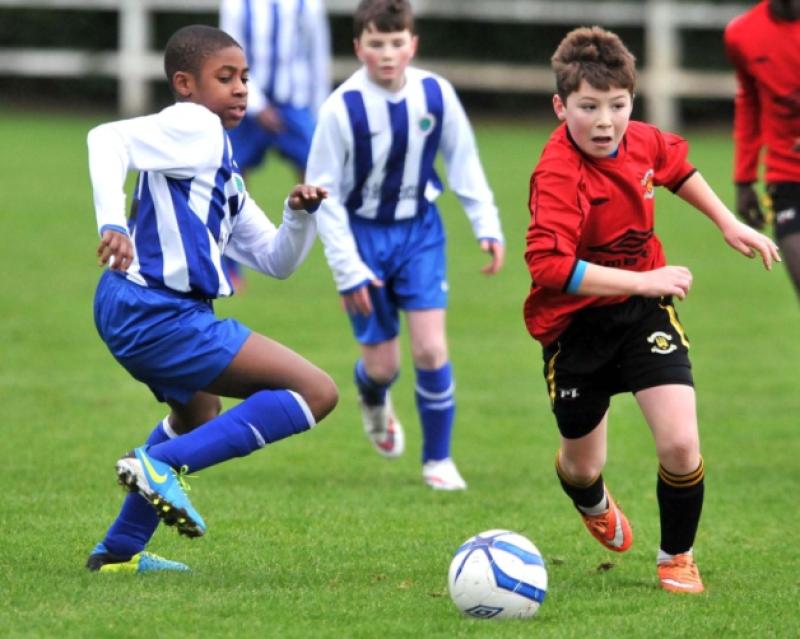 It seems that it doesn’t matter what age the players are - when it comes to the crunch, every Kilkenny team has razor-sharp claws!

It seems that it doesn’t matter what age the players are - when it comes to the crunch, every Kilkenny team has razor-sharp claws!

The Kilkenny & District League’s under-13 squad proved as much when they rose as one to cut the NEC to shreds in an inter-league blockbuster in Castlecomer.

The hosts were deadly when they turned up the heat on a chilly Sunday, coming from behind to earn their second successive win in the Euro Tab Cup.

Things looked grim for the Cats when the NEC came from one down to take a first half lead, but three goals in a blistering six-minute spell around the interval turned things Kilkenny’s way once more.

The hosts made sure they went in all square at the break when Ronan Lavelle ghosted in on the blind side of his marker and turned in Ben Cantwell’s injury-time right wing cross.

The NEC were frustrated with losing their lead, but had little time to set things right - the new half was only seconds old when they found themselves chasing the game again.

Once more Kilkenny used their pace and the wings to devastating effect. Lavelle was the architect once more, dashing down the left and whipping in a low teasing cross from which Mikey Clifford couldn’t miss.

The points were all but secure by the 36th minute. Hungry for more goals, Kilkenny went chasing every ball. Mathew Zych was rewarded when he rushed in to dispossess a defender from a short kick-out and then sped past ’keeper Ryan Connell before finishing to the empty net.

Kilkenny were just as quick off the mark in the first half, wasting little time to stamp their authority on the game. It took Mikey Clifford just six minutes to hit the net - and how! - as his stunning half-volley rocketed into the net.

The NEC were stunned by that goal, but quickly regained their composure. Adam Donohoe sounded a warning when he clipped the top of the bar with a 14th minute strike, but better was to follow 60 seconds later as Paddy Moore forced the ball home from the edge of the six-yard box.

Worse was to follow for Kilkenny, as the visitors went in front with 22 minutes on the clock. Moore grabbed his second of the game when he seized on a short back-pass and sprinted towards the posts, not stopping until he had tucked the ball home.

However, the NEC charge was halted when Kilkenny hit top gear with that excellent three-goal haul.

Although they were 4-2 up with little over a quarter of the game left to play, Kilkenny weren’t finished.

Hungry for more goals, the hosts showed that they goal threats beyond their starting 11.

Sprang from the bench, Jamie Maher made his own headlines when he bagged a hat-trick inside five minutes.

He added his second three minutes later. Defender Conor Power started the move, stepping into midfield to cut out a long NEC kick-out before teeing up Ben Cantwell, who slipped Maher through for the finish.

He completed his memorable treble in the 54th minute after he was fouled in the box. With all his team-mates urging him to complete the hat-trick the pressure was on Maher - but his ice-cool finish capped a fine afternoon for the Cats.