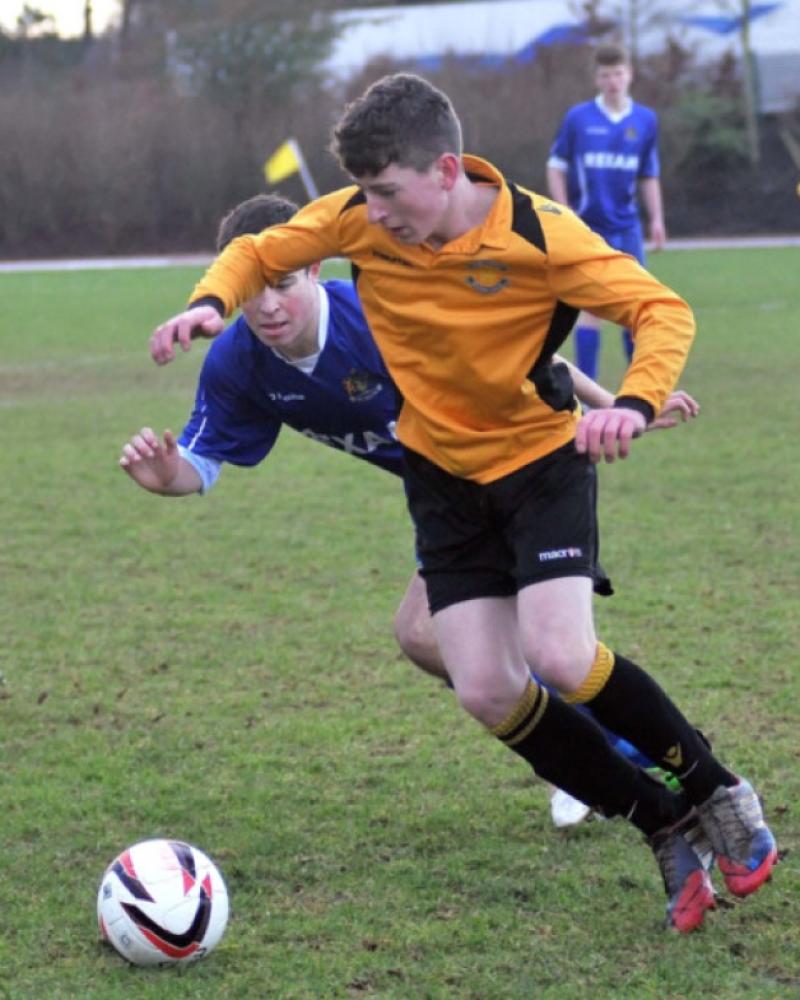 A spirited performance from John Maclean’s young Cats was not enough to prevent Waterford from claiming the inter-league honours.

A spirited performance from John Maclean’s young Cats was not enough to prevent Waterford from claiming the inter-league honours.

The talented visitors got the jump on their hosts in Scanlon Park on Saturday, hauling back their local rivals in the last group game of the youth competition.

Despite Cian Loy putting the home side in front after just two minutes it was Waterford who came out on top in this thriller, scoring their deserved winner 13 minutes into the second half.

The winner arrived after a deep corner was headed back across goal by Alan Fitzsimons. The ball fell to Eoin Power, who smashed it home from the edge of the box.

The game, played in a fantastic spirit with plenty of hard and fair tackling from both sides, got off to the perfect start for Kilkenny when the impressive Loy struck before most spectators had even found their viewing spot.

As both teams found their rhythm it was Waterford who looked most likely to score next, with Dylan Griffin looking lively on the right and causing problems for the Kilkenny defence throughout. Only for Chris Keane and Dylan Kavanagh playing well at the heart of the Kilkenny defence, it could have been a much different opening 15 minutes.

Waterford’s first clear chance came on 20 minutes, after a quick throw from ’keeper Matthew Sheehan sent Griffin away down the right. He found Fitzsimons in space, but while he struck his shot well a great save by captain Aidan Hynes ensured the Cats stayed in front.

Minutes later, it was Hynes’s opposite number who was called into action. Mark O’Neill won possession well in midfield and played it through to Alex Conway. He knocked the ball into the path of Loy, but his shot was well saved by Sheehan.

By this stage the game was being played at a frantic pace. Waterford continued to pose a threat down the right, Griffin putting a good ball into the box, but Hynes pulled off a fantastic save to tip it past the post.

As the half wore on Kilkenny struggled to retain possession in midfield. Seven minutes from the break, Waterford got their reward.

Luke Doherty broke into the box on the left hand side and was brought down following a number of challenges. The awarding of the penalty may have been soft but Hayden Galibert made no mistake, calmly slotting the ball to the ’keeper’s right to send the teams in level at the break.

Waterford continued to dominate after half-time, taking just five minutes before storming into the lead. A long kick out by the ’keeper was flicked on for Alan Fitzsimons to latch onto. He deftly lobbed it over the onrushing Hynes for a lovely finish.

That setback was the wake-up call Kilkenny needed. By the 53rd minute they were back level. Awarded a free-kick for a foul on Peter Henebry some 30 yards out, Ryan Bergin stepped up and sent a peach of a strike over the wall, past the hapless keeper, and into the top corner.

Kilkenny weren’t able to capitalise on this, however. Within five minutes, Waterford scored what proved to be the winner.

The Cats fought hard for the last half hour, but despite their efforts the search for an equaliser proved fruitless.

The best chances of the latter stages fell to the Déise men. Substitute Sean Whelan was a menace on the left and but for some stellar defending from Chris Keane could have added a fourth for the visitors.

Although Kilkenny sub Dylan Jordan brought a fine save out of the Waterford stopper late on, the Munster men held on for the South-East derby honours and a place in the national knockout stages.

Kilkenny can still join Waterford there, but their hopes rest on the result of the North Tipp v Wexford game. If Wexford win by five clear goals, they will also qualify from Group Three - and the Cats will be out.