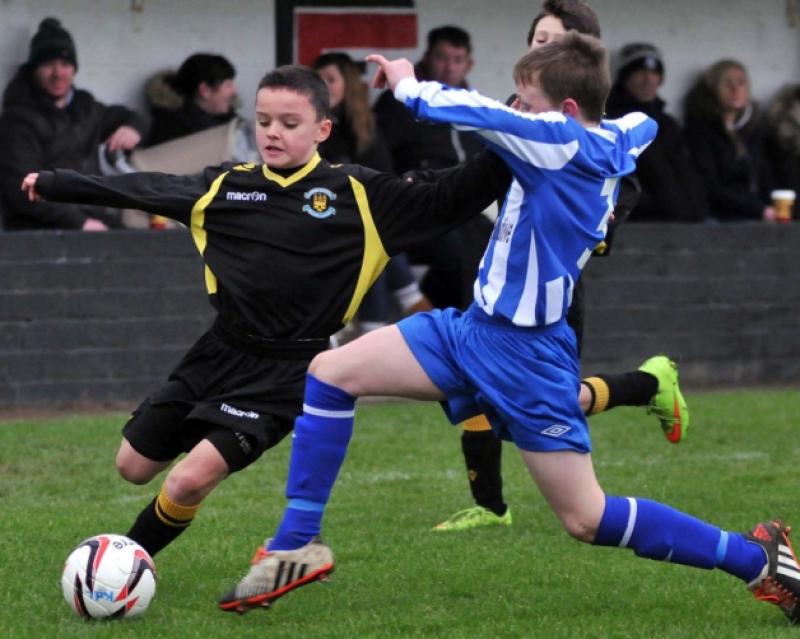 A lightning-fast start, combined with an equally steely finish, saw the one of the Kilkenny & District League’s youngest teams give a performance beyond their years.

A lightning-fast start, combined with an equally steely finish, saw the one of the Kilkenny & District League’s youngest teams give a performance beyond their years.

Fresh from a 6-2 win over Carlow, the League’s under-12s made it two wins from two in the Jim Cashin Cup. This time it was the North East Counties who felt their force, as the Kittens came out on top in Castlecomer.

Right from the off Kilkenny showed their attacking skills, pushing the NEC into defensive mode.

However, they also showed they were keen students of the game - catching on that their rivals liked to work the ball out from the back, Kilkenny stepped up and fenced the NEC in.

That instinctive play almost led to a quick opening goal. Kyle Healy pounced on the ball from a quick kick-out and raced into the box inside two minutes, but NEC netminder Antonio Ignet left his line to make a vital stop.

The goalkeeper was grateful for the woodwork when Kilkenny came calling again a few minutes later. Healy whipped in a corner which picked out the dangerous Denis Walsh, but his ninth minute header crashed off the outside of the left post.

Walsh was a real menace throughout the game - he linked up well with Healy and Mickolaj Gorecki to torment the NEC - so it was no surprise when he found the net inside 14 minutes.

The real eye-opener was Walsh’s finish to an impressive move. Full-back Daragh Casey got them going with a neat ball up the left. Healy picked up play, feeding Walsh with a reverse pass from which he curled a sweet shot into the top right corner.

Brimming with confidence, Kilkenny doubled their lead just two minutes later. There was an element of luck about the strike, as in trying to cut out Gorecki’s flighted cross defender Wesley Gibbons turned the ball into his own net.

There was nothing fortuitous about Kilkenny’s third goal, however. They went close with a double chance just before it, Ignet doing well to push Healy’s 20th minute shot onto the post before scooping another Walsh header off the line from the resulting corner.

Kilkenny kept that pressure on from the next NEC kick-out. Pushing up, they forced their rivals to play the ball close to their box and paid the price when Gorecki arrived on the left and lofted an unstoppable shot over the helpless netminder.

Clearly stunned, it took the NEC more than 20 minutes to muster their first attack of merit. A great one-two between Alex Williams and Liam Hartigan created a chance for Lee Kearney, but he dragged his shot wide.

That was as good as the half got for the visitors, but while Kilkenny went back on the attack they couldn’t add to their lead.

Healy was frustrated the most, as first Ignet made a fine save to keep out Healy’s thundering 28th minute free-kick. Minutes later, his close range shot whistled wide of the post.

The second half saw Kilkenny show the defensive side of the game. Spurred on by a good save from Paddy Kehoe, the Cats were strong at the back as they shut the NEC out. Sub Mo Boston was impressive in the half, growing stronger as the game wore on to help his side maintain their clean sheet - and their 100% record.

Henry Shefflin in action for Kilkenny against Galway during the 2014 National League semi-final at the Gaelic Grounds in Limerick. Pic: Diarmuid Greene/Sportsfile