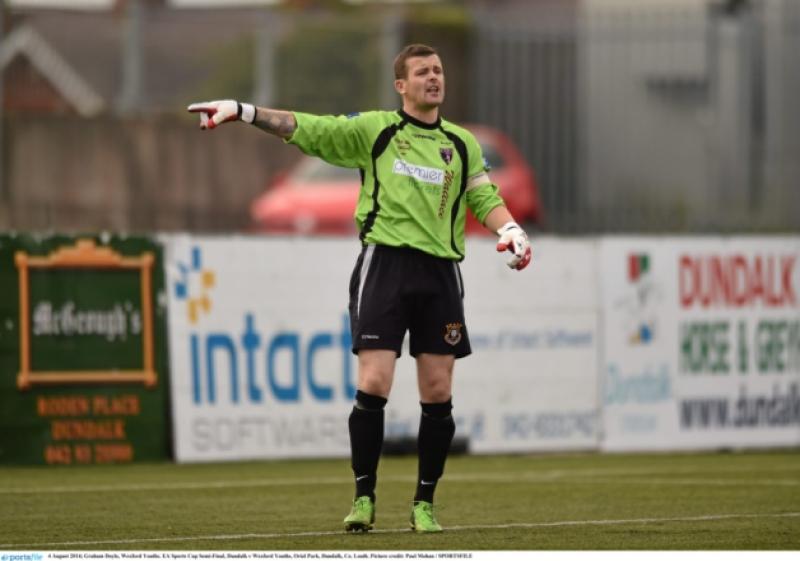 They may have missed out on a big prize, but Wexford Youths goalkeeper Graham Doyle has ended his season by catching a due reward.

They may have missed out on a big prize, but Wexford Youths goalkeeper Graham Doyle has ended his season by catching a due reward.

An ever-present in the Youths’ team, the Kilkennyman’s reputation as a top shot-stopper was reinforced by his selection in the PFAI First Division Team of the Year.

“I was over the moon when I heard I’d been named in the team,” he said. “At the start of the year I was talking about goals for the season and I remember saying that I’d be very happy if I made that side - I’m delighted it’s come true.”

The honour is well-deserved, and, a long time coming for Doyle. Although he has only dipped toe in League last few years, he has had great success throughout career.

“Lads have said to me over the years ‘why didn’t you go play (in the Airtricity League) sooner?’, but you can only go when the opportunity presents itself,” he said.

“To be honest, if the lads were still involved with Freebooters (Doyle’s brothers Sean and David were over the Blues junior ‘A’ team) I’d probably still be there, but Shane Keegan took a chance on me - a lot of it is down to him.”

Doyle is well-known for his junior soccer with Freebooters. He won every local honour with the club and played in all three of their Leinster Junior Cup successes. His career took a step up when he was called up to represent the Republic of Ireland with the Amateur squad back in 2009.

“Playing with the national team was a great learning curve,” he said. “It was a great starting point for going on to play with Wexford as I didn’t think the step-up to the Airtricity League would be as big as it is.

“There are the usual differences like fitness, but the ability of the players is a different level altogether,” he said. “I remember going out to watch Kilkenny City years ago and thinking it wasn’t that different, but it’s an unbelievable step-up altogether to the First Division, nevermind the Premier. We played Dundalk in the semi-final of the EA Sports Cup this year - given the level I came from, it was like playing Real Madrid!

“Clubs at the top level don’t waste chances,” he said. “If a lad gets through on goal - speaking as a goalkeeper - you know he’s going to hit the target. They work at the game full-time, so every part of their preparation is meticulous.”

And Doyle reckons there are plenty of locals who could hit the same heights.

“There are a load of players in Kilkenny who would get to that level - loads,” he said. “If you took the locals currently playing in Waterford, Wexford and Kilkenny and put them together you’d get a side which would easily compete at the top of the First Division.

“It’s a shame that so many lads who are playing at that level aren’t doing so with a Kilkenny team,” he said. “It’s such a pity, especially as Buckley Park is ready-made for it.

“I never fully appreciated having the team there when we used to go out and watch them every week,” he reflected. “I can see it now from the Wexford point of view - there were talks that Wexford might or might not have a team. I said to them this year ‘don’t ever let it go, because you won’t realise what you have until it’s gone’.”

Although he has played with the Youths for three years, City’s demise is something he still feels could have been avoided.

“The biggest mistake City made was letting Billy Walsh go,” he said. “He was starting to get locals involved, getting a core of Kilkenny players and was going well. If they had persisted a little longer, I think the team would still be there.”

Kilkenny’s loss was Wexford’s gain. After three seasons as a League ever-present, Doyle’s best campaign kept the Youths in the promotion hunt until the closing stages.

“We went unbeaten in our last 11 games,” he recalled. Prior to a 2-2 draw with Galway on the final day, Doyle kept three successive clean sheets for the Youths, 11 across the season.

“At the start of the year I set a target of eight clean sheets, so to beat it by three was great,” he said. “That last run of three in a row was something we’ve never done in Wexford.

“I was thrilled to achieve it. That, along with getting into the Team of the Year, is my biggest achievement in sport.”

Missing out on the playoffs was tough, but Doyle was still satisfied with how Wexford proved the doubters wrong.

“Every year I’ve been with Wexford, we’ve been favourites to finish bottom of the table,” he said. “We’ve finished fourth, fifth and fourth. That’s great for a team which operated with little or no money. Longford, who won the First Division this year, had a budget in the region of €250,000.”

The year had an added bonus - the role of club captain.

“I was reluctant to take the armband,” he admitted. “It helps that I’m older - although in my first season with the club I was older than everyone else in the dressing-room, including the management staff!

“You’re a link between the dressing-room and the coaching staff. On match days there are other duties. Referees, for example, will only talk to the captains. I think that’s something that could make life easier for officials at every level, even the local leagues.

“I’m enjoying everything about the game,” he said. “I’m 36, but I haven’t enjoyed soccer this much in a long time.”

The PFAI Awards will be presented in Dublin on Friday.