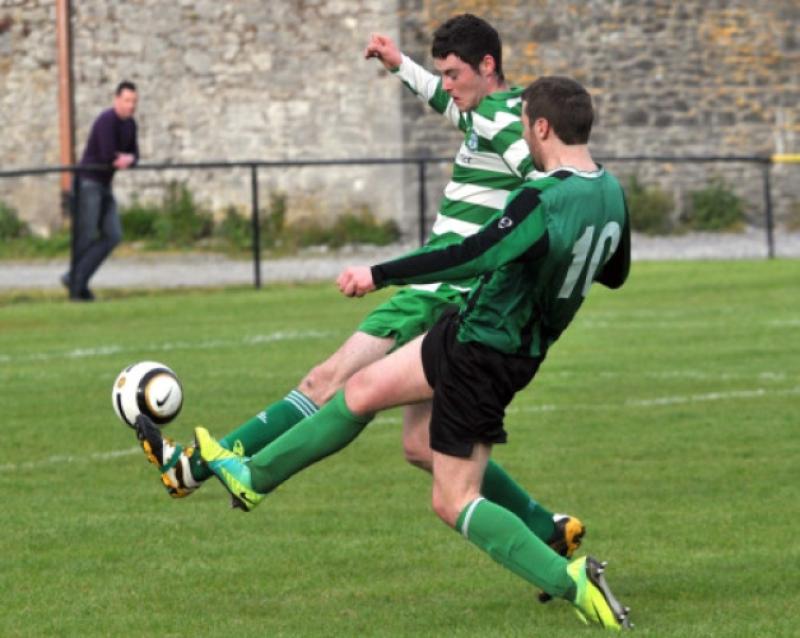 TULLAROAN’S dreams of a league and cup double were dashed by one of their own!

Teenager Eddie Teehan provided the winner as a youthful Evergreen C got their hands on the Division Two Ken and Michael Byrne Memorial Cup on Saturday evening.

The teenage Teehan - a neighbour of Tullaroan stalwart Ger Hodson - pounced for the only goal of the game after 23 minutes. The defender came up from the back for a free, a move which paid off when Jack Walsh’s delivery escaped the grasp of netminder Jason Cahill. The ball bounced in front of Teehan, who bundled it home from six yards out.

That strike was no more than Evergreen deserved, given that they had attacked the league champions from the off. Using the wings to good effect they had plenty of pace at their disposal, while Michael Rice and Graham Gorey linked defence and attack with some busy play in midfield.

Tullaroan took some time to get into the game, but almost made the perfect reply after going a goal behind. From the resulting kick-out Ger Brennan stormed his way into the box and let fly with a raking shot, but David Cummins got down to his right to push the ball away before it could be cleared to safety.

Brennan, who also had a goal ruled out for offside in the opening half, went close again just after the half hour. David Walsh floated a ball over the defence which Brennan skilfully took down, but Teehan got enough pressure on the striker to prevent the shot.

The remainder of the half saw both sides push for goals, but neither could make their chances count. Jack Walsh went closest for Evergreen, curling a 38th minute free-kick over the defensive wall but Jason Cahill was well placed to stop it. Ger Brennan also had another opportunity to draw Tullaroan level, meeting Gerry O’Dea’s 42nd minute corner with a glancing header, but Mikey Andrews was there to nod the ball clear.

Tullaroan made a fast start to the second half and almost found a swift way back into the game. Once more Ger Brennan was the target man when Danny Coogan pumped a long free towards the box in the 51st minute. Brennan connected with a clever looping header, which left David Cummins rooted to the spot as it sailed over his head, but the ’keeper was relieved to see the ball clear the bar.

Chasing that one-goal deficit Tullaroan kept on the front-foot, but couldn’t make their chances count. Richie Guilfoyle’s 52nd minute cross went straight to Brendan Burke, but the ball seemed to get stuck under his foot, limiting the level of power he got on the shot.

Tullaroan kicked up a notch again as the game moved into the final quarter. Sub Richie Guilfoyle sparked panic in the Evergreen ranks when he ran on to Brendan Burke’s excellent lay-off, but he dragged his 67th minute shot beyond the far post.

Still trailing, Tullaroan pushed everything forward in the closing stages. That tactic almost blew up in their faces when Kevin Ireland slipped Cormac Hogan through with six minutes to play.

Tullaroan looked sunk as Hogan connected with a low drive, but Jason Cahill made a fine save with his right foot - then an even better one when he got up to stop Hogan’s follow-up header!

Both sides were left to play the closing minutes with 10 men apiece - Evergreen lost Michael Rice to a second yellow, while Danny Coogan limped out of the game for a Tullaroan team who had already made three subs - but that did little to dampen the enthusiasm.

With time ticking down, Tullaroan gave it one last throw of the dice. David Roche almost snatched a late leveller when he crashed his 87th minute free off the base of David Cummins’s left hand post. Play pinged around the box, with Richie Guilfoyle teeing up Brendan Burke to have another crack, but this time the ’keeper got down to make a good stop.