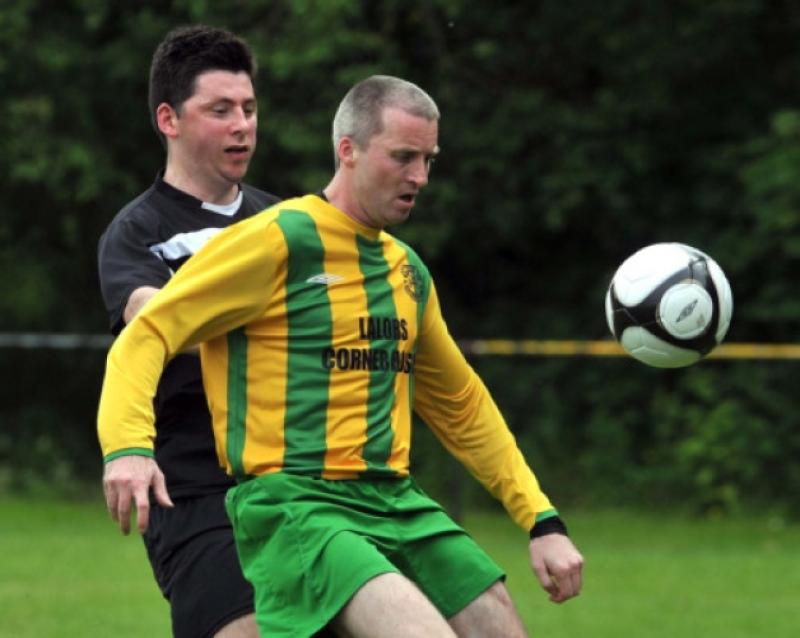 A SWIFT blitz helped East End United A add the silver lining to their successful season.

The Bennettsbridge club achieved their main goal when they won promotion to the Premier Division in April. They made sure they would go up with a spring in their step when they landed the Division One Cup at Derdimus on Sunday.

Key to East End’s success were two goals in three second half minutes that helped them to see off a dogged Stoneyford United.

Having taken an early lead and then lost it, United moved back into the ascendancy thanks to a powerful break from Michael O’Neill. The midfielder took a 70th minute pass from Sean Wemyss, then cut Stoneyford open with a searing dash from the centre circle.

O’Neill was untouchable as he sprinted past several challenges and made his way into the box. His shot was good, but netminder C.J. Delaney did well to get down to his right and stop the ball. That’s where luck went against Stoney however, as the rebound fell to an unmarked Hugh O’Neill to tap home.

The second part of the double whammy arrived with 72 minutes on the clock. Again, the impressive Hugh O’Neill was involved, combining with Paul Murphy to whip in a cross Michael O’Neill got on the end of. Delaney did well to stop the header, but although Wemyss finished the rebound play was called back for a foul on the sub.

Brian Lannon took the spot kick duties, giving Delaney no chance with a penalty hammered high into the top right side of the net to leave East End with one hand on the trophy.

The Bridge outfit were just as quick to take control in the first half, taking the lead with the first real attack of merit. With Paul Murphy an ideal target man up top, Stoneyford were undone when Murphy headed a long Cathal Daly kick-out down to Hugh O’Neill. The young midfielder cut in from the right and waited for the right moment before slipping a return pass back into Murphy’s path.

The striker saw his chance and took it, drilling a low diagonal shot under the diving Delaney.

Murphy was heavily involved in everything East End did in the opening quarter, linking up well his team-mates to keep Stoneyford pinned back. One such move saw Murphy break up play in the 16th minute and send Michael O’Neill haring down the right. The midfielder cut into the box, where the unmarked Ciaran Dowling was waiting for a squared pass, but O’Neill went for the shot that Delaney comfortably coped with.

East End could and should have doubled their lead four minutes later. Stoneyford failed to clear a loose ball in the centre circle and seemed certain to fall foul when Wayne Dowling’s clipped pass sent Michael O’Neill on his way. Breaking into the box O’Neill steered his shot past Delaney, but the ball flashed inches wide of the far post.

Stoneyford had been under the cosh, but almost restored parity after the half hour. Midfielder John O’Shea was the inspiration, skipping tackles as he set off on a strong run from his own half before playing the ball down the right. Martin Murray picked it up, cutting inside Robbie Ryan and beating Daly with an angled shot, but it finished just outside the far post.

The game swung back the other way, but Stoneyford managed to prevent themselves from falling further behind. Sean Gibbons saved his side, heading Brian Lannon’s 45th minute header to safety from the post after Delaney had got his hands behind the initial effort.

East End had another pop at the target in the early stages of the second half when Paul Murphy stole in to get on the end of Hugh O’Neill’s 50th minute cross. The striker had a free header, but put it wide of the mark.

That missed chance would come back to haunt East End as, within seconds, Stoneyford shot themselves level. From the resulting kick-out James Moran flicked the ball on to Conor Coffey, who steadied himself before lobbing the ball over Cathal Daly, who couldn’t keep it out of the net.

Stoneyford were revived by that goal, but try as they might they couldn’t get their noses in front. Moran had a great chance to do just that when he got on the end of a Martin Murray cross after some good work from Gerry Mulcahy and John O’Shea, but his sidefoot shot sailed over.

That proved to be a costly miss, as East End’s double strike would prove. Although Stoney never gave up - sub Brian Donovan rattled the bar with a thumping 82nd minute free before Moran did the same with a looping 86th minute header - they couldn’t prevent their rivals from making off with the spoils.