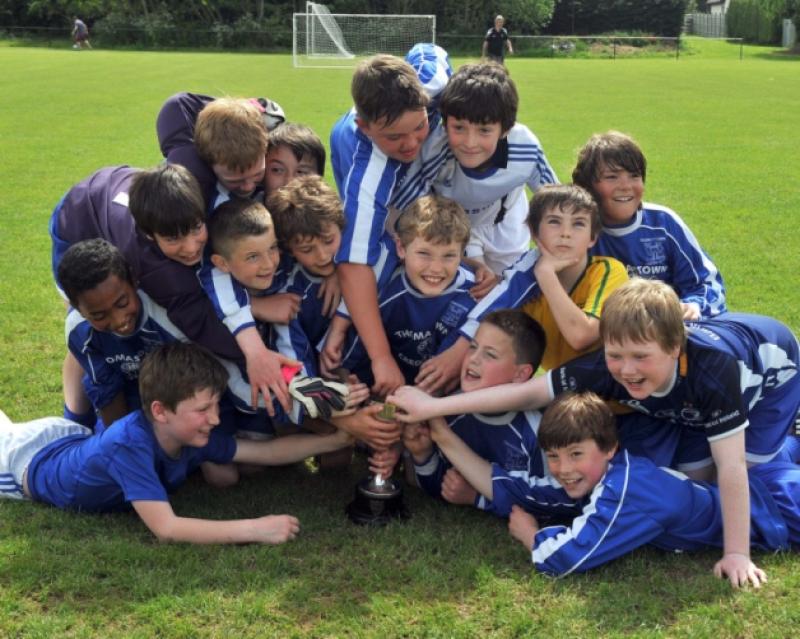 A late goal from Casper Konopka saw Thomastown United celebrate with a real cup of cheer.

A late goal from Casper Konopka saw Thomastown United celebrate with a real cup of cheer.

Sprang from the bench the youngster made the difference, scoring the decisive goal as the Grennan boys beat Stoneyford United to capture the under-11 David Doran Cup.

There were just three minutes left when the sub made his mark. Stoneyford failed to deal with a bouncing Luke Connellan shot and were punished as Konopka, watching the flight of the ball, nipped in to force it home.

It was a good ending for Thomastown, who began the game in similar goal-hungry fashion. The match was just four minutes old when the Blues had their first shot at the target, Mikey Sheehy getting on the end of a Bayhammond cross, but Stoney goalkeeper Sean Moore made a good save.

The netminder had no such luck next time round, as Thomastown went one up on 11 minutes. Racing on to a ball that bounced into his path, Bayhammond showed great strength to hold off his marker, and then the awareness to deftly flick a low shot back across the goal and inside the far post.

Stoneyford might have been behind, but it wasn’t for long.Within two minutes they were back on level terms, Shane Fennelly drilling a low diagonal ball into the box. A Thomastown defender tried to cut it out with a sliding challenge but that only knocked the ball into Denis Walsh’s path.

A quick shimmy took Walsh past the goalkeeper, before he showed the composure to add the finish despite pressure from another challenge.

The game continued to flow from end to end, but it was Thomastown who had the better chances. They kept that pressure on, getting their reward when Bayhammond bagged his second goal with 24 minutes on the clock, the striker showing courage to get his head to a dangerous Ray Lawson corner and flick it into the net.

Thomastown held that lead until the second half, but were rocked by a Stoneyford stunner two minutes after the restart.

There seemed to be little danger when Denis Walsh stood over a free-kick some distance out, but the Stoney midfielder knew what to do.

Giving his all, Walsh let fly with a thunderous shot that rocketed into the top right corner of the net, giving Tony Collins no chance of making the save.

It was a goal that gave Stoneyford great heart, which they used to push on, but they were hauled back when Konopka fired home the late winner.