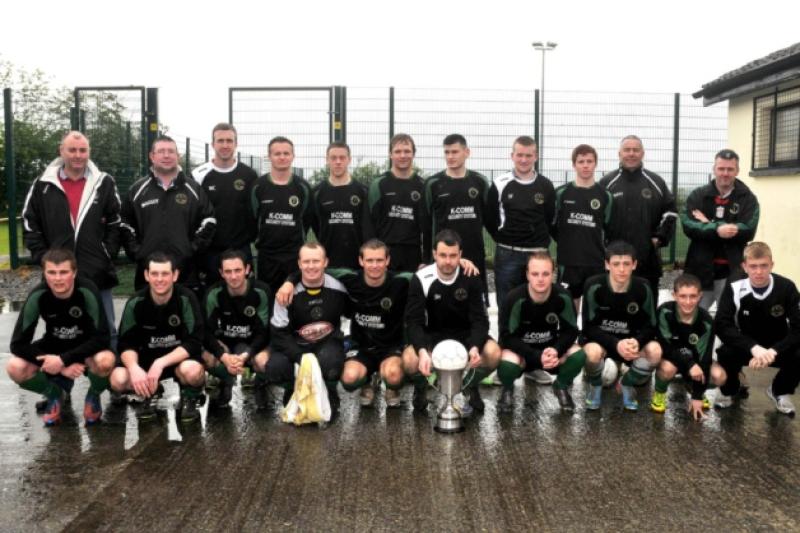 Sunday’s Cup final in Derdimus saw the impressive Freshford cut their opposition to pieces time and time again as they looked dangerous with every move they made upfield.

After just five minutes Steven Farrell opened the scoring, then added his second just before the ten minute mark.

It set the tone for the afternoon’s play, Freshford knocking the ball about with increasing confidence. The pouring rain didn’t seem to affect Paul Guinan, the ball seemingly glued to his foot as play revolved around the central midfielder.

Guinan then set up Vaughan for the first of his three goals. Releasing the forward down the right flank, Vaughan skipped past the Bridge defence and calmly finished with his favoured right foot. Guinan continued to dictate the play, his wingers providing more than enough options out wide.

The midfielder cracked a shot from distance off the woodwork, something which he would do again in the second half. It was testament to Freshford’s first half performance that he had the confidence and awareness to shoot from such distance.

With ten minutes to go before the break, Vaughan struck again. His second was Freshford’s fourth, and they strolled off the pitch at the break they knew all they had to do was see out the remaining 45 minutes to get their hands on the trophy.

Bridge United were not ones for lying down however, and looked much more impressive in the second half. Left full-back Marty Dalton had looked their main threat going forward in the first half. His direct running was a concern for Freshford, who had started somewhat lacklustre following the interval.

Evans Wallace lofted a free kick over the crossbar before Dalton handed them a lifeline. His mazy run cut inside the Freshford defence and his stuttering shot bounced off the post and crossed the line.

It wasn’t long before Freshford restored their four goal lead, after winning a free-kick inside the Bridge half. Guinan again provided a swinging ball which Robbie Dowling inventively headed back across goal to square for the lurking Vaughan.

Bridge snatched their second goal of the game when a dangerously placed free kick was met by the head of Keith Glynn, the ball nestling in the far corner of the net.

It was only a brief respite though, because when Vaughan went down in the Bridge penalty area under pressure, Freshford were awarded a spot-kick. Steven Farrell coolly converted to seal his hat-trick and they held out the Bridge attacks from then until the final whistle.

They had come solely to win, and did it in emphatic style. By far the stronger side on the day, the impressive performances of Guinan and Farrell would have received man of the match accolades any other time, but Vaughan’s attacking masterclass was something remarkable in a rain-soaked Derdimus.