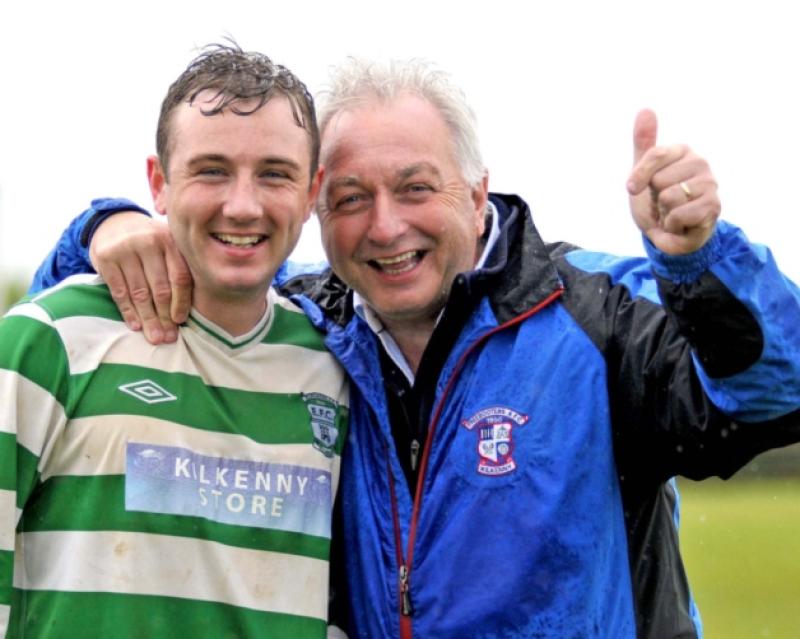 Ninety minutes of tense and tough action failed to provide a clue as to who will lift the Premier Division crown.

Ninety minutes of tense and tough action failed to provide a clue as to who will lift the Premier Division crown.

The destination of the title is still undecided after Evergreen A and Freebooters A couldn’t be separated at the Kells Road on Sunday.

The only clear outcome from the 0-0 draw is that both sides are still in the hunt for the spoils. Having finished their campaign Freebooters now have to play the waiting game - Evergreen have to play East End United and Thomastown United in their catch-up matches; win both and they’ll force a playoff with the table-toppers.

The mood from both camps summed up the morning, when a win either way would have settled the silverware.

“It was a tight game,” said Evergreen boss Eddie McEvoy. “It got to the stage where it became more about not losing for both sides.”

Across the pitch his opposite number Anthony Hanney reckoned both teams had spells where they could have decided the outcome.

“It was a game where we both could have taken the three points,” said the ‘Booters boss. “They had chances in the first half, then it was our turn in the second.”

In a match which was played out like a chess game both sides played tentatively, almost waiting for the other to make a mistake they could pounce on.

The visitors had the first bite at the cherry when Dylan Whearty tried to head a long Michael Lambert free to safety. The ball flew up in the air, falling just right for Dessie Hayes, but his sixth minute shot flew over.

The hosts took their time to respond, but caused Blues hearts to flutter when they did. Linking up well with David Grincell, Mark Slater flashed in a low diagonal ball that zipped across the face of goal in the 17th minute, but no-one was there to add the finishing touch.

Evergreen grew into the game after that, taking control in midfield and driving forward. Brian Jordan went close with a 20th minute header, but just couldn’t get enough power on it to really trouble Michael Lambert.

He went closer again nine minutes later, getting on the end of a teasing Chris Whearty corner, but his glancing header was just beyond the far post - and the boot of the incoming Grincell, who was inches away from making a connection.

The search for the opening goal continued, but still neither side could make that final step. Chris Whearty went close, stepping on to Damien Kelly’s quickly-taken 34th minute free before letting fly, but his shot from outside the box scorched over the bar..

The second half started with Evergreen pushing on in the same attacking vein, but they couldn’t make the breakthrough. Grincell had another chance when he moved to get on the end of a venomous Whearty corner, but the ball cannoned off the Evergreen man and went wide.

Freebooters began to press on more in the new half, forcing Evergreen to defend in greater numbers. A foul on Aaron Molloy just on the edge of the box gave ‘Booters a good chance from close range with seven second half minutes on the clock. Damien Raggett unleashed a powerful shot, but his effort flashed just wide of the left post.

The game still had a ‘cat and mouse’ feel to it, with both teams waiting for the other to make a defensive lapse. Evergreen went close to making the breakthrough when a gap at the back gave Chris Whearty time to whip a low ball in for Brian Jordan to race on to. Watching as Michael Lambert raced from his line, Jordan picked the right time to loft the ball over the advancing netminder, but his diagonal chip dropped wide.

A see-saw game went back up the other end, where Evergreen had to be at their best to stay on level terms. Startled by James Kelly’s vicious free, Evergreen couldn’t prevent Raggett from flicking the ball on to Dessie Hayes. The striker’s shot was half-blocked by Dargan and looped goalwards, but Niall Andrews got back to head it to safety.

The game became cagier as the half wore on, with both sides realising that one goal would settle it. David Grincell did his best to swing the tie Evergreen’s way - one break from midfield that ended with a low shot that was saved by Lambert, while another effort was beaten away.

With time running out the hosts went agonisingly close to snatching all three points. Picking up Brian Jordan’s diagonal ball sub Ben Hickey did well to hold up play long enough until support arrived, then whipped in a cross, but Jordan’s powerful 90th minute header went over.

Hickey himself had the last chance of the game, sneaking in at the back post to nod a Jamie Owens delivery back across the box in added time. For a second it looked like the ball was going in, but defender David Rice - who had a solid performance throughout - was there to nod the ball clear from the back post.