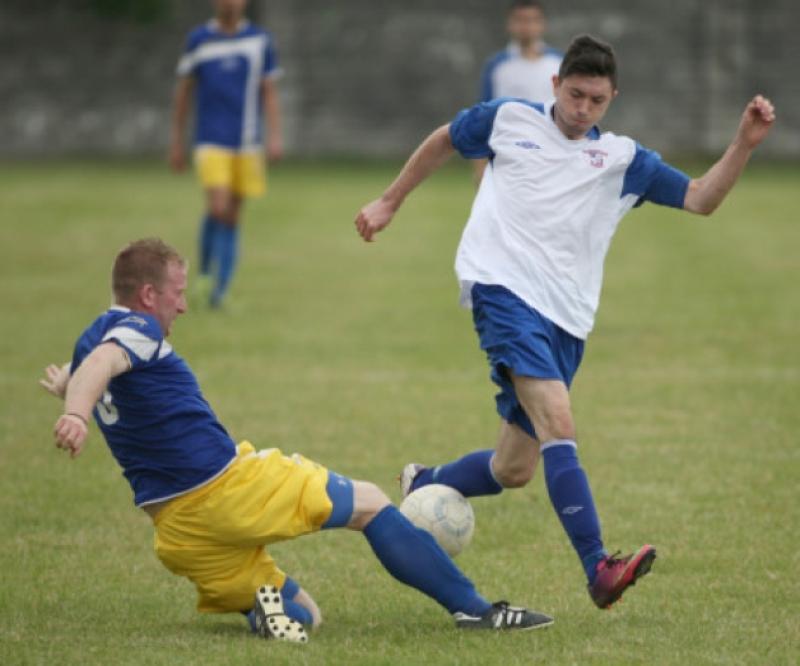 The opening stages of the Mock Lawlor Cup ended on with a bang as Freebooters blasted their way into the semi-finals.

The opening stages of the Mock Lawlor Cup ended on with a bang as Freebooters blasted their way into the semi-finals.

’Booters, two-time winners of the preseason tournament, proved how hungry they were to get their hands on the trophy again as they blitzed Cashel Town on the Fair Green on Saturday.

Doubles for the twin threat of Dessie Hayes and Damien Raggett, a burst which included three goals blasted home in as many minutes, sent the Blues on their way to the final four well before the half-time whistle.

Keen to quickly stamp their authority on the game it took Freebooters just three minutes to trouble their visitors. James Kelly floated corner to the back post, where Cathal O’Leary made a telling connection, but his header clipped the top of the bar.

Freebooters shrugged off that miss, making amends just six minutes later. Aaron Molloy was the architect, controlling a high ball and giving it to Ger Hayes, who slipped Dessie Hayes through to pick his spot.

Cashel found the going tough in the early stages, much of it because they couldn’t break through a Freebooters midfield where Paddy Cahill pulled the strings.

It took the visitors more than 20 minutes to have their first shot on target, Danny Pledger getting off a low shot which Michael Lambert comfortably dealt with. Their next attempt was better, James Harding racing on to a Paul Hoare pass and getting off a low shot from a tight angle, but the ball hit the post.

Pledger was quickest to the rebound, but he was denied again when David Rice made a goal-line clearance.

Freebooters heeded the warning, but even they must have been surprised at how they responded.

The Blues hit back, doubling their lead when Damien Raggett raced on to Jack Poyntz’s defence-splitting pass on 34 minutes. Sprinting between the last two defenders, Raggett drew Ryan from his line before firing home.

Hungry for goals, within 60 seconds Raggett was celebrating another, volleying a diagonal ball into the bottom left corner of the net.

The goal whirlwind had room for more, as Freebooters all but wrapped the game up by the 37th minute. Cashel thought they had done enough to block a Poyntz cross from the right, but when the ball broke Dessie Hayes was on hand to slam in the rebound.

With both sides making a series of changes the second half was expected to be a more timid affair, but Freebooters had a different idea. Three minutes after the restart they hit Cashel for a fabulous fifth goal, Paddy Cahill drilling a long range free-kick inside the right post.

The tempo dipped after that, but there was still time for the Blues to add a sixth. Jason Hennessy, one of several young ’Booters on show, did well to gather Ger Hayes’s 86th minute pass but even better to turn in a tight space and tuck the ball away.

The semi-finals of the Mock Lawlor Cup will be played during the week, with the final to be held on the Fair Green this Saturday at 7pm.