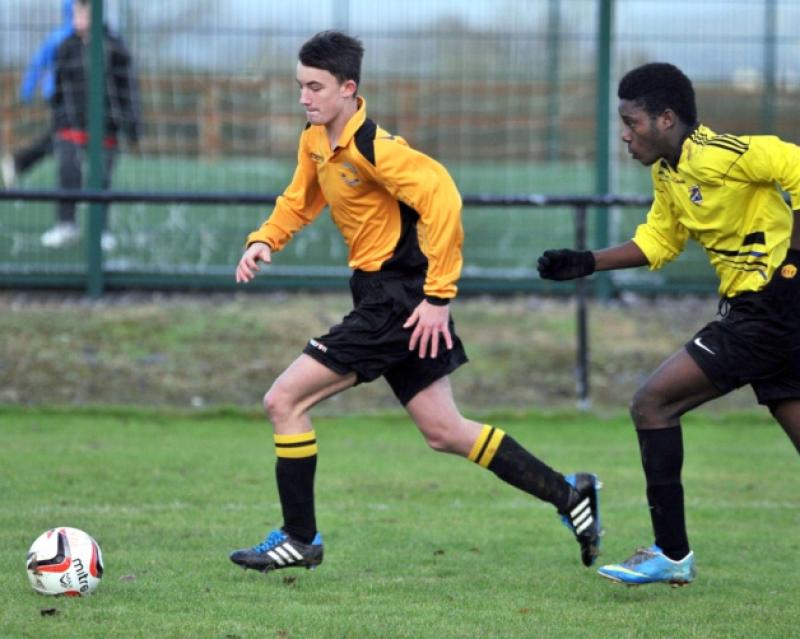 Goal-hungry Brandon McGinley was the toast of Derdimus as the Kilkenny & District League’s under-16s made a winning to start to their season.

Goal-hungry Brandon McGinley was the toast of Derdimus as the Kilkenny & District League’s under-16s made a winning to start to their season.

The young Freebooters hitman helped himself to a strike in either half as the Cats overcame a strong Kildare challenge to open their inter-league campaign in fine style.

McGinley’s second goal proved to be the vital one, as his 60th minute effort gave the young side - and their young managers Ben Ryan and Craig Wall - all three points at a chilly Derdimus on Sunday afternoon.

In an excellent move that started in midfield, the Cats really showed their claws to cut Kildare wide open. Jordan Molloy and Eoin Wall did the initial work, sending McGinley racing through on goal.

Sprinting past the last defender, McGinley showed no sign of nerves as he drew the ’keeper from his line before coolly tucking the ball inside the post.

The Cats will be happy to have earned the win from what proved to be a high-tempo game from the off.

Kildare sped into action and went close early on through Billy Kamba, who stabbed wide when a deflected Kalum Ennis free bounced his way, while Kilkenny defender Kyran O’Sullivan had to look lively to turn Cian Harvey’s stinging shot away from danger.

Kildare pressed on, Niall Faherty drawing a good save from netminder Calvin Brophy, but once the Cats found their attacking edge they took control of the game.

There were just 11 minutes on the clock when the hosts snatched the lead. Jordan Molloy and Eoin Wall, two players who impressed all day, did the legwork as they moved the ball around while searching for an opening.

While Molloy went close with a shot that was blocked by a Kildare defender, they didn’t let up. With play recycled by Wall and Molloy, they got their reward when a low ball across the face of goal was turned in by Rory Monks.

Kilkenny were deserving of their lead - scorer Monks was yet another member of a composed side who looked to move the ball at pace - but their feathers were ruffled when Kildare netted a stunning equaliser.

Pressing forward, Kildare put the pressure on Kilkenny as they looked to clear their lines. Pouncing on a Brophy kick-out, Rabi Zaopona won possession and teed up Kalum Ennis.

Although still some distance out, Ennis went for goal. His faith was rewarded, as he unleashed a thunderous 17th minute strike that rocketed into the top left corner of the Kilkenny net.

Parity was short-lived, however, as Kilkenny hit back in barnstorming fashion. Brophy was the architect, pumping a long 20th minute kick-out deep into Kildare territory.

Monks won the ball, flicking it on to Wall, who broke clean through. Although his shot was stopped by Gary Gorman, Wall showed great presence to chase the rebound and square it for McGinley to tap home.

Kilkenny were on fire after that goal. McGinley, Wall and Monks proved as much, running riot with a series of attacks and shots which Gorman did well to deal with.

However, just when it looked like they would hold their advantage until half-time, Kildare struck. In a cutting move from left to right, Billy Kamba’s cross was picked off by Rabi Zaopona, who drilled the ball back across goal and inside the far post.

The second half saw Kilkenny go back on the attack, but they couldn’t find a way through. Eoin Wall went close with their best effort via a clever lob, but although the ball soared over netminder Gary Gorman it just cleared the bar.

The pressure paid off when McGinley bagged his second on the hour, but Kilkenny had to stay strong to keep Kildare at bay.

They had a stroke of good luck too, as Dylan Herbert’s 75th minute corner cannoned off a post, while the follow-up shot from Kalum Ennis was deflected over, but the Cats held firm until the final whistle.