Wonderful Whelan wins it for Thomastown 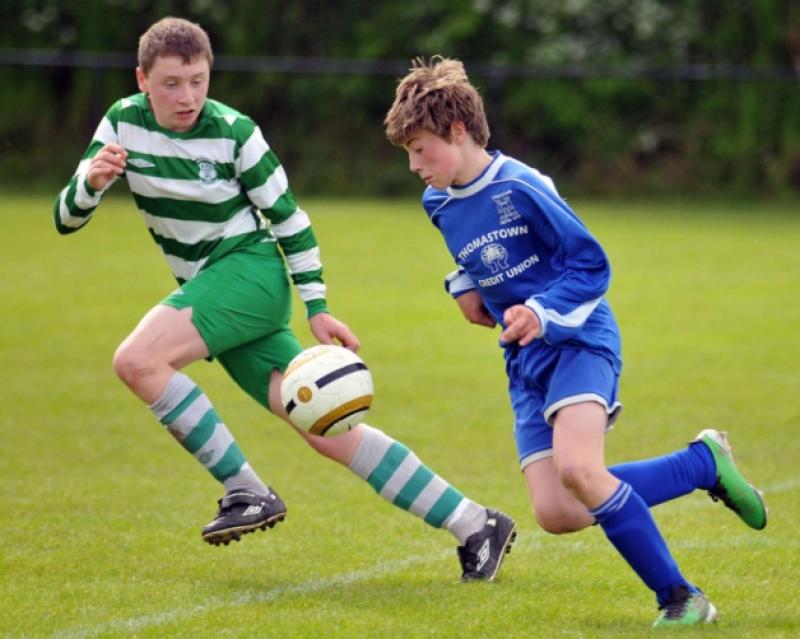 A wonderful hat-trick from Colm Whelan saw Thomastown United’s under-15s secure the second leg of a league and cup double.

A wonderful hat-trick from Colm Whelan saw Thomastown United’s under-15s secure the second leg of a league and cup double.

United, who have blazed a trail through the Kilkenny & District League in recent seasons, had their young gem to thank as his treble sank Evergreen in a pulsating final at Derdimus on Saturday.

Whelan had to bide his time for the goals that secured the silverware, striking twice in the second period of extra-time. In a game between two talented sides, Whelan linked up well with team-mate Rory Monks to push United into the lead on 92 minutes.

Given time and space to run at the Evergreen defence, Monks made a break which took him from his own half into the Evergreen box. His shot took a deflection off a green and white body, but fell into the path of the on-rushing Whelan, who calmly tucked home the sidefoot shot.

It was a strike which the youngster’s performance deserved. He thought he had scored his first goal much earlier than that, Whelan heading home from a Daithi Barron cross inside 60 seconds, but the ‘goal’ was ruled out for a push on an Evergreen defender.

Thomastown were the busier of the two sides in defence, coming to the rescue with some vital clearances. Dacel Fwamba saw his 22nd minute shot cleared off the line by Whelan. The striker was frustrated again after the half hour, beating Stephen Wemyss with a deft lob, but Brian Staunton got back to hack the ball to safety.

The danger wasn’t all one way; Fintan Fleming had to be at his best to claw a venomous Whelan shot away from the inside his right post. He was called into action again in the early stages of the second half, doing well to keep out David Griffin’s close range shot.

Evergreen went closer still to breaking the deadlock on 52 minutes, when Johnny Manogue got on the end of a teasing Conor O’Keeffe free. The sub appealed that his bouncing header had crossed the line before Wemyss stopped it, but the pleas were waved away.

Rub of the green

The city side pressed on, and got a rub of the green when they went in front with nine minutes to play. Trying to launch an attack from the left, Manogue dropped in a testing cross which bounced in front of the advancing Wemyss, clearing his head and going into the net.

Evergreen’s joy was shortlived, however, as Thomastown struck back with just five minutes left. Monks did the hard work, dashing down the right and getting to the endline, where a neat cut-back found Whelan with space to smash home the equaliser.

That parity remained into the second half of extra-time, until Whelan grabbed his second. Evergreen tried hard to find a leveller of their own - Manogue had strong penalty claims waved away when he clashed with Shane Maher on the edge of the Thomastown box.

The city side kept searching for another goal in the closing stages, but it was Thomastown who got it. Chasing a clearance, Whelan got his reward when he completed his hat-trick, controlling the dropping ball before flashing a low shot into the bottom right corner of Fleming’s net.