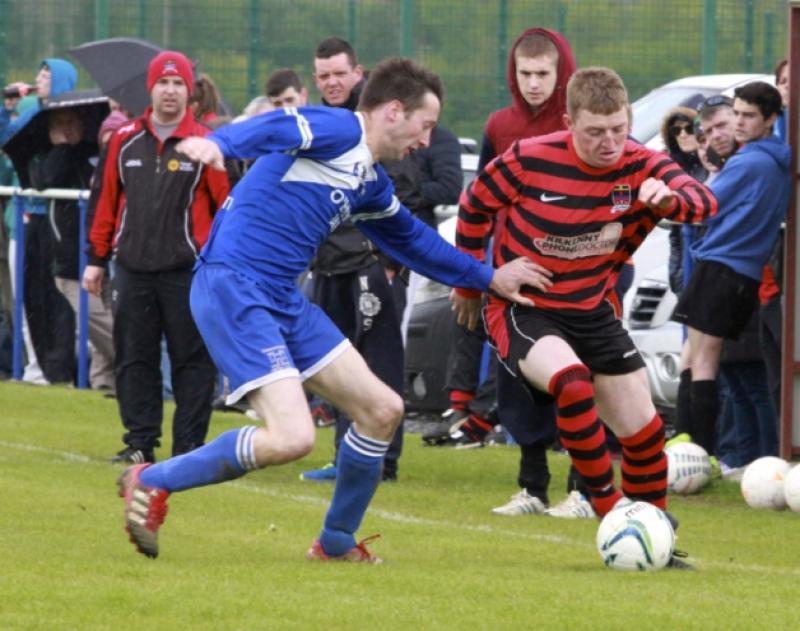 Much like the old saying that if you wait long enough for a bus, two will come at once, Thomastown United found that patience paid off at the double on Sunday.

Much like the old saying that if you wait long enough for a bus, two will come at once, Thomastown United found that patience paid off at the double on Sunday.

Dessie Walsh reaped the rewards, scoring twice in little over 60 seconds, as the Blues beat Callan United and kept their hopes of adding the McCalmont Cup to their Premier Division title very much alive.

Walsh made the breakthrough in the 59th minute, ghosting in at the back post to meet Mick O’Neill’s inswinging corner with a powerful header that proved unstoppable.

Sixty seconds later, Walsh did it again! This time O’Neill went out to the left to take another corner. Once more he fizzed the ball in. Once again Walsh was quickest to react, losing his man with a run off the back post before his bouncing header hit the net.

The quick double whammy was a reward for Thomastown, who showed a very patient approach throughout Sunday’s quarter-final.

They had to have that composure, as Callan brought a game-plan which stifled the hosts’ main threats.

Thomastown’s midfield, so often the heart of their winning performances, was harassed and harried by Callan, a side who have shown great form in the Cup in recent years.

The visitors were quick to swarm their opponents, limiting their time on the ball. The tactic worked to a certain degree, but the regimented Callan couldn’t provide the dangerous-looking Ian McLoughlin with the ammunition with which to trouble Thomastown netminder Rory Leadbetter.

Rise to the title

Thomastown have played a patient brand of football this season, a factor in their rise to the Premier Division title. They took things steady here too, waiting for the right moment to strike, but found Callan’s defence were prepared to put in a real shift.

The Callan goal led a charmed life in the first half, with the visitors clearing no less than three headers off the line.

Thomastown thought they had taken the lead when Dessie Walsh got a flick on to Mick O’Neill’s 17th minute corner, but Johna Culhane was there to head the ball off the line. C.J. Browne went closer with a powerful 23rd minute effort, again from an O’Neill corner, but Matthew Lowth made a vital stop at the back post.

The ‘hat-trick’ was completed on 27 minutes. Again O’Neill was the provider, whipping in a ball which Walsh headed back across goal for Nathan Sherry, but his effort was stopped by John J. Egan, who headed clear from under his own crossbar.

Callan, who had played with the slight advantage of the diagonal breeze, increased their efforts after the restart.

The introduction of Dan McCormack was a help - his pace was a real handful - but once Thomastown stepped up the pace, and Walsh netted his quick brace, there was no way back for the visitors, who missed the threat of the absent Simon Burke.

The hosts weren’t content to finish with just two goals - Alan Costigan made another goal line clearance, getting back well to block Steven Connolly’s close range shot - but they did get their reward soon after.

Again, the set-piece provided the outlet. Once more O’Neill delivered a menacing corner, but this time Andy Kavanagh was there to add the finish, running to the near post before getting a flick-on the ball to send it crashing in at the back post.

McCalmont Cup holders Freebooters had a busy Bank Holiday Monday, but it turned out to be very productive. The Blues booked their place in the final four thanks to a 5-1 win over St Ann’s in Gortnahoe.

Although still suffering something of an injury crisis - sub goalkeeper Donal Brennan had to be used outfield when he came off the bench - ’Booters still had too much for their Tipp rivals. Jason Hennessy and Cian Loy netted a brace apiece for the Premier Division side, with Ger Hayes adding the fifth as they eased their way into the final four.

The first semi-final places were booked on the Kells Road, where hosts Evergreen had mixed fortunes in two city derbies. The A team earned their place with a win over St Mary’s, while the B team went down to Newpark.

Ben Ryan broke the deadlock in the all-Premier clash, heading home from a Henry O’Neill corner in the last minute of the first half - he had clipped the bar with a free-kick moments earlier - before two goals in quick succession from Henry O’Neill stretched their lead in the second half.

There was still time for a fourth, David Grincell marking a return to his old stomping ground with a late goal for Mark Ryan’s side. Their reward is a final four clash with champions Freebooters A.

Two early Jamie Owens goals put Evergreen A in the driving seat against the Saints, while a quick brace from Ciaran Snype and Sean Barcoe made it 4-0 by the 50th minute, a lead they stretched to five when Jason Quan was on target on the hour.

Chris Whearty also got in on the act, adding the sixth for Packie Holden’s side, who now face Maher Shield final opponents Thomastown United in the semi-finals this weekend.