Wexford hit with a bunch of fives! 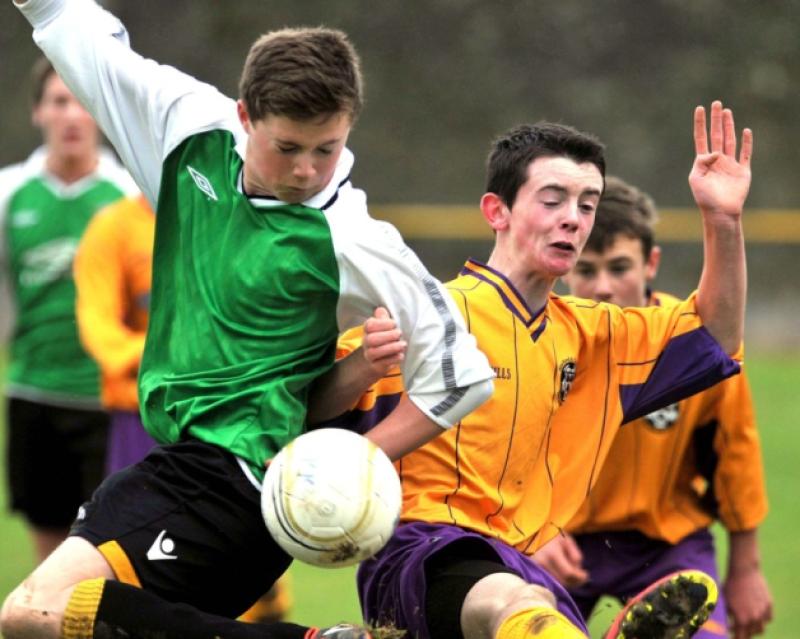 A strong attack and a firm defence proved key as the Kilkenny & District League’s under-15s got their inter-league season off to a winning start.

A strong attack and a firm defence proved key as the Kilkenny & District League’s under-15s got their inter-league season off to a winning start.

Kilkenny, who won the Kennedy Trophy last year, showed different sides to their game as they came through a testing challenge from Wexford at Derdimus on Sunday.

While there was never a doubt about their attacking qualities - especially with Adam Masood and Colm Whelan in their ranks - it was Kilkenny’s defensive mettle that impressed most, especially when Wexford upped the pace.

Two down at half-time, the visitors came out with all guns blazing on the restart. Pouring forward, they got an early break when Kyle Kennedy’s half-cleared corner was forced across goal by Nathan O’Connor and slammed home by Stevie Kearns.

Once they halved the deficit Wexford began a relentless charge for the equaliser, but Kilkenny held firm. While Mark Power marshalled his defence goalkeeper Michael Walsh also did his bit, making a smart save to keep out Michael Andrews’ long-range 48th minute shot.

The Cats weren’t completely camped in their own half. Using attack as the best form of defence they showed their teeth, O’Connor making a fine tackle to deny Masood.

Adam Kenna was another force in attack, playing a clever reverse pass that sent Whelan through. An unselfish pass gave Cillian Power a sight of goal, but somehow Wexford blocked the shot.

The visitors were on the front foot again soon after, bringing the best out of Walsh. The ‘keeper showed a strong hand to stop Eoin Murphy’s 52nd minute shot, then excellent reflexes to parry a deflected corner before getting to his feet to beat out Kevin Kenny’s point-blank rebound.

Having weathered the storm, the Cats hit back and flattened Wexford’s resolve. After going close with a shot turned out for a corner, Cillian Power restored Kilkenny’s two-goal lead when he turned the ball home after Mark Power glanced on Gavyn Blanchfield’s corner.

Kilkenny had been just as sharp in front of goal in the first half. Adam Masood led the charge, forcing Colum Feeney to leave his line and make a good save after just five minutes.

Masood also has two goals ruled out for offside, but the rampant Cats shrugged off that disappointment and stormed into the lead.

Michael Walsh’s booming 23rd minute kick-out did the initial damage, as Wexford tried and failed to clear their lines. Kilkenny captain Colm Whelan picked up play, prodding a low ball through for Masood to turn goalwards. Feeney got his hand to the shot, but couldn’t stop the ball from spinning over the line.

Once they found the opening goal, Kilkenny wasted little time in doubling it. Following a fast break down the left, Adam Kenna worked the ball on to Whelan. Spotting Cillian Power on a charge Whelan teed up his team-mate to rush in and unleash a shot that had too much pace for Feeney to keep out.

It wasn’t all one-way traffic, as Wexford finished the half quite strongly. Stevie Kearns served notice when his quick pass beat the Kilkenny defence and sent Brandon Sinnott racing through, but Walsh dashed from his line to smother the danger.

Walsh was called into action again on the double before half-time. First he got a good punch on Todd Hynes’ 37th minute corner, then moved smartly to finger-tip the rebound from Stevie Kearns over the bar.

Wexford continued their charge after the interval, and kept it up even after Kilkenny went 3-1 up. A Patrick Barron penalty, awarded after Kevin Kenny was barged in the back, made it a one-goal game again with 12 minutes to play.

However, Kilkenny weren’t about to fold. Breaking down a Wexford move, they turned defence into attack.

Sean Manogue got them going, winning possession on the left. Quick passes between Adam Masood and Gavyn Blanchfield ended with playing falling at the feet of Colm Whelan. Stepping inside his marker, Whelan dinked a clever lob over Colum Feeney, the ball crashing into the net via the far post.

The win was secured when Whelan netted again five minutes from time. Power showed great strength to win a kick-out and tee up his colleague, who calmly steered home Kilkenny’s fifth goal.