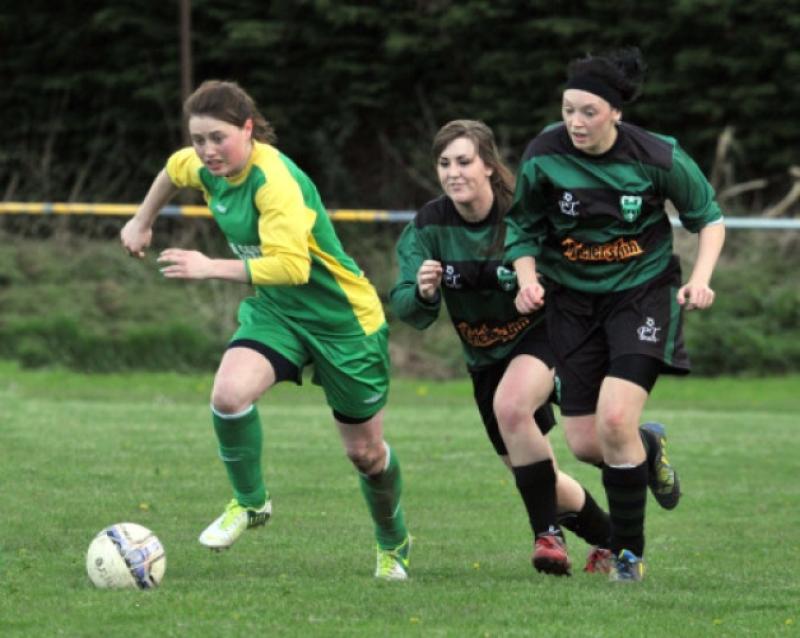 TULLAROAN ended their season with a dream double - but only after a last gasp smash and grab.

The league champions added the Women’s Cup to their trophy cabinet, shattering East End United with a 90th minute winner at Derdimus on Saturday night.

The game was edging closer to extra-time when Tullaroan gave it one last push. Trish Mullally created the chance, whipping a menacing corner into a packed box. East End tried to clear it, but the ball came off a Bennettsbridge player and ended up in the net.

It was a sucker punch goal to concede for United who, to continue the boxing analogy, were miles ahead on points midway through the contest. Although neither side had seen much action of late - the league was wrapped up in February - East End looked fresher in the first half.

Although Tullaroan made the early openings thanks to Breda O’Neill’s hooked shot and Katie Delaney’s controlled strike it didn’t take East End long to use their energy to good effect.

The game was only 12 minutes old when they had their first shot at target, and the best chance to open the scoring. Caoimhe Shiel started the move, picking up a throw-in on the left and sending Jenny Brennan on her way.

The striker raced into the box and pulled the trigger, but netminder Jennifer Russell did well to stop the shot. The danger wasn’t fully over, as the ball spun loose, but Russell clawed it back before Aisling Brennan could pounce.

That was close - but East End went closer again just a few minutes later. Laura Dooley’s throw was worked on by Linda Hoyne to Brennan, who unleased an instinctive shot from distance. The ball looped over Russell, but much to the ’keeper’s relief it clipped the post and came straight back out.

United had the wind in their sails by now, but couldn’t make it count. Laura Dooley saw a 20th minute close range shot take a deflection and finish just off-target. She tried again from the corner, meeting Aine Lannon’s delivery with a waist-high volley, but Russell reacted smartly to push the ball to safety.

East End were getting closer and closer, so it was no surprise when they took the lead in the 24th minute. After her free-kick was beaten away Jenny Brennan found the net from the corner flag, firing in a ball which curled straight in at the near post.

They could have hammered home that advantage but spurned the chance to double their lead before the half hour. Zara Brennan weaved her way into the box but although she beat Russell her shot hit the post. Jenny Brennan latched on to the rebound, but defender Irene Guilfoyle came to her side’s rescue with a fine block on the line.

The chances had been piling up for East End, but they couldn’t make them count. Another opportunity to double their lead went abegging when Laura Dooley got on the end of Jenny Brennan’s 36th minute corner, but the midfielder’s stinging volley flashed just wide of the far post.

United’s tempo dipped a little in the early stages of the second half, but they still went closest to scoring. Laura Dooley whipped in a teasing 69th minute cross which was just beyond the outstretched foot of Jenny Brennan.

Ten minutes later they were at it again, Caoimhe Shiel connecting with a Brennan corner, but her glancing header was a whisker away from finding the net.

All those missed chances came back to haunt East End when Tullaroan levelled matters with a stunner. There seemed to be little on when Gemma Komer’s throw-in broke in front of Trish Mullally but the midfielder saw her opportunity and took it.

Moving into plenty of space, Mullally let fly with a long range shot that looped over Jessica Hughes and dropped into the East End net.

The goal stunned United, who had chances to be well out in front by then. They shrugged it off, however, almost restoring their lead with a sparking attack with three minutes of normal time remaining.

Letting Aine Lannon’s deep free run across her path, Aisling Brennan left her marker for dead with a clever spin on the left side of the box. The chance was there for Brennan, but her dangerous shot screamed over the bar.

They didn’t know it then, but that was as close as East End would come to getting their hands on the cup. Heartbreak was just a few minutes away for them. For Tullaroan, it was only joy (and perhaps a little relief!).