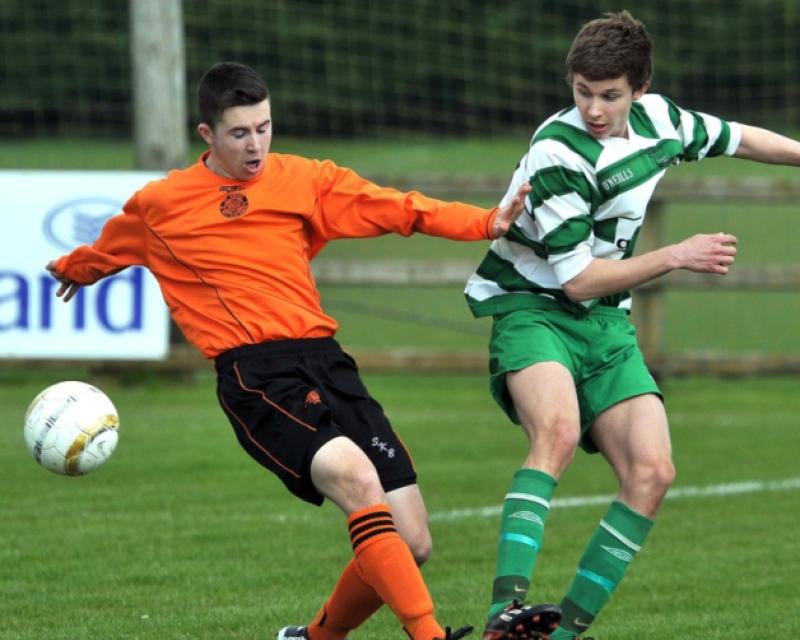 Richard Lowry’s side showed heart as they completed an incredible Easter Monday comeback that stunned St Kevin’s Boys and saw them become the first Kilkenny side to make the national decider.

Two goals down inside eight minutes, rather than wave the white flag Evergreen rolled up their sleeves and left the Dubs reeling with what could only be described as an awesome reply.

“To go two down so early, and against a side like St Kevin’s, was the worst possible start we could have made,” said a very proud Evergreen manager Richard Lowry after the game.

“When you concede two goals so early you think they’ll just see out the game, but the heart in that team is something else,” he added.

“They’ve been together for so long that we’ve seen them come back in games before, but this is a fantastic achievement.”

Such a comeback seemed a distant possibility, especially when a disastrous start saw Kevin’s plunder two goals inside eight minutes of kick-off.

Glen Reddy got the Saints up and running, intercepting a slack ball in midfield on six minutes before sending Stephen Duffy away down the left. The striker could have gone down in the box under a challenge, but stayed up and got his reward with a sweet strike that flew inside the far post.

If Evergreen heads were spinning after that, they must have felt even worse when Kevin’s doubled their advantage two minutes later.

Ross Harrison left the Dubliners in high hopes when he dummied Jason Caffrey’s long throw-in, then turned and connected with the bouncing ball, crashing it into almost the exact same spot as Duffy’s had.

Evergreen’s heads might have dropped after that goal - but they didn’t stay down for long. Ronan Coffey, who tested Jordan Williamson with an early header, gave Evergreen a 15th minute lifeline when he latched on to Ben Hickey’s header and coolly lofted it over the advancing netminder from inside the box.

Coffey was proving to be a real handful for the Kevin’s defence, and played a huge role as his side snatched an equaliser just three minutes later.

Williamson made a mess of dealing with a bouncing Eoin McGovern header. Coming to the edge of his box, Williamson tried to head the ball into a position where he could collect it, but he wasn’t quick enough to prevent Coffey from pouncing.

Trying to take the ball around the netminder, Coffey was hauled to the ground. Williamson escaped a red card, but wasn’t so lucky as Mark Slater hammered an unstoppable spot-kick into the bottom left corner.

St Kevin’s were rattled by that swift Evergreen comeback. The frame of their goal shook too, Slater going close with a long-range free-kick that clattered off the crossbar after the half hour.

Slater had a large say in Evergreen’s resurgence, slotting into the centre of defence, a move that shored up the back four and allowed Dylan Drennan to make his presence felt in midfield.

Piling on the pressure, Evergreen pegged the Saints back and took the game by the scruff of the neck eight minutes from half-time. Picking up play close the box, Coffey cleverly slipped the ball to Ben Hickey, who searched for a gap to break through.

Dashing across the face of the box, Hickey remained patient until he found a gap. Once he had it, he let fly with a low shot, the ball clipping a defender and spinning past Williamson’s outstretched right hand.

Kevin’s were rattled by that goal, but went within a whisker of getting back on level terms before the break. In a well-rehearsed routine, Jason Caffrey and Ross Harrison worked a free-kick between them before teeing up Calvin Madden for a pot at goal. Madden’s 43rd minute strike was a belter, but the ball screamed beyond the top left corner of Evergreen’s net.

Having worked so hard to turn the game their way, Evergreen were determined not to let things slip in the second half. They started on the front foot, taking just nine minutes to double their advantage and leave the Kells Road faithful in dreamland.

Jamie Conway was the architect, splitting the Kevin’s defence with a superb crossfield diagonal ball that picked out Bobby-Joe Walsh on the right. Walsh darted between two defenders, pausing only after he had rounded Williamson and picked his spot in the Kevin’s net.

Evergreen looked good for that two-goal lead but sat back a little, allowing Kevin’s to gain a foothold in midfield. The move saw the visitors regroup, with subs Malike Berruogubi and Dylan Moloney helping to get their side back into the game and set up an intriguing final quarter.

Stephen Duffy also played a part, pouncing on a slack Evergreen clearance and tearing into the box. Duffy took the ball beyond netminder Aidan Tuohy, who did well to hold the man up, but still Duffy found enough space to squeeze the ball inside the left post.

Duffy’s goal meant anxiety spread through Evergreen’s ranks, but they showed great strength to stay in front. Sub Robbie Buckley helped add steel to midfield, while McGovern, Slater and Aidan Tuohy played their hearts out for the cause.

Kevin’s tried their hardest to force an equaliser - Hynes did well to punch a dangerous Berrougubi corner to safety while under pressure - but finally Evergreen could celebrate a victory, a win which set up a final meeting with Nenagh.

“We’ve a final to look forward to, but hopefully we’ll go on and win it,” finished Lowry. “Nenagh are a very good team, but it will be a great match.”