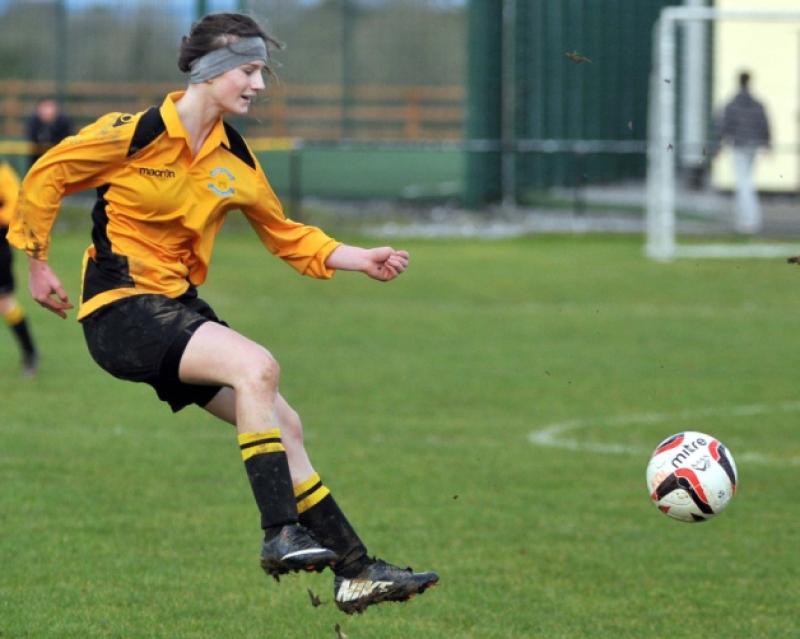 The Kilkenny & District League’s women’s team have a love of silverware - and they won’t let their Leinster title go too easily!

The Kilkenny & District League’s women’s team have a love of silverware - and they won’t let their Leinster title go too easily!

The Cats took another step towards retaining their inter-league crown, and an emphatic one at that, as they clattered Kildare with a bunch of fives.

“The scoreline didn’t flatter the girls,” said a beaming Fran Egan after the final whistle. “We had to wait, but once we got the first goal it opened the game up for us and we started playing a bit more football.”

That first goal, which came after the half our, was a just reward for the manner in which Kilkenny took the game to Kildare.

The Cats were practically camped in the final third of the pitch when play broke to Jenny O’Keeffe on the edge of the box. She let fly with a thunderous drive, which clipped off defender Joanne Kelly and arrowed to the net, leaving ’keeper Eimear Kelly powerless to make the save.

Starting with a solid tempo Kilkenny seized control of the game from early on and never let up. The link-up play between Breda O’Neill and Lauren Valentine proved to be a major problem for Kildare, who almost fell behind as early as the tenth minute.

Sparked by Jenny Reddy’s midfield header, Valentine unlocked the Kildare defence with a clever ball for O’Neill to chase. The striker held off her marker but blasted her shot off-target, letting the visitors off the hook.

The strike partners had another pop at the target soon after, combining with a one-two on the right that left Valentine with room to shoot, but her 24th minute shot was well held by Kelly.

Having waited more than 30 minutes for that opening goal, Kilkenny almost doubled their newfound lead inside 120 seconds. Dropping into the middle, Valentine worked play on to skipper Jenny Brennan, who sent O’Neill racing into the box, but her shot was well blocked by defender Bernie Bowe.

One goal up by half-time, Kilkenny really turned the screw when play resumed. With full-backs Olivia Nolan and Caoimhe Shiel pressed into more attacking roles the Cats put the squeeze on Kildare, a tactic saw them run out convincing winners.

Pouring forward, the Cats doubled their lead on the hour. After a concerted spell of pressure and possession, one where Shiel, Nolan, Jemma Komar and Brennan kept play deep in Kildare territory, the visitors thought they had survived as they kept out Komar’s shot.

They would only hold out for a few seconds more, as the ball broke to O’Neill. She controlled it with her first touch, then used her second to smash an unstoppable shot high into the net.

Both sides rang the changes after that, but Kilkenny’s switches only served to strengthen their attacking threats. Becky Walsh, one of the heroines from the Carlow win, staked her claim for a starting berth when she made it 3-0, showing composure to steer a 73rd minute shot inside Kelly’s far left post after a Brennan corner broke her way.

The three points were secure by that stage, but Kilkenny were hungry for more goals.

Brennan added the fourth, and in some style. After her side were awarded a 83rd minute free-kick on the right side of the box, the Kilkenny captain saw her chance to show off her dead ball skills from distance. The three-woman wall posed little problem, as Brennan lifted the ball over the defence and drilled it into the top right corner.

There was still time for the winners to finish with a flourish. Becky Walsh was the architect, threading a perfect diagonal ball for Brennan to race on to. She barely had to check her stride before latching on to possession, pausing only to pick her spot with a confident finish.

Good as that five-star performance was, it is the youth in their ranks which gives Egan and fellow manager Davy Foley the confidence that their team can go all the way once more.

“Three of the team who started the final last year were on the line on Sunday, but when you look at the young players we had coming through we had to give them a chance,” said Egan.

“Lauren Valentine played up top with Breda O’Neill and looked like she was there all her life. Olivia Nolan started well and grew steadily into the game as it went on. Jenny O’Keeffe has done well in training and proved her point when she scored the first goal.

“It’s fabulous to see such great young talent coming through, but they’ve been able to do that with the help of the older players.”

Topping their group means Kilkenny have home advantage in the semi-final against the Combined Counties. That match, to be played on February 15, can’t come quick enough for a team who are hungry for success.

“The girls are so keen to hold on to their title for as long as they can,” finished Egan. “If they keep playing like this it’ll take a very good side to beat us.”

The women’s team are looking for a sponsor to get on board for the knockout stages of the competition. Anyone who can help provide the squad with kit on their quest for another title can contact Fran Egan, tel 087-8345459.