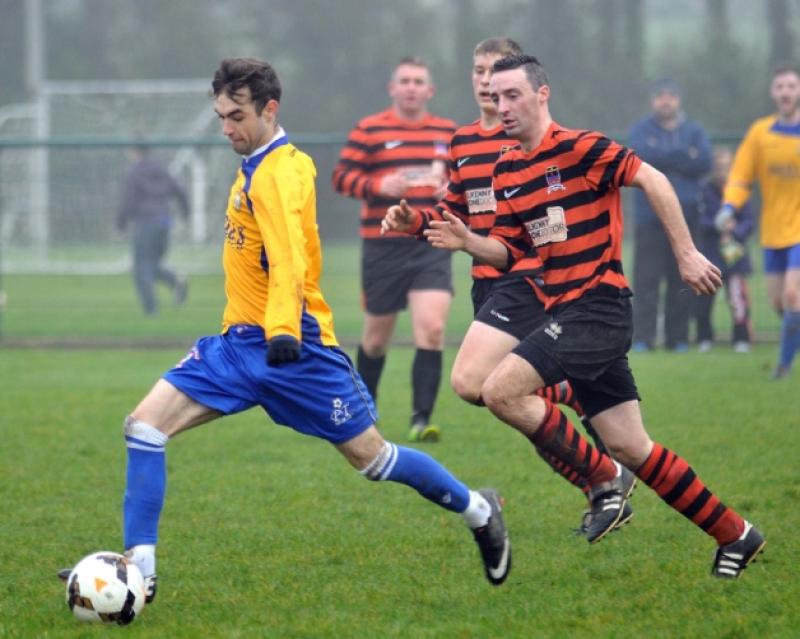 It may have started slower than they wanted, but Callan United’s Premier Division season is finally on the up.

It may have started slower than they wanted, but Callan United’s Premier Division season is finally on the up.

The incoming Division One champions endured a tough start on their return to the top flight, but picked up their second win in succession thanks to a sparkling performance on Sunday.

Simon Burke was the man of the hour, striking twice as Callan took the spoils in an entertaining clash with Bridge United at a foggy Goresbridge.

Just like in their opening win of the campaign, a 3-0 result against the Lions, Callan had Burke to thank for this success. He played the target man role to deadly effect, holding up play until team-mates could get forward – but he also showed he knew where the net was.

Burke’s first big act saw him create the opening goal before the half hour. Quickest to Joey Byrne’s clever ball over the Bridge defence, Burke showed skill and strength to hold off his marker before blasting home a low shot.

The goal came at the end of a spell where both sides had pressed for a goal but, up to then, found little joy.

The visitors hit top gear from the off, but for all their efforts Bridge looked lively in defence. Burke and John Mark Egan linked up well with a swift one-two but Padraig Bambrick slid in to stop Burke from pulling the trigger.

Johna Culhane went even closer when opportunity presented itself on nine minutes. Pouncing after a Hynes clearance fell at his feet, Culhane spotted the netminder off his line and went for goal, but the back-pedalling ’keeper did well to get back and push the ball to safety.

It took the hosts some time to settle, but when they did it almost led to the opening goal. Callan thought they had survived when, after some great pressure from Martin Bambrick and Nathan West, it looked like they had cleared their lines. The danger wasn’t over though, as Sean Murphy latched on to the dropping ball but his shot flashed wide.

Callan’s response was to threaten the Bridge goal through an unlikely source. After winning a midfield tussle with West, Simon Burke took off for goal and slipped the ball out to the incoming John James Egan, but the defender’s shot clattered off a Bridge body.

Once Burke did break the deadlock it was no surprise to see Callan go hunting for a second goal. Robbie Wall went within a whisker of grabbing it, when he stole into the box and got on the end of a speedy Burke cross, but he couldn’t keep his shot on target.

Bridge used that let-off to good effect, driving at Callan as the half reached the latter stages. Murty Broaders was at the heart of their best chances, showing good skill to thunder two dangerous volleys at the target. His first effort fizzed over the bar in the 40th minute. His second, just two minutes later, was well held by Callan ’keeper Owen Wall.

Callan were back on the front foot in the second half and quickly sent out a warning. Burke was involved once more, comfortably controlling the ball on the right before unleashing a fierce 51st minute shot, but Aidan Hynes did well to get down smartly and make the save.

The netminder could do little however, to prevent Burke from doubling his and Callan’s tally with 64 minutes on the clock. Playing with his back to goal, Burke did well to control Tony Delaney’s long ball, then find a gap between two defenders to squeeze off a shot that he tucked inside the far post.

That second goal was the killer blow from which Bridge could not recover. While they continued to push for a way back into the game Callan, with leaders in every department, held them at bay. The visitors could have added to their tally but for Hynes, who made a solid save to deny John Mark Egan and Tony Delaney in quick succession.

Bridge, to their credit, didn’t give up the ghost. Nathan West had the best of their late chances, even clipping the bar with a wicked 78th minute drive, but it wasn’t to be his day, West’s frustrations capped by a second yellow card in stoppage time.