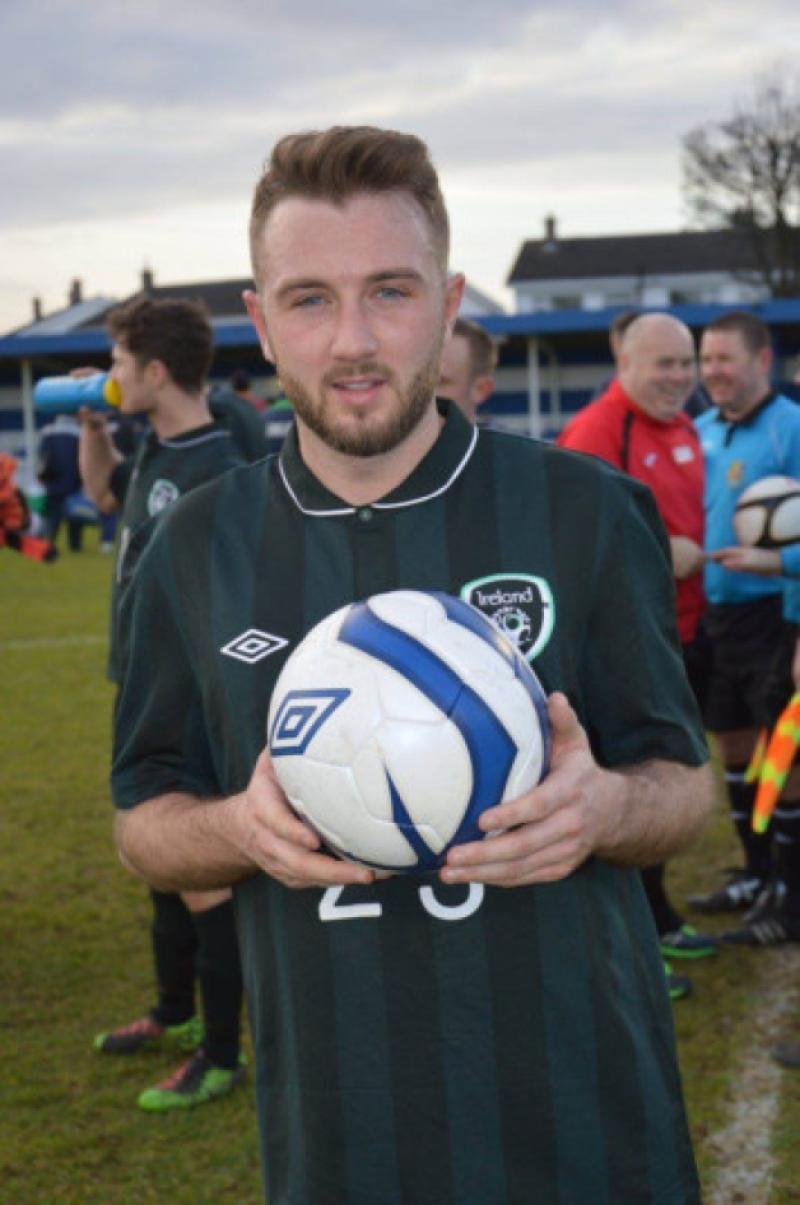 He has scored plenty of goals on the local scene - now David Grincell has made a big impression on the international stage.

He has scored plenty of goals on the local scene - now David Grincell has made a big impression on the international stage.

The Kilkenny striker fired his way firmly into the thoughts of Republic of Ireland manager Gerry Smith when he netted a hat-trick for the Boys in Green against the US Colleges on Saturday.

“I was over the moon to get the call-up,” said Grincell, “but getting the hat-trick in front of my parents, who were watching the match, meant even more to me.”

Kilkenny has provided plenty of international players over the years, something Grincell was keen to continue.

“I’ve seen people like Graham (Doyle), Niall (Andrews) and my uncle Jimmy (Donnelly) play for Ireland over the years,” he said. “You see them going up to play for their country and you want to do the same. It’s the pinnacle of the junior game.”

Saturday’s game was the third time the Newpark player has been summoned for international duty (his previous call-ups were while he played for Evergreen). He didn’t disappoint, but had his work cut out as Ireland trailed the Americans at half-time.

“We had to work hard for the win,” he said. “We were a goal down at half-time (the Ireland Amateur side played the first half before the Junior side took over). There were a lot of good players from Sheriff and St Michael’s so we were always going to be decent, but we gave a great performance.

It took Grincell just seven minutes to make his mark, firing home a 52nd minute equaliser when he controlled a low free kick with his right foot before finishing with the left.

His second goal, one that gave Ireland the lead three minutes later, was a real cracker. Watching a delivery from the right, Grincell gave the US keeper no chance when he met the ball with a thumping right foot volley.

The day got even better when Grincell wrapped up his hat-trick on the hour, curling home a low left-footed shot to push Ireland 3-1 up.

The hosts didn’t let up after that, taking a 5-1 lead before Grincell added an assist to his match performance by setting up the sixth goal for North End’s Adam Beary.

“It was a perfect end to a day which couldn’t have gone any better for me,” he said.

“Before the game Gerry Smith told me the reason I was there was to score goals. He said he wanted at least two from me - so it was great to get the extra one for him!”

Getting the call-up was another big step for Grincell, who also captains the Kilkenny & District League’s Oscar Traynor team.

“I was delighted to captain the Oscar Traynor team,” he said. “It would be great to do well within that competition - Ollie (Walsh, manager), Ronnie (Grace) and Johnny (Maclean) have put in a lot of work with a young squad and they have great hopes for the future. If we were to beat Meath and get a good draw in the quarter-finals who knows where we could go in the competition this year.”

Oscar glory is one target for Grincell, who is also aiming to win a place in the Ireland squad for this Summer’s Quadrangular Tournament.

“There will be a few more friendlies before the Quadrangular,” he said. “Hopefully I can get more call-ups and do well enough to be picked for that squad.”