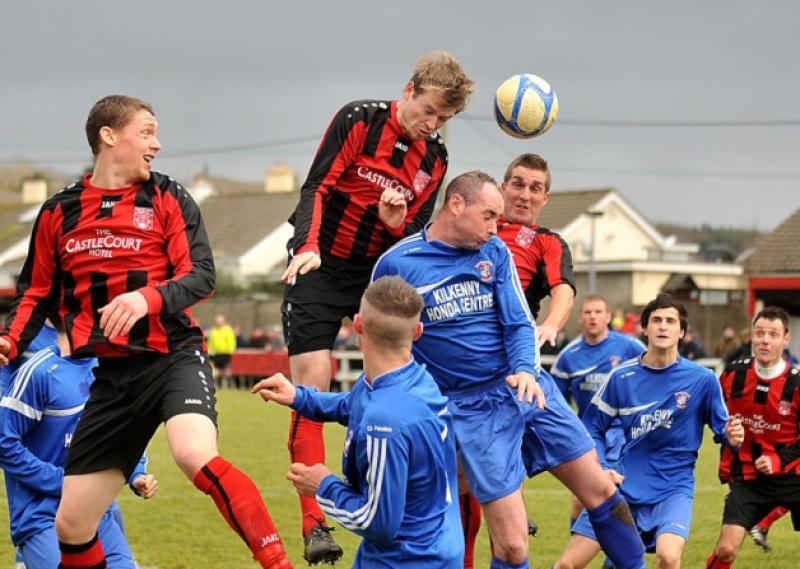 In the end the long road to the Aviva Stadium had too many miles for Freebooters to endure.

In the end the long road to the Aviva Stadium had too many miles for Freebooters to endure.

Having safely come through a tough tie in Donegal, a trip West was the hurdle the Blues couldn’t overcome, as Westport United sent them packing from the FAI Junior Cup.

A week after their Leinster Junior Cup exit, the city side bowed out of the national competition when they came unstuck against the former champions.

In atrocious and extremely testing conditions, the Leinster side acquitted themselves quite well, despite being on the wrong side of a 2-0 defeat.

They can thank their goalkeeper Michael Lambert and the lacklustre finishing of David Hoban for that. While this was not Westport’s best performance of late, they were never truly uncomfortable before a reasonably large crowd at the Horkan’s Hill venue.

Despite playing against the elements in the first half Westport opened brightly and saw plenty of the ball in the early stages. Centre-forward Dave Hoban had a great chance to open the scoring inside five minutes when he rounded the ‘Booters central defenders Julian O’Keeffe and Niall McEvoy, but he stroked his effort harmlessly wide. The hosts had another chance just two minutes later through Philip Keegan, but Michael Lambert got down low to bring off a fine save.

After those scares it was Freebooters who went closest to breaking the deadlock. Paddy Cahill, who brought a good save from Gary Cunningham, did beat the United netminder with his next effort, but he rattled the underside of the Westport crossbar from 25 yards with a sublime curling shot.

That was as close as ‘Booters came to breaching the Westport goal, but Cunningham did well to deny Jason Hennessy soon after. The home side picked up their efforts and got their reward just before the break.

With Westport working the ball up the middle of the park, Phil Keegan gained possession on the corner of the box. He controlled the ball before, on the turn, he drilled a low shot that flew across the face of Lambert’s goal and found the bottom corner.

The strike settled a few tense faces in the Sports Park, and with a big wind in their favour in the second half, there was an anticipation that Westport would remain composed and see out the game.

Freebooters kept pressing for an equaliser but Cunningham, was not the busier of the goalkeepers. Michael Lambert had to be very sharp to keep out a driving effort from Keegan and produced three top-drawer saves to deny Hoban.

While big performances from Niall McEvoy, Cahill and Aaron Molloy kept Freebooters in the hunt, it was all but over when Darren Browne doubled Westport’s lead on the hour.

Finding space in the box, Browne surged at goal and saw his initial shot saved by Lambert at close range. However, the ball fell kindly to the Westport midfielder and he was able to flick it through the grasp of the flailing ’keeper, and watch as it trickled over the goal line. Phil Keegan, in an offside position, protected the ball’s path to the net, but, cleverly, did not touch it, and so remained inactive in the move.