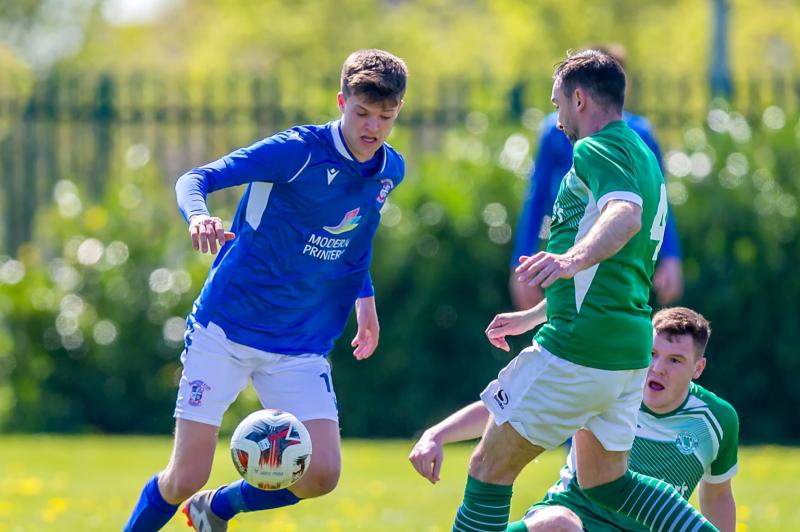 Freebooters made the short trip to Carlow as they took on New Oak Boys in the quarter-finals of the Leinster Junior Cup.

It looked a tight affair on paper and that’s exactly how it developed as both teams played out a four goal thriller.

It was Freebooters who struck first when Jordan Molloy opened the scoring in the 35th minute for the Kilkenny side.

Freebooters maintained that advantage until the half-time break but, within five minutes of the restart, the Carlow side were on level terms when Dean Kelly found the net

The scoreline then remained the same until the end of the 90 minutes as the last eight clash went into extra-time.

New Oak Boys looked primed for victory when Dean Kelly doubled his tally with 10 minutes remaining in the extra period but Freebooters had other ideas and they brought the game to a penalty shootout when Paddy Cahill converted a spot kick in an incident which also saw the dismissal of New Oak goalkeeper Kelan Gaffney.

The forced goalkeeper change did nothing to deter the Carlow side though with the new incumbent producing three saves in the shootout as Freebooters saw their cup hopes go up in smoke as they lost out 3-1 on penalties.

Closer to home, there was four games in the McCalmont Cup with most of the results going to form.

Freebooters’ second string were in action here where they lost out at home to Castlewarren Celtic while Thomastown and St Canice’s sealed their passages with victories over Fort Rangers and Freshford Town respectively.

The final game was all one way traffic as Evergreen went on a scoring spree in their 8-0 victory over Deen Celtic with the likes of Ben Hickey, Mikey Drennan, Andrew Wall and Declan McQuillan getting in the scoresheet.

On the league front Rathdowney’s Clover United had a 4-2 victory over Bridge United in the St Canice’s Credit Union Premier Division.

Ormonde Villa and Evergreen C shared four goals in a high scoring draw in the Junior Intosport.ie Division 1 League while Spa United and Evergreen 46 tasted success in a Junior Division 3 League where Tullaroan and St John’s have already been confirmed as winners and runners-up respectively.