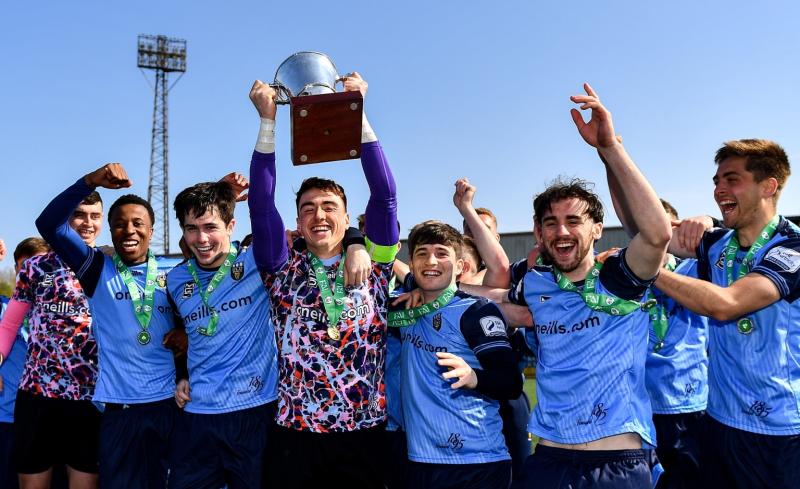 A 10-man UCD overcame Queens University Belfast 2-1 to capture the Irish Universities Collingwood Cup for the 48th occasion in the final at Oriel Park.

The game had barely kicked off when UCD struck for the opening goal, timed at 35 seconds. Midfielder Rossa McAllister fired in the stunning drive from the edge of the box after a beautiful Ciaran Behan pass set him up.

Behan then went on to hit a couple of dangerous efforts from distance that just skimmed the Queens cross bar and Tobi Jinad stuck the side netting as the Belfield side were well in control and looked very capable of stretching the lead.

It was no surprise then when Adreas Djuruus headed in the UCD second goal off the underside of the crossbar from an Adam Lennon corner on 33 minutes.

Queens did test Lorcan Healy with shots from Ronan Young and Lorcan McIlroy but the UCD ‘keeper did well to hold on to both.

The second half began in a similar fashion to the first and Behan fed Djuruus but Conan Doherty made a smart save.

Shortly after the UCD striker picked up a second yellow card after a foul on Smith and received his marching orders from referee Eddie Reilly.

After that blow UCD were forced to defend for a period as Queens seized the chance to get back into the game.

On 67 minutes, McIlroy chased a long ball into the UCD area and cleverly managed to hook it over the advancing Healy and despite Eoin Farrell’s effort to clear the ball, it bounded into the net.

UCD introduced first teamers Liam Kerrigan and Colm Whelan but they got few chances as the Belfield side were mostly on the back foot with Matty Scott dominating in midfield and Michael Gallagher and Gearoid Mulligan playing sterling roles in central defence.

Queens never really looked capable of an equaliser and despite eight minutes of time added on UCD held on to claim their 48th Collingwood Cup, while Queens must wait another year to get their hands on the coveted trophy which they last won in 1985.