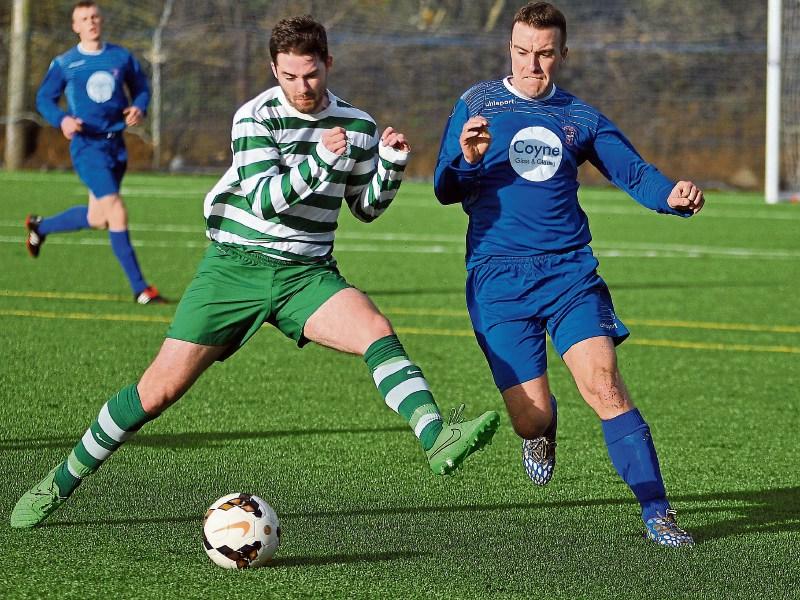 It might be a new year, but keeping up their old habit of winning games helped Evergreen A return to the summit of the Premier Division.

Set-pieces proved to be the key to victory, with free-kicks and corners doing plenty of damage as they put one over their city rivals Freebooters A in an entertaining derby.

The green side of the city was left smiling after a solid performance which delivered plenty in the opening 45 minutes. The big moment came three minutes before half-time, when the hosts doubled their lead.

Having dodged trouble after conceding a number of free-kicks on the fringe of the box, Freebooters were finally undone when Jamie Owens clipped one from outside the left side of the area. There was a little luck, as the ball took a deflection off a defender, before zipping past Craig Cummins and into the far side of the net.

It was a hard blow for Freebooters to take, especially as they had come back from a tough start to really force their way into the reckoning.

Sprinkled with a strong youth contingent – four of the side played 90 minutes for Freebooters Youths against Evergreen less than 24 hours earlier – the Blues made something of a cagey start against their more experienced opponents.

The hosts enjoyed the best of the early exchanges. Chris Whearty sent an eighth minute free whistling over the bar, while Darragh Walshe drew a good save from Craig Cummins, the netminder getting down smartly to parry the 11th minute strike.

The goalkeeper had no such luck just two minutes later however, as a moment of hesitation cost ’Booters dearly. Miscommunication at the back saw ’Booters defender Robbie Hayes leave Jamie Owens’s high diagonal ball drop in behind him. The cross fell just right for Ben Hickey, who dashed in from the right to hammer a low shot back across Cummins and inside the left post.

The goal came in the middle of a good spell for Evergreen, who controlled the flow of the game through midfield, dictating the pace of the game. That led to more chances, the best of which saw Ben Hickey rob Paddy Cahill of possession and set off for goal.

Firing off a quick pass Hickey fed the ball through for Sean Barcoe. His shot took a deflection, wrong-footing Cummins, but the keeper was relieved to see the 20th minute effort spin outside his right hand post.

Gradually Freebooters began to find their feet, with some of their younger players leading the way. Kevin Ireland created their first real chance, latching on to a throw-in and teeing up Paddy Cahill for a strike, but Packie Holden did well to hold his 28th minute effort.

They had another pop at the target after the half hour, when Hayes launched in a teasing ball from defence. Vinny Wallace did well to keep the ball alive before Cian Loy’s curling shot was parried away by Holden.

Their hopes of getting back on level terms before half-time took a knock when Owens netted his late free, but Freebooters could have found themselves even further behind before the break.

Failing to pick up the loose man from a corner almost cost the Blues dearly. Jamie Owens spotted an unmarked Chris Whearty on the edge of the box and duly rolled a quick corner to his colleague. Whearty had time to look up and pick his spot, but his 43rd minute effort flashed over the bar.

’Booters may have stood off their opponents at times in the first half, but they were on the front foot once play resumed. Hopes of a comeback were boosted almost immediately as they struck for a quick goal. Cian Loy was heavily involved, latching on to James Kelly’s pass and spinning on the edge of the box. The ball broke loose from Loy’s possession but it wasn’t all bad – Vinny Wallace quickly snapped it up, coolly slotting a low shot beyond Packie Holden’s reach and inside the netminder’s right hand post.

The goal was just what Freebooters needed, but they couldn’t build on it. They did go close – some excellent touches from Loy and Wallace saw play open up for Sam Watkins, but he slipped and lost his footing just as he was poised to strike from the left side of the box.

After that it was Evergreen who threatened to add to the game’s goal tally through some dangerous set-pieces. Jason Quan had a chance when he got a glancing header to Chris Whearty’s 54th minute corner, but he couldn’t keep his effort on target.

Sean Barcoe went even closer soon after, getting a free header on another Whearty corner, but he powered his effort over the bar when he seemed certain to score.

Freebooters were under pressure, but lifted the siege long enough to give their hosts a fright. A great Sam Watkins ball was worked back across the box by Aaron Molloy for Vinny Wallace to race on to, but Dylan Whearty made a superb tackle to deny the young Blue a clean strike.

That missed opportunity would haunt Freebooters as, within minutes, Evergreen restored their two-goal lead to all but make the game safe.

Once more, it was a set-piece which caused all the trouble. Having gone close with those earlier corners, they hit the jackpot when Whearty whipped in another teasing effort with 67 minutes on the clock.

Darragh Walshe made a real nuisance of himself, rushing the near post in an effort to get to the ball. He didn’t make it, but when play flashed across goal Lee Delaney was well-placed to finish at the back stick.

That goal really took the sting out of the game, but despite dropping down a gear Evergreen weren’t overly troubled. Dylan Whearty almost added a fourth, but saw his header from a Damien Kelly corner crash off the post. It mattered little, as they closed out their fifth win of the season to move into pole position.