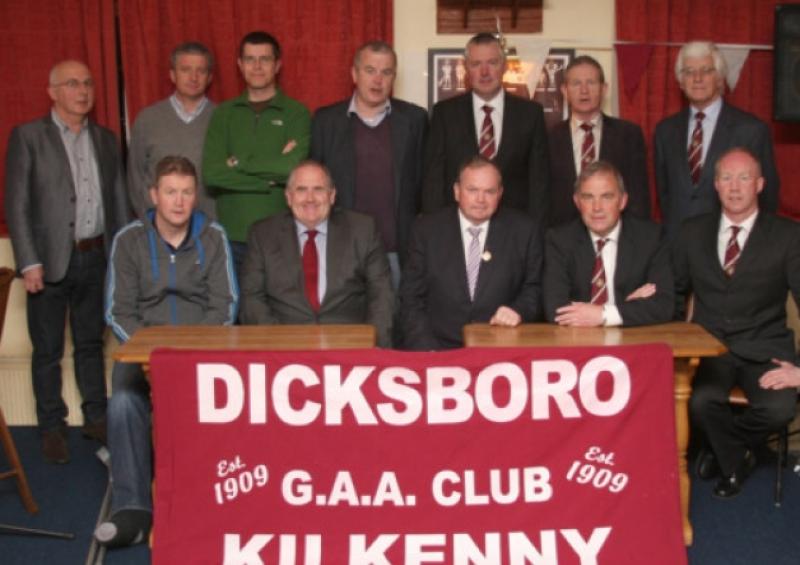 THE notion of inclusion included in the newly lauched dicksboro GAA Club five year strategic plan was something that pleased GAA president, Liam O’Neill when he visited the club in Palmerstown on Saturday night for the official launch of the document a year in preperation. He said he was delighted that Dicksboro had done such a paintsatking and real plan which, won’t gather dust, adding that he felt sure it would be acted upon in the coming years.

THE notion of inclusion included in the newly lauched dicksboro GAA Club five year strategic plan was something that pleased GAA president, Liam O’Neill when he visited the club in Palmerstown on Saturday night for the official launch of the document a year in preperation. He said he was delighted that Dicksboro had done such a paintsatking and real plan which, won’t gather dust, adding that he felt sure it would be acted upon in the coming years.

To emphasise the importance of having a blueprint for the next five years, he used the analogy of the US tourist in Dublin giving out to the Bus inspector telling him the time table was no use because the buses were late. The bus inspector replied: “If there wasn’t a timetable you wouldn’t know you were late.”

There was a huge crowd for the event whichwas attended by a number of county and regional GAA officers. Chairman

of the club, Eddie Holohan thanked all those involved in the preparation of the plan. He outlined how the club is in a very healthy position, catering for players from under 6 to adult level and the fact that the grounds at Palmerstown were among the best in the county. however, he emphasised the need to improve.

Pat Moylan, who was the Chairman of the club’s Strategic Plan committee gave a very thorough slide demonstration, starting with the founding of the club up to the present day. An important part of his message was the involvement the club has with the community and particularly within the parishes of St. Canice’s and St. Mary’s. Pat then went on to explain the framework of the plan which focused on five key elements, Club Structures and Administration, Coaching and Games Development, Finance and Fundraising, Facilities Development and Communications, PR and Community. He thanked the members of the Planning committee, Seamus Rochford, Simon Walton, Frank Morrissey, Pat Carroll, Sean Keane, Patsy Dempsey, Edmund Nolan, Ted Carroll and Tom Beirne.

The assistance of the County Board’s Development Planning committee was acknowledged and the presence of John Comerford, John Buggy and Conor Denieffe at a club workshop in April 2012 was very much appreciated and formed the catalyst for the implementation of the plan.

Conor Denieffe addressed the crowd and spoke about the grerat work being carried out and wished the club well going forward andmentioned the fact that five club members started for the ccounty minors in the Leisnter  hulring championship on Friday night.

His views were echoed by the Chairman of the County Board, Ned Quinn who spoke of the key role that Dicksboro GAA Club plays within the county and importance of having strong clubs in the city. He thanked the club for their involvement and assistance to the County Board and the the Cuddihy family. He said he had never realised that Cillian Bickley had Cork, Kerry and Kilkenny blood in him and he was mosty impressed with Dicksboro having read Gerry O’Neill’s excellent club history during the week.

GAA President, Mr. Liam O’Neill was very complimentary on the club’s production, particularly focusing in on the fact that the plan states that it would be continuously revisited during the five years to ensure that it would be kept fresh and up to date.

He must have felt at home when he entred the club rooms because a Laois jersey was pinned to the back of the main door and the first thing he did was have his photo taklen with three fellow Laois man who have made a huge contribution to the club: Seamus Rochford, club treasurer; Mick Byrne, groundsman and Patst Dempsey musician and former juvenile secretary.

Following the speeches, Club Chairman, Eddie Holohan made a presentation to Mr. O’Neill as a token of the club’s appreciation for his attendance on the night and also to Tom Beirne who put in countless hours on the design and layout of the book, which will be distributed to every family in the club. Light refreshments and music followed to end yet another important and memorable event in the