’Angel was the darling for punters 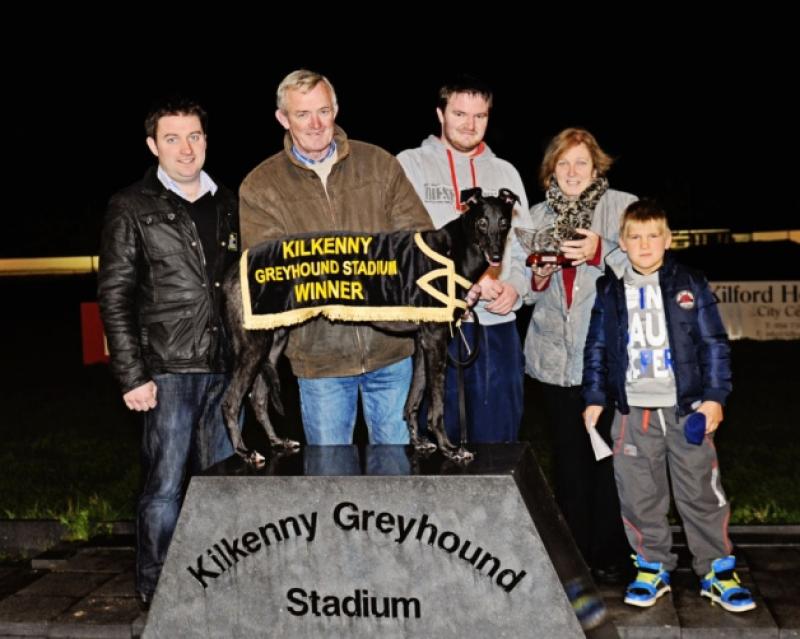 There was a good crowd present for racing at Kilkenny track on Friday night, despite the wet weather. Once again, the track was slow and this time it was rated .40 slow for the 525.

There was a good crowd present for racing at Kilkenny track on Friday night, despite the wet weather. Once again, the track was slow and this time it was rated .40 slow for the 525.

The front two pulled away with Locnamon Angel holding just over a length of a lead. Shunters Gizmo kept trying but local favourite Locnamon Angel (Royal Impact-Locnamon Belle) saw it out by two lengths in 29.15 for owner trainer Ger Langton.

Flomur Antics clocked the fastest time as he won the fourth heat of the a3 stake. There were also wins for Some Duke and Garryglass Sheba in the stake, while the opening heat was declared void after one of the runners raced with a kennel coat still on.

Amcas Pines got a dream run up in the novice Track Supportres Club final as Courageous Boy moved wide from trap 2. Courageous Boy struggled on the bend and this allowed Amcas Pines into a two length lead at the second.

Piccadilly Tiny flew out and made every yard of the running in the second race. In front around the first, Piccadilly Tiny was three lengths to the good turning down the far side. Bobs Land tried to make a race of it but the well-bred Piccadilly Tiny won easily by six lengths in 29.64.

Arrigle Hi came away running and led to the first in the a4 525. Kilgraney Cady showed early pace to follow Arrigle Hi around the opening two turns.

There were two lengths in it at the second bend but Kilgraney Cady was unable to bridge that gap. In fact, it was Arrigle Hi who kicked on in the latter stages to oblige by six lengths in 29.51.

Race 4, the Niall Comerford Memorial a3 525 round 2, heat 1 was declared void. It will be re-run on Wednesday night.

Kellymount Gem, fastest winner of the opening round in the Niall Comerford memorial a3 525, was sent off 4/6 favourite to follow up that success. Condor Star and River Gem started well with the latter leading around the bend.

Some Duke followed River Gem, but was a length in arrears. River Gem held that lead to the last bend where the field closed up and four dogs bumped. Some Duke came out best and went on to defeat Condor Star by a length and a half with Kellymount Gem a further head back in third. The winning time was 29.69.

Garryglass Sheba showed nice early to lead Hughs Comet around the first bend. The leader was much sweeter between the bends and streaked four lengths clear. Garryglass Sheba remained in control.

Kilara Belle stormed home from well off the pace but Garryglass Sheba was home for favourite backers by two and a half lengths in 29.54.

The fastest time was posted by Flomur Antics in the fourth heat. Flomur Antics got a clear run and easily got the bend ahead of the pack. Anyone who backed Flomur Antics had little to worry about. He raced away from the opposition.

In the end, Flomur Antics romped home by nine lengths in 29.03 with Mt Leinster Link a distant second.

Mister Bates challenged into the third as Raheen Rondo made eye catching progress. As Mister Bates hit the front, Raheen Rondo found his path blocked by a retreating Natureofthetrade. The Darragh Morrissey trained Mister Bates took advantage to win in 29.61.