Seconds out for boxers - let the Battle of the Barony begin! 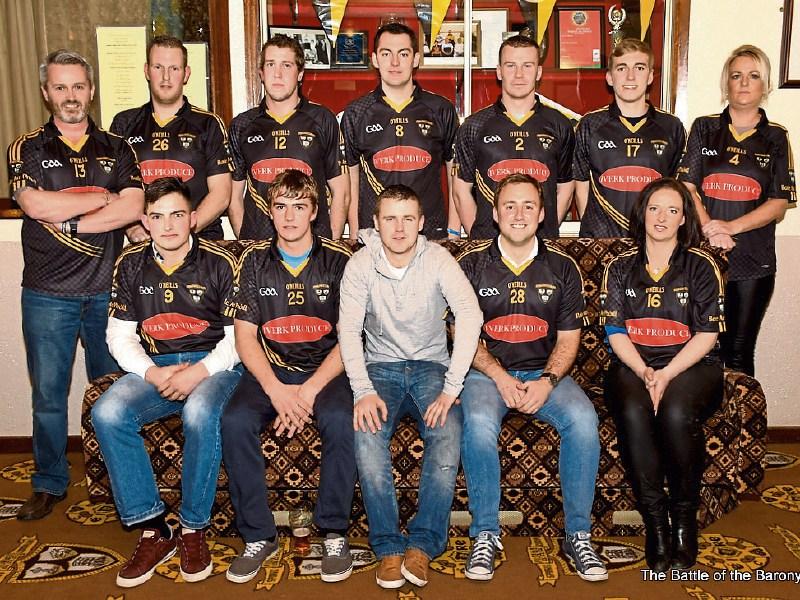 The white collar boxing craze has reached the furthest extremities of the county - Mooncoin and Piltown!

If memory serves me correctly, this column highlighted the very first outing for white collar boxing at a tournament in the Kilmacow Community Centre a few years ago when the local GAA club faced Mullinavat in a brilliant night’s entertainment.

Nobody was injured that night (maybe there was a little pride dented) and it culminated with a fine pile of badly-needed cash on the table for both clubs after a terrific night of entertainment.

Hopefully, something similar will be the order of the night when the boys in green and white from Mooncoin face off against the lads from Iverk Country in their black and amber singlets this February.

I feel that the upcoming Mooncoin versus Piltown encounter will be somewhat different, in that this meeting is not all about boys being tough boys - at least two, if not three, girls from both clubs will swap leather on the night in question. Everybody in both ends of the baronial spectrum will want to be part of an event that will ultimately give the bragging rights to one side or the other in what is being billed as the Battle of the Barony.

Nice one, don’t you think?

Can’t you imagine the adrenaline rush abounding on the night when the tournament kicks off? Having been to a few of these nights, people are generally at pains to point out that it is only a bit of sport, to make a few bob. Believe me, it will be a touch more - and then some. That is why even the girls from each club have been willing to get into the ring against each other for the honour, glory and financial gain of their respective parishes.

I cannot remember any such tournament involving the fair sex stepping into a boxing ring except to carry the round number around the perimeter of the ring. But not this time. This is the real deal. They have been planning this for quite a while down Mooncoin way. Six months really, according to Tom Murphy. Ditto Piltown, but let’s talk to the very approachable former All-Ireland and Kilkenny club championship winner.

Mooncoin have a very progressive and entrepreneurial social committee in their club who do quite amazing things when needed.

“The group is very professionally led by Lucy Quinn, who spares no energy in getting things done properly,” said Tom. “We sit down at the start of the year and make out a kind of bucket list of things we would wish to achieve for the club.

“You have given us plenty of publicity on such things as our fun run, family fun days and various card games, especially around the Christmas times; you may also remember the ‘buy a block’ scheme. All of those social events have provided much-needed financial support for our club, and I don’t have to tell you about the demands now being made on clubs even to survive.

“We felt that we needed to come up with a major enterprise this year, and the idea was sprung at a Committee meeting about this White Collar boxing phenomenon,” he said. “We debated the merits and demerits of possible opponents if the idea were to get off the ground. Some smart person - “not me,” he said laughing - came up with the idea of the Battle of the Barony trademark.

“Mooncoin and Piltown are townlands of the same Barony of Iverk. Contact was made with some of the Piltown people. We fired the idea at them, they went away, thought about it and bingo, they came back with an agreement.

“We were all too aware that the Piltown people might not be too enthusiastic about this idea given that they had come off a magnificent Piltown Comes Dancing fundraiser only a few weeks previously. By all accounts, they had amassed an astronomical financial return from that which was split between the three local schools and the Enterprise Centre.

“We thought that they might not have the appetite to go with another major fund-raiser so soon afterwards and we would have quite understood,” said Tom. “To their credit, they were very positive when we met them a few weeks later. Once they told us they were in, we had lift-off!”

Talking to Mary Morgan, she reiterated the same story. Mary, a very determined and well-organised PRO, is one of the real jewels in the Piltown crown. She never misses an opportunity to dispel the Piltown hurling gospel if it is necessary.

“We had a big decision to make, given that most of our extraordinary people had gone through hoops with the ‘Strictly Come Dancing’ project, but there was never a doubt that we wouldn’t run with the boxing fund-raiser,” she said.

We caught up with both parties in the Mooncoin GAA Complex recently, as they were approaching the final round in their preparations for the big fight night. We met with Lucy Quinn, Tom Murphy, Jamie Dunphy, John Lennon, Nicholas Fewer, Joan Daly, Margaret Henebery, Claire Walsh and more from the Mooncoin camp; their enthusiasm was matched by the Piltown contingent like their Chairperson Siobhán McCarthy, Philly Kenny, Jimmy Walsh, Stephen O’Brien, Fergal Knox et al.

The enthusiasm from both camps, even in the early stages, was akin to a Las Vegas pre-fight promotion - and information was not scarce. For a start, the bouts will take place in the larger Mooncoin Complex, where the ring will be centred mid-floor, ensuring that all patrons will practically have ring-side viewing and comfort.

At the time of going to press it is expected that there will be a 14 or 15-bout programme on the night. At least two of the bouts will feature women boxers. One of the Piltown female volunteers was the All-Star camogie queen, Katie Power, but she has had to withdraw on medical advice as she is in need of knee surgery.

All of the contestants will embrace a very strict training schedule which will initially centre in Mooncoin, but will transfer to the Piltown GAA Complex where a ring will be erected three weeks before the event.

The training will continue within the ring, before the entire show will be transferred to the Mooncoin complex for the tournament. All boxers will be trained by Urlingford’s Eddie Healy, a former Leinster and Irish international boxer. Overseeing the entire operation will be Cathal O’Grady, the CEO of White Collar Boxing.

Training started today (Wednesday) under the watchful eye of Messrs Healy and O’Grady. The same duo will evaluate the abilities, physical attributes and capabilities of all contestants. At the official weigh-in, which will be held at the Piltown Complex on Saturday, January 23, the contestants will find out with whom they have been matched.

Believe me, shortcuts to victory would be a very foolish ambition. As the man says, fail to prepare, prepare to fail - knowing some of the guys involved, I don’t imagine how they could not be serious about what is laid out for them.

If you have not experienced a White Collar night, you have a treat in store for you. Let me give you a smattering of what to expect. Boxers will be announced to a fanfare of dry ice, flashing coloured lights, the theme song from ‘Rocky’ blaring out from the speakers. You have mentors protecting their boxers from the baying hordes, fighters walking to the ring dressed in flashy coloured silk-hooded dressing gowns, swinging their heads, arms and legs on their way to the ring.

It is pure theatre; believe me, those guys and gals will be hyped up by the whole theatrical occasion. Mooncoin has no idea what is about to hit them! I will certainly guarantee that you will have a night to remember on Saturday, February 20.

Both clubs have been more than generously sponsored by two of the most iconic business in their Barony. Iverk Produce and Glanbia would be hugely involved in the area for a very long time, and are never far from the vanguard of support down in that area when sponsorship is on the menu. Both were asked to be the main sponsors for this event and, true to form, were only too delighted to get involved.

While the cost of the event is being generously absorbed by the two main sponsors, both clubs have also engaged pockets of helpers to seek sponsorship for the boxers, thus enabling the fighters to give their absolute attention and full concentration to getting into the ring in the best shapes of their athletic lives.

Many other major sponsors are hopefully coming on stream, and one would expect that recognition of their support will be well admired and recorded appropriately. All contestants will tog out in their club colours, with the names of the main sponsors emblazoned on their singlets which will be provided by White Collar Boxing.

It is expected that there will be an attendance of somewhere in the region of 800 patrons in attendance on the night. Approximately four rows of seating will surround the ring area on the night, to accommodate the sponsors. It will be standing room afterwards, with admission set at €20 (no concessions). Bar facilities will be in operation, manned by professional bar people from Piltown and Mooncoin.

Write the date into your diary and don’t miss it - the stories you will hear afterwards will most certainly be a fabrication of the real deal, depending of course on what side of the barony is telling the tale.

Seconds out and let battle begin - I just can’t wait!

More details will be available over the next two months via Facebook (Battle of the Barony) and Twitter (@BaronyBattle).

For further details on the fund-raiser, people can contact Claire in Mooncoin at clrwalsh@hotmail.com or Mary in Piltown at pro.piltown.kilkenny@gaa.ie.