It's 'heads you win' for Evergreen 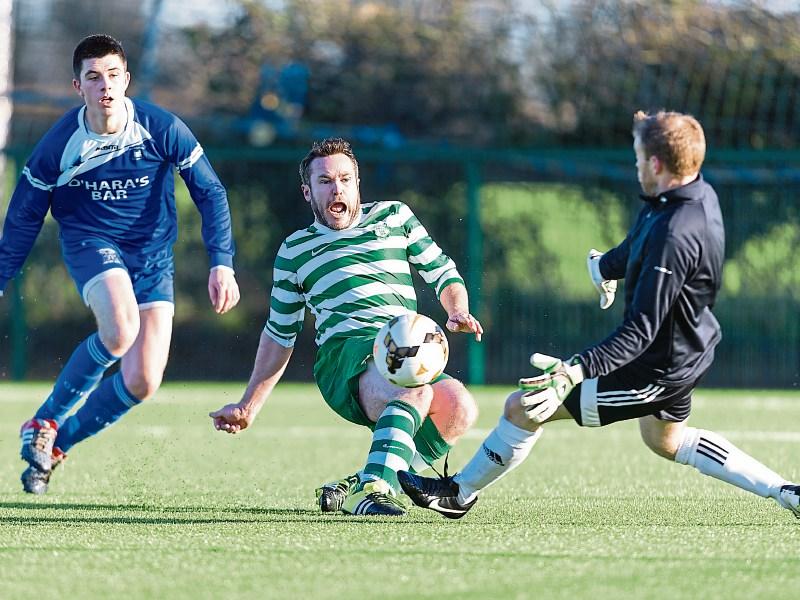 It may only be January, but have Evergreen A taken a huge step in their quest to reclaim the Premier Division title?

A week after securing city bragging rights against Freebooters A, Packie Holden’s side scored another morale-boosting win when they saw off reigning champs Thomastown United A.

And, just like last week, it was Evergreen’s prominence from set-pieces that paid off in an interesting battle on the Kells Road on Sunday.

The hosts had been under the cosh at times - United had some very, very good chances in the opening 45 minutes - but they silenced their opponents 10 minutes after the restart.

Evergreen’s threat from corners was something Thomastown had focused on, but they couldn’t stop Lee Delaney from losing his man to powerfully head home Chris Whearty’s inswinger.

That goal did more than leave Thomastown trailing – it really knocked them out of their attacking stride.

United had been frustrated on their last visit to the Kells Road (they dropped their first points of the season in a 2-2 draw with Evergreen B) so they were determined not to let things slip this time.

Right from the early stages, Thomastown went looking for the goal that would give them the edge on their hosts. After a tepid start – both sides seemed to size each other up in a series of midfield duels – it was United who made the first move.

Andy Kavanagh and David Prendergast were the catalysts, linking up well to lay the ball off to Mick O’Neill on the left side of the box. A gap opened in front of O’Neill, giving him a clear sight of the far post, but his 15th minute shot flashed wide of the mark.

Good as that effort was, United should have done better with their next chance 60 seconds later. Sent on his way by Eoin Manning’s zipped ball down the right sideline, Eamon Lyster threaded a low inviting ball into the box.

It fell at the feet of Prendergast, who should have hit the target from close range, but he pulled his shot outside the post.

The visitors continued to hold the upper hand when it came to creating clear-cut chances, forcing Evergreen’s defence to really put in a shift.

A massed effort denied Steven Connolly from close range after 21 minutes, before netminder Packie Holden was called into action, the player-manager backpedalling to tip a teasing Michael O’Neill cross over the bar.

Evergreen were under the cosh in that first quarter, but proved they were still a threat. A swift 27th minute counter-attack proved as much, Holden sending Chris Whearty racing away with a quick throw-out. Whearty sped down the left, drilling a ball into the centre for Ben Hickey, but Paul Dunne dashed from his line to snuff out the danger.

That scare forced Thomastown to step up a gear and should have led to the opening goal. There was a little luck when Dunne’s booming 33rd minute kick-out broke kindly.

The ball bounced just right for Prendergast, who turned his marker and got off a strong shot, but Holden got down to tip the ball around his right post.

Prendergast was heavily involved again after 41 minutes, feeding Lyster to cleverly flick the ball into the box. Steven Connolly took a touch to steady himself, but before he could strike Oisin Corr dashed in to make a telling block – a first-time strike could have made the difference.

That miss almost came back to haunt Thomastown as, two minutes before the break, Evergreen went within a whisker of snatching the lead.

Seizing on some defensive hesitancy, Brian Jordan pounced on the ball and nipped into the box. Drawing Dunne from his line he beat the keeper with a curling shot towards the far right post, but the ball skipped agonisingly wide.

In the end that miss mattered little, as once Evergreen took the lead they never looked back. Lee Delaney’s goal changed the complexion of the game as, all of a sudden, the visitors looked deflated and out of ideas.

They weren’t helped when Evergreen doubled their lead on 78 minutes. Sean Barcoe, who had earlier steered a free header at Dunne, made no mistake when he stormed free to powerfully head home from a Damien Kelly corner.

Worse was to follow for the visitors, as sub Simon Burke bagged a third with an 84th minute header – three headers, three goals, three points.