Glenmore storm through Leinster, and they want more 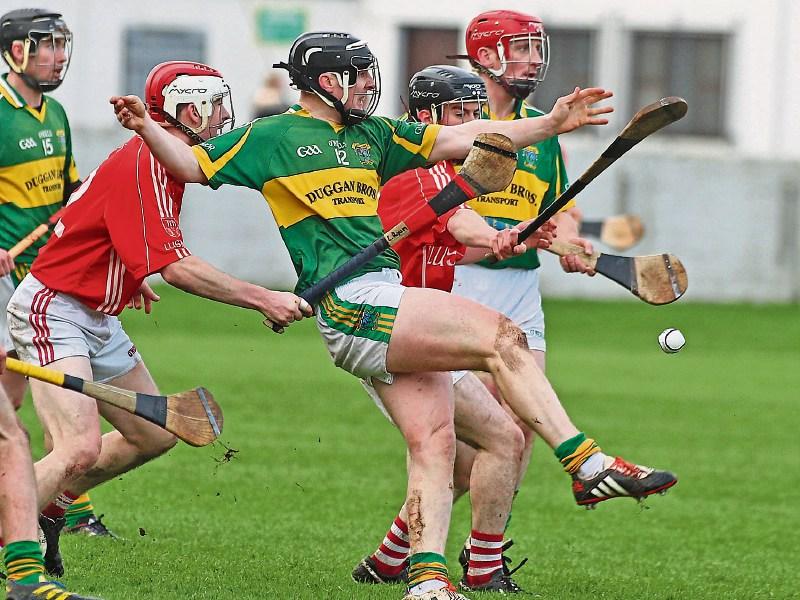 Job done, so let’s move on! That was the business like tone from Glenmore captain and All-Star, Ger Aylward, after the South Kilkenny outfit swept to an easy win in the Leinster club junior hurling final.

“The Munster champions in the All-Ireland semi-final is what this competition is all about for us now,” insisted the sharp moving attacker who made light of the cold weather and gripping turf after lapping up temperatures of over 30 degrees less than a week earlier while on holidays with Kilkenny in Phuket, Thailand.

What will be tough semi-final opposition will be provided by Munster champions, Dungourney (Cork) in the WIT on Sunday (2pm).

Aylward and his Glenmore colleagues hit the ground running in the Leinster final in O’Connor Park, Tullamore on Saturday.

Within the opening two minutes Aylward registered two scores, and from there on limited Lusmagh (Offaly) were chasers and their threat was limited enough.

The tally of scores at the end showed that the losers relied on fine free taker, Paul Kinsella, for 12 of their points, while the only one registered from play was by midfielder, Sean Gardiner, and that came two minutes from the end.

“It was a great win for the club, a tough old battle during the first half,” insisted Aylward, whose club became the 11th Kilkenny winners of the provincial title.

“We gave away some silly frees in the first half, but at half-time we said that if we cut out the frees we had a great chance of winning. In fairness to the backs, they were very disciplined afterwards.

“The club couldn’t ask for much more at this time after adding the Leinster title to the Kilkenny one,” he continued.

“We have been hurling for nearly 12 months now. It is a long time, but is is really enjoyable when you are winning.”

He explained that the hotel the Kilkenny party were staying in Phuket had a gym that was open 24 hours a day, and Eoin Murphy and himself enjoyed a few sessions there and they did a bit of jogging on the beach a number of times too.

“We looked after ourselves,” he insisted with wry smile, before adding: “we enjoyed it as well. It was a shock to the system when we stepped off the plane and the temperatures was down from over 30 to two degrees. The tan was soon lost.

“I was back at work straight away and I soon got used to the cold weather. It is great to be in the All-Ireland series.

“You have to go back to the Eddie and Willie’s (O’Connor) years since the club won anything like this.

“There can be no talk about Croke Park and the All-Ireland final. We have a big test on Sunday and we can’t allow our minds to stray to anything else.”

There was a nice look about Glenmore. They appear to have improved since winning the Kilkenny title.

Their touch was more than decent, and the way the team gelled as a unit hinted at a crew that is growing in confidence.

If one could make a minor criticism of Glenmore it was that they didn’t bury the opposition earlier. Lusmagh never looked like winning, and their one half chance of a goal came in the first period as a result of a Glenmore error.

Still they were left hanging as a danger, especially in the first half.

The likes of Aylward, Eoin Murphy and Richie Mullally always looked comfortable and a cut above the rest , while Shane Murphy, Mark Phelan and Colm Doherty were good too.

However, all assessments must be measured in the context of the opposition, which was average.

Glenmore can only beat what is in front of them, but extending their unbeaten run won’t do the team any harm at all.

As mentioned earlier, Ger Aylward opened the scoring with two quick points. Alan and the elusive Eoin Murphy, who made a couple of daring runs through the heart of the opposing defence, added another brace before Lusmagh opened their account with a free from the deadly striking Paul Kinsella.

The winners one real chance of a goal arrived in the 13th minute after two home defenders collided on the right wing about 35 metres form goal and a huge gap opened up.

Aylward charged in from the left at the road end goal. His low delivery across the face of the goal was met by Michael Phelan, but the latter rushed the effort and put the ball wide.

When the Cats edged 0-9 to 0-4 clear they looked to be ready to close out the game early. However, they lost their way and allowed Lusmagh and Kinsella plunder two scores before Eoin Murphy rounded off the exchanges with a late point to leave Glenmore leaders by 0-10 to 0-6 at the break.

During the opening five minutes of the new half Eoin Murphy (2) and Aylward, from way out the field, added to the Glenmore account as the home side began to fade.

Glenmore maintained a steady and disciplined rhythm from there home, and that was enough to leave them celebrating at the finish.